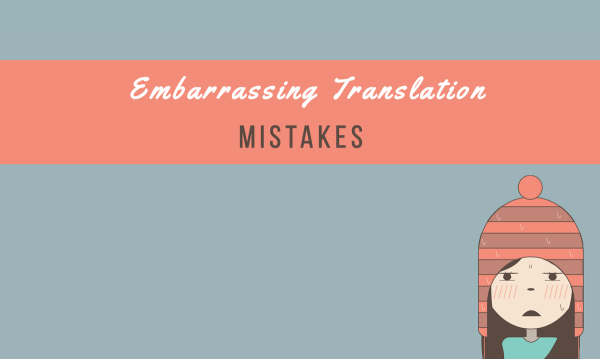 Have you ever had an embarrassing translation faux pas that is so cringe-worthy it made you want to duck to the nearest restroom and hide there forever?

Or probably pronounced a French word so inappropriately that it made everybody snicker?

French words, with its subtle nuances and undertones, is quite easy to bungle.

You might be saying something that you think is totally innocent, but the word you choose or a slight error in your pronunciation could all too easily make you sound like a horndog pervert…or even highly rude and offensive.

Don’t worry, you’re definitely not alone. Stuff like this happens to the best of us.  But to avoid awkwardness from happening ever again, you should take a look at this list of words and phrases we compiled.

So without much ado, let’s get on with the list.

You probably mean you’re not feeling well and your temperature is hot. After all, Je suis chaud = I am hot. Right???

2. Preservative is not preservatif in French

Imagine you’re sitting in a table with your French-speaking friends, and you’re giving a completely impassioned speech about organic food and the use of too much preservatives in food nowadays. You use the French word preservatif because of course, what else could the word be?

Sorry to rain on your parade, but while preservative and preservatif may sound alike, it’s one of those back-stabbing “false friends” or cognates. Preservatif actually means condom in French. When you need to talk about food preservatives, use the French word “conservateur” instead. Otherwise, you’d ruin your perfectly sensible tirade by suddenly including condoms in your conversation.

English speakers usually say “she’s good” or “you’re good” in a general, offhand way, without having to specify what the person is good at. Like when someone shows off his/her talent and you just blurt out, “wow, you’re good!” This does not translate well to French however.

When speaking French, you have to be specific about what the person is good at or else it could be misinterpreted as you saying how he/ she is good in bed.

4. “Introduire” does not really mean “introduce”

This is another one of those two-faced false friends. Though introduire looks the same as introduce, they don’t mean the same thing.  Introduire means “to insert/ to enter”.

Let that sink in for a while.

You’re excited. We get it. When you’re speaking in English, it’s perfectly fine to just squeal, “I’m so excited!” Don’t do this when you’re speaking French. Saying “Je suis excité(e)” could be wrongly interpreted as you squealing and jumping up and down about how sexually aroused you are.

Instead, you need to include in the sentence what you are excited about to avoid any raised eyebrows and incredulous looks around you.

In relation to #5, it’s easy to think that “c’est excitant! “ means “it’s exciting!” But the French could take it to mean you’re feeling sexually aroused.

Let’s say you’re out with friends for a night around town. During dinner you declare that tonight, you would like to enjoy yourself. You say, “je veux jouir !” thinking it means, “I want to enjoy!” Everyone smother their laughter and think how brazen you are.

Well, it seems like just another harmless sentence, right? Though jouir is the more formal verb that translates to “to enjoy”, you’ll have to be careful and make sure to use it in the proper context. Otherwise, you’d be saying that you want to have an orgasm.

This is an idiomatic expression that literally means “to take one’s foot”. And though its meaning is rather innocent, which is “to take pleasure at something” be careful when using this term because it has underlying sexual connotations.  It has an innuendo that means “to have an orgasm”.

9. Envie is not always the same as envy

When you say “J’ai envie de toi”, you’re not really saying that you envy someone. Instead, you mean you desire or you want him/her. So you should just say you are envious (envieuse/ envieux) or say instead “je t’envie”.

Since the word kiss in English can work both as a noun (a kiss) and as a verb (to kiss), it’s easy to think the same thing with its French counterpart. After all, the word baiser can both be a noun and a verb  too, right?

Oh, you sweet summer child. It isn’t the same. While un baiser does mean “a kiss”, baiser used as a verb means to shag or to f*ck. Totally not the same at all.

If you need to say “to kiss”, as in the verb, use the verb embrasser instead. You can also use its reflexive form s’embrasser which means to kiss each other.

Other words related to “kiss” are: un bisou (a slang term for kiss), une bise (the kiss on the cheek the French use for greeting people), and un patin (kiss that uses tongue, or what English speakers refer to as French kiss).

Chatte is just a harmless female cat, right? Well, yes, but it’s more than that, too. Same as its English counterpart, the feminine version of the word cat in French could also mean the female private part.

12. Cochonne has another meaning, too

Cochonne means a female pig in French. In other languages, pig could be a term used to say how someone eats too much or acts like a slob. But in French, the term cochonne is a rather vulgar term used to refer to a woman who loves sex in a dirty way.

It’s quite easy to mistakenly translate the English expression “it sucks” or “he sucks”  to its literal translation in French. But doing so would be very weird and vulgar. In French “sucer” (to suck) mainly has a sexual meaning and isn’t used in the same manner as its English counterpart.

To say something is lame, you can say “c’est nul !” To tell someone he is lame, say “t’es nul/chiant”. To point out that something sucks, say “ça craint !”

Let’s say you had a huge lunch with your French friends. You want to tell them you’re so full, so you say it in French as “Je suis tellement pleine !” They all stare.

Why? What’s wrong with what you just said?

Well, my dear, you have just informed them that you are pregnant. If you’re not pregnant at all and it’s just the two servings of dessert in your stomach and not a baby, you can perhaps just say “j’ai trop mangé” (I ate too much) instead.

15. Queue could mean something else entirely

Queue in French has different meanings: 1) a waiting line; similar to how the word is used in English, 2) an animal’s tail… or 3) the more vulgar slang term for the male private part.

So be very, very careful when using this term.

Let’s check out a rather awkward scenario between two girls, as an example.

Non-French girl: I went to see the concert.

French girl: How was it?

The non-french girl wanted to say that the line was very long, but missed out y between il and a. As a result, she instead announced that the guy in the concert was well-endowed.

We have just listed 14 different translation mistakes. But what about those wrong pronunciation that could land you in hot water? Here let’s take a look at those as well.

They both look and sound almost the same but baisser means to reduce or to lower, and baiser means… you already know what it means.

To distinguish between the two and to make sure you use the right one, remember the following rules:

Baisser (double S): pronounced with an S as in beh-Say

Baiser (single s): pronounced with a Z as in beh-Zay

There. That should keep you from hair-raising embarrassment.

Be careful in pronouncing these two as you don’t want to mix up a simple “when” (quand) and “idiot” (con). Can you imagine how awful it would be if you thought you’re only saying quand but the person you’re talking to thinks you just called him con?

To avoid any misinterpretations, take note of these pronunciation differences:

Quand: pronounced as kon[d]; note that the letter d is very subtle.

Con: pronounced as ko[ng]; note that the ng is almost silent.

This one is another common facepalm-inducing mistake. They sound somewhat similar but are two very different body parts. Cou is neck and pronounced as koo; while cul is ass and pronounced kew.

Another pair of terms that could land you in trouble when you pronounce it wrong, so once again, be very careful. The first one—beaucoup—is a harmless word that means “very”. The other one means “nice butt” or “nice ass”.  To avoid saying “thanks! nice ass!” when you say merci beaucoup, remember that beaucoup is pronounced as bo-koo while beau cul is bo-kew.

It’s easy to slip up and erroneously pronounce the famous museum Musée du Quai Branly. But make sure to say it as bran-lee and not bran-lay. Branler (pronounced as bran-lay) is a slang term for touching yourself.

So, can you see? A small mistake in pronunciation would give an altogether different meaning when you ask for directions to Branly.

Canard means duck and connard is a vulgar term that means asshole, jerk or schmuck. Be very careful not to confuse the two. Otherwise, you’d think you’re simply discussing what to order while the people around you would think you’re muttering invectives.

To avoid this error, try to remember the following pronunciation differences:

Canard is pronounced as kah-nar.

Connard is pronounced as ko-nar.

This one was submitted to the Talk in French Facebook page by a lady named Paulette. One of her fears is when the printers in her office would break down and she would have to explain to technicians that there is a problem with colored printing.

It’s a legitimate fear, and we’d have to agree! While en couleur is a rather innocuous term that means “in colour”, enculer is anything but. It means something offensive like “motherf*cker” or the sexual act that involves the behind. Avoid this with the following pronunciation tip.

En couleur: en koo-LEURR (try to accentuate the “leur” part at the end of the word to avoid any confusion)

Please note that this phonetic pronunciation for this last one is not very spot on. But you can listen to the pronunciation in audio in the article 30 Difficult French Words to Pronounce: Part 2.

Do you have additional embarrassing words to add? How about some toe-curling, blush-worthy anecdotes that you could share? Feel free to let us know in the comments!

Get updates to the weekly articles + lots of freebies when you subscribe to the Talk in French newsletter.

Previous Post [QUIZ] Can you guess what these goat-related French expressions mean? Next Post How to Pronounce Difficult Words in French: Part 1