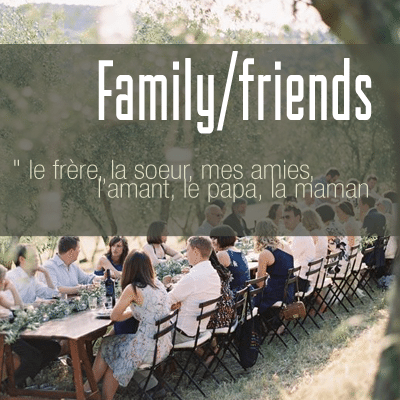 The hip hop American slang “boo” was actually coined from the French word “beau”, which is an adjective placed in front of a male noun.

“Belle” on the other hand helps express the female noun.

Discover below on how to use this together with the usual French words relating to family, relatives and friends.

Get the vocabulary list in PDF format by clicking the yellow button below.

Compound phrases such as la belle-fille and le beau-fils have a double meaning.  They are used to express daughter-in-law and son-in-law. In the following sentences, note that la bru also means daughter-in-law. Similarly le gendre means son-in-law as well.

The adjective grand or grands placed before the nouns mère, père, or parents serves to express grandmother, grandfather, and grandparents.

The adjective petite, petit, or petits placed before the nouns fille, fils, and enfants serves to express granddaughter, grandson, and grandchildren.