There was once a young boy who worked as assistant at a café in Paris. His name was Henri and he was 14 at the time. One day, a special guest came to their café. It was no less than the Prince of Wales himself, the future King Edward VII of England! A prince! In their café! And among his guests was a lovely French girl named Suzette.

The restaurant was abuzz with activity and Henri was tasked to help in preparing dessert. Perhaps it was due to his poor nerves going haywire, or maybe it was sheer dumb luck, but as Henri was working near the chafing dish, the dessert caught fire.

‘All hope is lost’, lamented Henri, ‘there’s no way I could start over again’. But ever the optimist, Henri tasted some of the dessert and it turned out to be the most delightful riot of flavors in his mouth that he has ever tasted.  Summoning all his courage, Henri made his way to serve the dessert to the waiting prince and his companions.

And what do you know, the Prince loved the dessert!  He even suggested that it be named after his female guest Suzette; and so the Crêpe Suzette was born.

The Power of Stories

Science has proven time and again that stories do something to our brain. It engages the entire brain and activates several brain areas that regular learning techniques cannot reach.

So by now, you are probably unlikely to forget how the Crêpe Suzette was accidentally made by Henri. And the next time you’ll come near a crêperie, you’ll be eager to share the story with another friend, igniting the same passages in your brain and making you remember the story all over again.

Imagine using this technique to learn a language like French.

Imagine reading through a story in French, learning new vocabulary along the process, and recalling the tiny details easier.

Do you think your brain would accept the story with open arms and the all French language lessons in it? You bet. Even before the prehistoric artists in Lascaux drew stories on cave walls, human beings have harnessed the power of stories to transfer ideas and knowledge between people.

We can definitely make use of this, too. And it will be a fun and “un-boring” supplement to your French language studies.

As the second installment of the wildly successful Learn French with Stories which I released last year, I am now happy to offer a new version specially created for beginners in French. With a total of 15 short stories centered around a wide variety of themes like family, home, clothes and shopping, nature, weekends, and many others, this beginner version still offers the same features that make the first one a big hit with French learners:

French made incredibly easy and fun

Who says learning French has to be so hard? The stories are in short, manageable chunks – ready to be digested in small doses – making learning fun and totally painless. Whether you are an absolute beginner or someone who needs a refresher in French – this e-book is perfect for you. Click on the banner below to learn more. 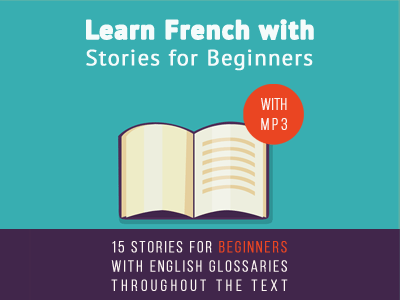