There's that charming sound to the spoken French language that everyone seems to find delightful. How French words seem to melt together to form pleasant sounds--it can be both enchanting and intimidating at the same time.

Whether you are beginning to learn the language or you only need to brush up on the rules, this is the perfect guide for you to refer to every once in a while. 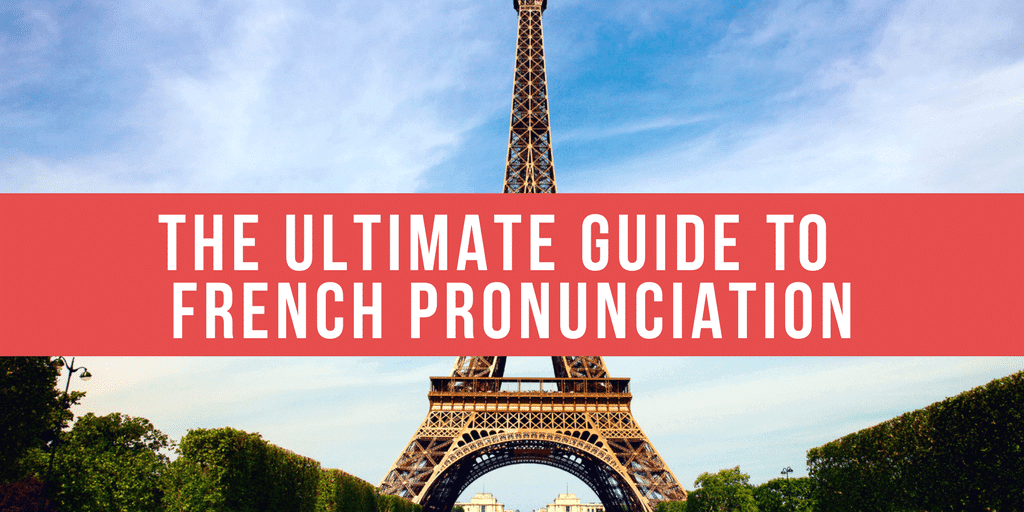 Too busy to go through the whole article now? Simply click on the button below to download the French Learning Package.  You'll find inside the pronunciation guide in PDF format and the audio files to practice your listening and pronunciation, too!

Before we proceed to the meat of the lesson, here's an important tip I would like to share with you.

Don't be too hard on yourself when you can't fully grasp the pronunciation rules after a few hours of practice. It takes time to learn how to pronounce French words properly – months, in fact. Besides, it's extremely rare to see a foreigner with a 100% correct pronunciation.

Besides, does it really matter? France is a hugely multicultural country and the French people are quite familiar (and accepting!) with a wide range of accent. So don't beat yourself to a pulp, and just keep practicing until you start to pull off French pronunciation quite nicely.

Remember, you don't need to memorize these rules by heart, but by just referring to this page every once in a while, you'll get there in no time. So bookmark this page (or download the PDF) and study the guide as often as you'd like. It will be ingrained in your system before you know it.

So are you ready?

1. The Stress (and why you shouldn't stress it out)

When compared to the English language, French pronunciation has a more distinct sound and a flat intonation. The stress is mostly even except for the last syllable which is given a tad bit more of an emphasis.

Check out this example where we will use the word IMPORTANT. Notice the difference in the stress between the two:

2. How to Pronounce French Vowels

For the newbie French learner, the difference between a, à, and â as well as e, é, è, and ê can get head-swimmingly frustrating. But the truth is, it's not actually that complicated at all.

Here's a nifty guide for you to use so you could easily distinguish the pronunciation between the letters and all its mind-boggling accents or diacritical marks (or simply put, those little thingies on top of the letters).

Now we move to the consonants.

3. All About French Consonant Sounds

Consonants in French are basically pronounced the same way as in English. But here are some rules for you to take note of, just to make things a little bit easier.

Here's an important thing for you to note:

Except for these letters: c, f, l, and r, consonants are usually not pronounced when it is the last letter of the word. Take for example the silent last letters in the following words:

On the other hand, l and r are pronounced such as in the following:

Just remember the letters using this mnemonic or memory aid: Clear French Language Recall or CFLR. (See, told you this is easy!)

4. What Are French Nasal Sounds?

Sounds difficult? Not actually. In fact, the English language has three nasal sounds too, namely the m sound, the n sound, and the ng sound. And we are using these to speak flawlessly (or not!) everyday.

Try saying the words sing, sang, song and sung and notice the following:

French has four nasal sounds which are more similar to its English counterparts than we realize.

These are the following:

We mentioned that there are four nasal French sounds but you must be wondering why there are five listed. This is because some French speakers do not make distinctions between um* and im* and both are being pronounced as 'ang' like we do in sang.

Now read up carefully because this here is where non-French speakers often get in trouble. Listed below are some pronunciations for syllables that, when spoken, differ quite well from how it is spoken in English.

6. Those Flowing, Connected Sounds and How It's Done

We are all quite aware that the French language sounds flowing and continuous, or to put it jokingly, like speaking in cursive. This lends itself a lot of charm and that very noticeable melodic sound that foreigners simply love.

To get this delightfully melodious sound in intonation, here's a simple rule for you to remember:

If a word that begins with a vowel or a silent H follows a word which ends in a consonant, the consonant is linked to the beginning of the second word.

2nd word --- begins with a vowel or silent H

Result:  the consonant in the end of the first word is automatically linked to the beginning vowel of the second word.

To illustrate, let us make use of these examples:

nous avons – the 1st word ends with the consonant s while the 2nd word begins with a vowel.

To pronounce it: noo zah-vong (meaning, we have)

un petit enfant – petit ends with a consonant while enfant begins with a vowel.

To pronounce it: ung p'tee tahng-fahng (meaning, a small child)

A few guidelines to remember when using other letter combinations;

See also: 12 Things You Need to Remember about French Liaisons

7. Accent Marks (and the difference it makes)

Just like several other languages, French makes use of accent marks. Accents are a type of diacritic marks which are basically glyphs or small signs attached to a letter. These are commonly used in Latin-derived alphabets as well as non-Latin ones like Chinese, Arabic, Greek, Hebrew, Korean and others.

French makes use of three main accents, and these are:

In addition, there is also the cedilla (ç) or la cédille which can be found only underneath the letter c; and the diaeresis  (ë) or le tréma which is often used to indicate that the second vowel is to be pronounced separately from the first (e.g. naïf—naive and noël --- Christmas).

What are accent marks for?

Here are their uses:

1. They are used to change how a letter sounds.

For the cedilla, remember the rule discussed earlier wherein c is only pronounced as a soft s when placed before an e or i? The cedilla totally changes that.

Take for example the word garçon (which means boy). It precedes an o which means it should be pronounced as a hard c as in 'car', but the cedilla softens the letter to make it sound like s as in 'sit'.

2. Accent marks are used to differentiate between similarly spelled words which have different meanings.

There's something very interesting about the accents though. In modern usage, French accents usually do not appear in capital letters because it is already deemed unnecessary. The Académie Française, however, maintains that it should be used at all times in order to avoid confusion.

8: French and English Similarities in Pronunciation

Contrary to popular belief, there isn't really a huge gaping difference between English and French pronunciation.  In fact, most syllables are pronounced as though they are a part of an English word and are each given an equal stress.

But do take note of the following while reading the examples shown in this guide:

The French Alphabet also contains 26 letters of the ISO basic Latin-script alphabet (or simply, the alphabet as we know it). It is basically similar to that of the English alphabet except for K and W which aren't always used. The pronunciation is also a bit different.

So just in case you are planning to visit France soon, then you might want to practice spelling out your name should the French-speaking receptionist (or other people essential to your travel) require it. Spelling it out in French would make a lot more sense to them than the English phonetics.

Here is the rest of the French alphabet as well as their pronunciation:

Some Videos to Improve your French Pronunciation

Before we end this pronunciation guide, here are a few videos for you to check out. Never mind that some of the pronunciations are not 100% French, the important thing is that you are able to listen and compare it with your recent learnings. Good luck on your journey in learning how to pronounce French words!

You can also check out other related lessons here in the blog:

Q&A: How to Improve French Pronunciation and Sentences

We wish you the best of luck in your French studies and don't forget to keep visiting this site for more useful information! For more information or comments, please don't hesitate to let us know.

Here are some FAQs about French Pronunciation

What is the common pronunciation of the french letter “B”?

The French letter “B” pronunciation is /beh/ like bay in English.

Why is French pronunciation so different from the spelling?

The French language has a lot of silent letters and homophones. This is mainly because of history. The French language emerged from many different dialects of Latin (Italian, Spanish, Greek, and a few others). The spelling was standardized by Renaissance scholars to match the Latin letters to the Old French sounds, that’s why the pronunciation is different from the way it is spelled.