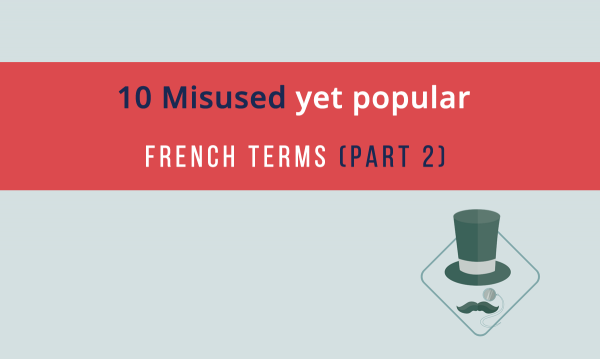 French words and phrases often find their way into English usage, but some of these expressions have only been masquerading as actual French words…

and French speakers may not actually recognize them in the context that the English speakers are using it.

We’re not saying though that these words are incorrect—it’s not—because words are continuously evolving depending on how people use it over time. This series of articles simply aim to:

If some of the words that you think should be on this list, but aren’t, make sure to check out parts 1 and 3 of this series. If they’re still not there, make sure to add it in the comments section below to share with the other readers! 🙂

So let’s get the ball rolling, shall we?

Let’s say someone seems to be flirting with you and sending hints that may or may not be what you’re thinking. Is it just a harmless comment? Or is it a naughty message? You don’t know and it’s messing you up!

Well, what you heard is probably a “double entendre” (or an innuendo), a figure of speech that is used to say two possible meanings at once. Double entendres are usually suggestive or ironic in nature, and may also be used as a display of wit and playfulness or simply some sheer evil mind tricks on hapless victims.

In French, however, the term doesn’t make much sense. “Entendre” is a verb in its infinitive form that means “to hear”. When used as a noun, it would have to be à double entente (literally, ‘with a double hearing’) which means of ‘double interpretation/meaning’. This is a bit old-fashioned, and its acceptable modern usage would be à double sens.

The artist just gave a rousing performance and the crowd is shouting Encore! Encore! In English, the term is being used to mean not only “again!” like its literal meaning, but also refers to requests for additional songs to be played after a gig has already ended.

If you want to request for a repeat performance in French, you don’t say “encore!” but rather, « une autre ! » or ‘another one!’. Or you can also say « bis ! »which means a request to repeat. 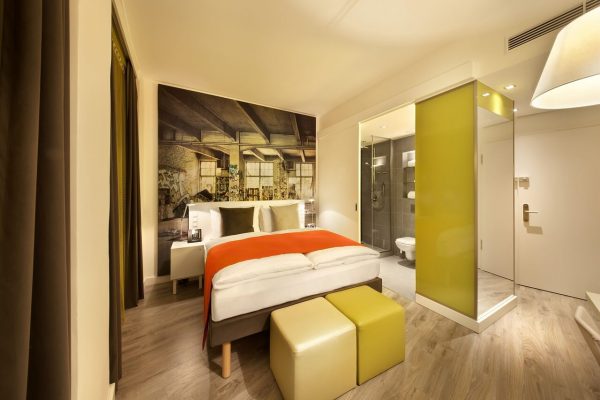 In English usage, when people say “en suite” particularly in the context of bathrooms or similar provisions, it means that those facilities are already attached or connected to the room. This expression commonly appears in hotels or other accommodations to distinguish the add-on private bathroom feature of a room, as compared to other rooms that have communal facilities to be shared with other guests.

This term is not really being used in French, though. There is an « ensuite » word which means “then”, but in this context of in-room facilities, the expression does not exist at all. « Suite » means a set of rooms in a hotel or dwelling, just like how it’s used in English, but « en suite » not so much. 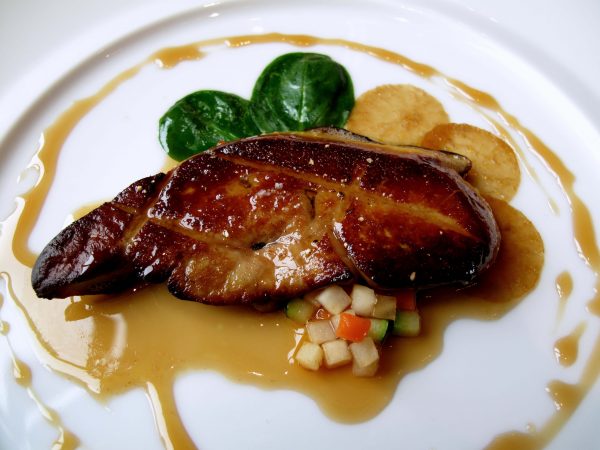 Foie gras is one of the popular entrée in France

This is one of those words that need to be used properly depending on who you’re talking to, to avoid any kind of confusion. If you are with American-English speakers, an entrée means the main dish, or the primary course of a meal. When you’re with French speakers, however, it refers to the starter dish or the appetizer.

Entrée means “entrance” in French, so it is basically the dish that heralds the entrance or start of the meal. The main dish is called plat de résistance in French and it is eaten after the entrée.

In English usage, an exposé is a piece published for the purpose of exposing a scandal, a fraud, or some similar shocking revelations. Its use is not limited to print journalism and also extends to broadcast and all other types of media.

In French, it simply means any report or discussion about any kind of subject, and doesn’t really need to be a jaw-dropping exposition.

Get a copy of the most comprehensive French vocabulary e-book available. 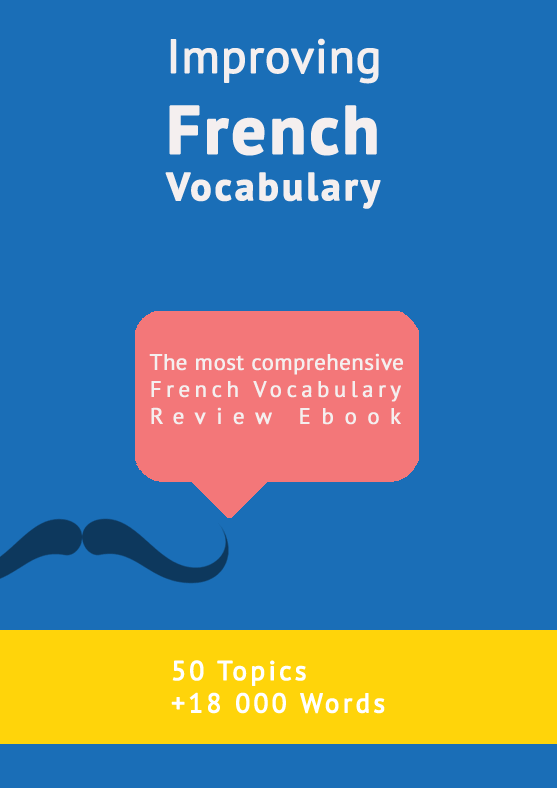 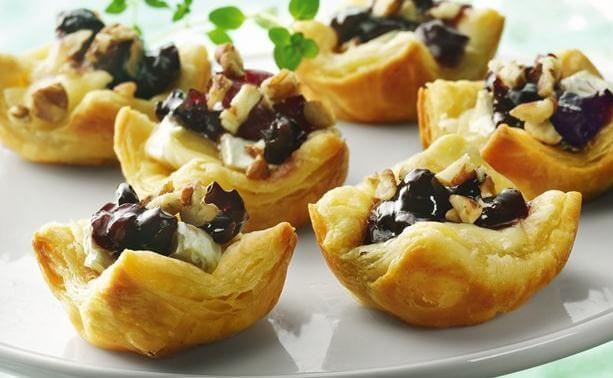 This is another term that can be quite confusing to some. When used in English, it means the snacks that are served with drinks which can be either:

For example, during cocktail events, people would mill around and socialize while being served hors d’oeuvre by servers.

In French the literal meaning of this term is “outside of the work” and it is synonymous to the word entrée (as it is used in French) which is the first course or the starter dish served during meals. The pre-dinner servings of foods and drinks such as mentioned in the English usage of hors d’oeuvre is referred to in French as the apéritif.

This term appears in many formal communications in English, and often comes liberally sprinkled in business conversations. Used in English as another way to say “in place of” or “as a substitute or replacement of”, this phrase is actually a hybrid one and probably evolved from the French term au lieu which can be translated as “instead”.

Léger de main or  legerdemain as it is commonly written is also known as “sleight of hand” and used to mean the tricks performed with the hand during magic tricks or illusionists’ arts. It can also be used to refer to the ability to be cunning or use devious methods to deceive people.

In French, léger de main literally translates to “light of hand”, but the term is basically meaningless as it is not used in any context in the French language. 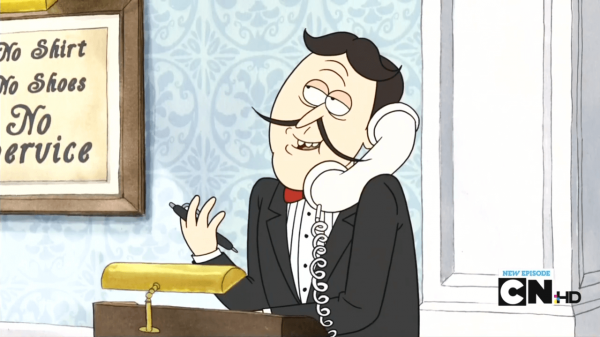 In informal English usage, maître d’hôtel (literally means ‘master of the house’ or the head waiter) is usually just shortened into maître d’. This word has become so common that it is considered already as a word by itself.

When speaking with French people, however, the term maître d’ would seem very weird and confusing because it means just master o’. And they’d be, like, master of what??? 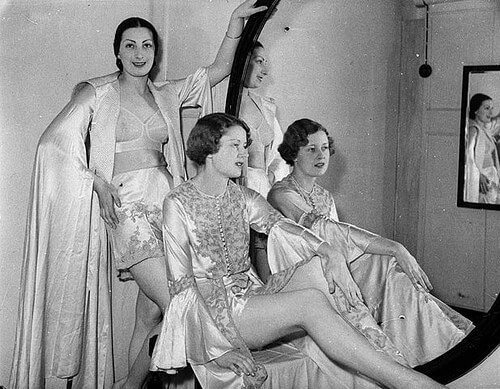 English speakers know of the “negligee” as a light nightgown worn by women. These are usually made of sheer and soft fabrics and sometimes see-through material. The French meaning of the word, however, may not be what people have in mind when using the term. Négligée in French actually refers to a female who neglects her appearance. The correct French counterpart is négligé (in masculine form) or nuisette which means nightie or nightgown.

For more misused French words, check out the 3rd part of this article series and make sure to share this with your friends and family.