9 Ways to Say Hello in French

Do you need to know how best to greet people in French? Look no further. Here you will find nine different ways to say “hello” in various circumstances. 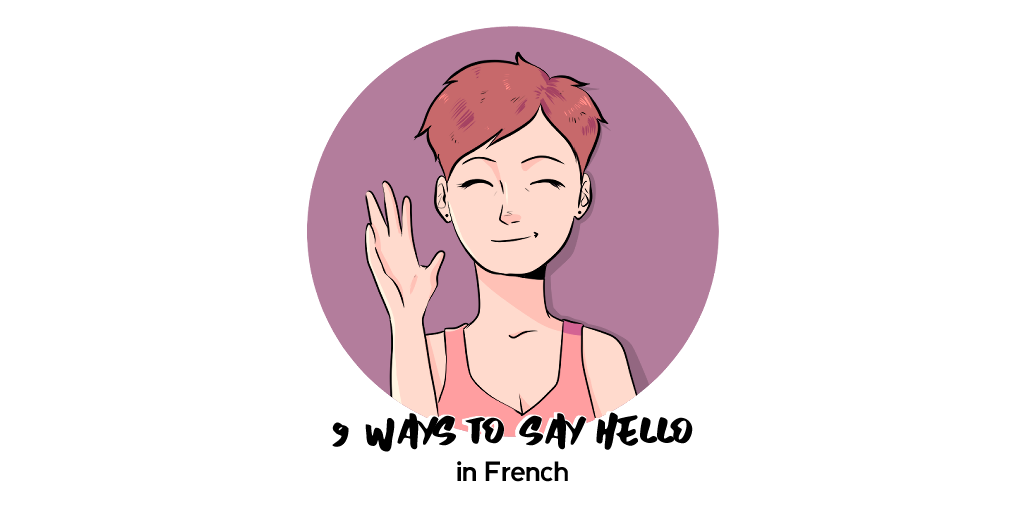 Every language has different ways to say hello, almost too many to enumerate. For example, off the top of your head how many English greetings can you think of?

There are different ways that you say hello depending on who you’re speaking to, the time of day, and how close you are to the person you are greeting. You wouldn’t use the same greeting for your boss as you would for your best friend or a family member, so it makes sense, even if it can get a little confusing sometimes.

For the most part, you will be able to use one universally, like you use “hello” in English. However, if you are looking to sound fluent and natural, then it is important to learn the different ways and appropriate situations to use them.

Bonjour is the most well-known way to say hello in French. Its literal translation is “Good day.” This is the way to say hello that is taught to many students who are learning French in a classroom.

Bonjour is the way to say hello if you are ever in doubt because it is the most common way to greet someone. If you can’t remember any other way or aren’t sure what to use in a certain situation, it is best to stick with bonjour.

The Formal Way to Say Hello in French

In formal situations, use bonjour in conjunction with monsieur and madame.

When addressing multiple people the phrase to use is bonjour mesdames et messieurs.

Unlike with the phrase “good evening,” there isn’t a set time that people will switch between bonjour and bonsoir.

Bonne nuit isn’t actually used in the same way bonsoir is used. Bonne nuit is a way to wish someone “good night” before sleeping. If it is the evening and you are looking for a different greeting to bonjour it is best to use bonsoir which means “good evening”.

Coucou: An Informal Way to Say Hello in French

Coucou isn’t a very common way to say hello in French. It is mainly used when communicating electronically or by children.

This way of saying hello in French is very informal, so would definitely not be something to use in a professional setting. It is best used among friends and family or anyone else close to you.

As coucou is commonly used in emails and texts, there is an abbreviation that you may come across. The “text speak” for coucou is “cc,” so if someone uses this with you in a text message, this is probably what they are saying.

Allô: How to Say Hello in French on the Phone

Using Allô to say hello in French is typically only done when answering the phone. The word is commonly said in the same tone that you would ask a question so that the ending is in a higher voice than the beginning.

Allô can be linked to the English “Hello,” the German “Hallo,” and a few words in Hungarian, all of which could have influenced the use of the word in French.

Salut is probably the most common way of saying hello informally in French. It is another greeting that is taught in French lessons at school, so most people who have studied the language will be familiar with it.

Salut is not a way that you would greet strangers either, while it is used in informal settings, it is mainly said to people you know. This can include any acquaintances, though, not just friends and family.

There is also a verb that is related to salut: saluer, which means “to salute,” “to pay tribute to,” or “to send your regards.”

If you are texting with someone, you may encounter the abbreviated version “slt” instead of the whole word salut.

While Ça va is not a way to say hello, it can be used to greet someone, in the same way that some people say “How’s it going?” when they see someone. It is far more common to hear the question Ça va? following either bonjour or salut because it is used to ask how someone is doing.

It means the same thing as comment ça va? so it is possible that you will hear that phrase instead during conversations.

Quoi de neuf? is similar to ça va? in the way that it isn’t specifically a phrase to say hello, but means “What’s up?” or “What’s new?” This phrase is commonly swapped out for “Quoi de beau?” which means “What’s beautiful?” instead, but conveys the same sentiment when greeting people in French.

Quoi de neuf? is most commonly used after someone has already said hello in a different way such as bonjour or salut.

Now, this way of saying hello in French isn’t verbal. Faire la bise is used to refer to greeting someone by giving them a kiss on either cheek.

Using this method to greet people can vary depending on where you are in France because different regions have different practices regarding the number of kisses and which genders greet each other in this way.

You’ll also be happy to know that this isn’t a greeting that you would give a complete stranger; it is only used for saying hello to people that you already know.

Foreign Words That Have Influenced How to Say Hello in French

In a similar way to how allô can be linked to words in English, German, and Hungarian, there are a few ways to say hello in French that have come from abroad. Most are used by French teens and young adults, although “hello” is common amongst older generations as well.

If you are looking to use slang while speaking French, you could potentially use yo (from American rap), wesh (from Arabic meaning “hiya” or “hey”), or kikou, which is a variation of coucou that is rarely used, but you can say it in an ironic way.

The examples listed above aren’t the only ways that one can say hello in French; there are several others that you may hear or know. It is important that you consider which way of saying hello is appropriate to the situation that you are in; otherwise, it could become rather awkward.

If you are just beginning to speak French, it might be a good idea to familiarise yourself with the basic French greetings.

Also, now that you know how to say hello, it’s time to learn how to say goodbye in French so that you don’t fumble at the tail end of your conversations.
Previous Article
Next Article