When someone says “thank you” to you in French, how are you supposed to respond? Unsure how? Don’t worry, below are seven ways to say, “you’re welcome” in French, which can be used in different locations and situations. 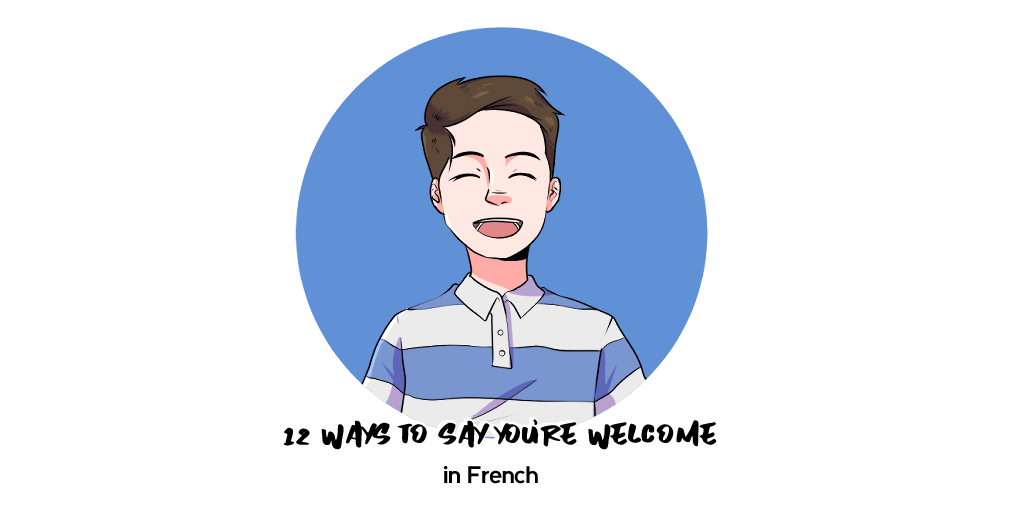 The Many Ways to Say You’re Welcome

As with every language there are different ways to say you’re welcome in French, some more common than others, but all mean the same thing.

The different ways to say “you’re welcome” in French are used in different circumstances.Some suit formal, work-related situations (like je vous en prie) better than others, which are used in colloquial, informal settings (such as de rien).

The variations of “you’re welcome” in French are specific to your location in France, so it is a good idea to learn them if that is where you are visiting and you want to sound fluent. It’s always important to be prepared whenever you visit a new place.

De Rien: The Most Common Way to Say You’re Welcome in French

The most well-known and probably well used way to say “you’re welcome” in French is de rien. If you are ever doubting which version of “You’re Welcome” to use, then it is best to stick with this one as it can be used for most situations.

The closest English translation of de rien is probably when you say “It’s nothing” in response to someone thanking you. This is because the literal translation is “from nothing”.

De rien didn’t start out as just two words, it was in fact part of a longer phrase to begin with but was shortened for ease. The original phrase was actually, ne me remerciez de rien, meaning “don’t thank me for anything”.

In formal situations, it is always best to use je vous en prie when saying “you’re welcome”.  This is because vous is the formal “you” in French and is generally reserved for when you are talking to those you wish to show more respect.

This phrase is commonly heard in cities like Paris, because it is the politest way to say “you’re welcome”.

The phrase literally translates to “I pray you for it”, as prie is a version of the French verb for “to pray”. There are several loose translations that apply it to “you’re welcome” such as, “I implore of you not to thank me” and “I beg you not to thank me”.

The next way to say “you’re welcome” is Je t’en prie is the informal version of Je vous en prie.

It is informal because of the use of tu instead of vous, as this variation is more commonly used when speaking to people you know such as family and friends. More information on the different uses of tu and vous can be found here.

While it is considered slightly more formal than saying de rien because of its links to the above phrase, je t’en prie is still not the way to say “you’re welcome” if you are in a formal French setting.

Pas de Problème is probably the method of saying “you’re welcome” in French that beginners will find easiest to remember because of how similar it is to its English equivalent. Pas de problème is the literal translation of“no problem”. You may also hear it said as Il n’y pas de problème, which means “there’s no problem”.

This phrase isn’t used very often, only  when someone is doing someone else a favour. So, if you had helped someone do something and they thanked you, this would be the way to say, “you’re welcome”.

It is also mainly used in informal situations, so not something that would be used in formal settings.

If you are staying in or visiting the South of France, there is a different way to say “you’re welcome” that is used. This is common with vocabulary as different regions will say things slightly differently.

Using dialects specific to the region that you are staying in will help you sound more like a local, communicate easily, and fit in with the other people. It is a good idea to learn some of this vocabulary, especially if you ever go explore the other regions of France.

Avec plaisir literally means “with pleasure”, it is used in a similar way to how in English you would say “my pleasure” when being thanked for helping someone. It is another phrase which will be easy to remember for French beginners.

This method of saying “you’re welcome” isn’t commonly used in French but is handy to know should you need to use it.

C’est moi qui vous remercie is another way in which you can formally say “you’re welcome” in French. It is literally translated as “It is I who thanks you” meaning that it is typically said when you feel that it should be you saying “thank you” instead of being thanked.

The phrase can be shortened to c’est moi. The shortened phrase is taken to be slightly less formal and is more commonly used in conversation as it is easier to say.

It is easy to tell which previous way of saying “you’re welcome” this French phrase is associated with. Ce n’est rien is simply another way of saying de rien, and means “this is nothing”.

Merci à vous literally translates to “thanks to you”, so it’s use is similar to how you would use C’est moi when you are replying to be thanked and feel as though it should be the other way around.

Bienvenue: The Way to Say You’re Welcome in Québecois

Now, this way of saying “you’re welcome” in French is similar to avec plaisir but it is used in a different French-speaking area. If you’ve been to Quebec, Canada or planning to visit there, bienvenue is used to say “you’re welcome”.

In France, bienvenue means welcome and is usually used to welcome someone somewhere, like your house. But in Québec, it is used to say “you’re welcome”, which can be confusing for those learning to speak French.

This way of saying “you’re welcome” is used in the French-speaking part of Belgium and may be slightly confusing to the beginners of the French language. This is because when speaking in France s’il vous plaît means “thank you”, but in this circumstance it is how you would respond to being thanked in Belgium.

À votre service is the way that you would say “you’re welcome” if you are ever in the French-speaking part of Switzerland. It literally translates to “at your service”.

This phrase is similar to bienvenue and s’il vous plaît because it is a French phrase that wouldn’t actually be used to say “you’re welcome” in France.

It is common knowledge that saying “you’re welcome” should come after receiving a “thank you”. It is only polite after all! It can be confusing sometimes when you are trying to work out which phrase to use for which situation, but it is a lot easier than it seems once you have spent more time learning.

If you have any further concerns on how to continue being polite in conversations, or simply want to make sure that you don’t offend anyone, we have a guide on French politeness and niceties that will help you!

Another article that may help you learn how to speak French is our article on small talk, which will help you to look at other common phrases that may come up within your conversations.

And if you want to practice holding conversations with others in further detail, we have a course available to help you do so.