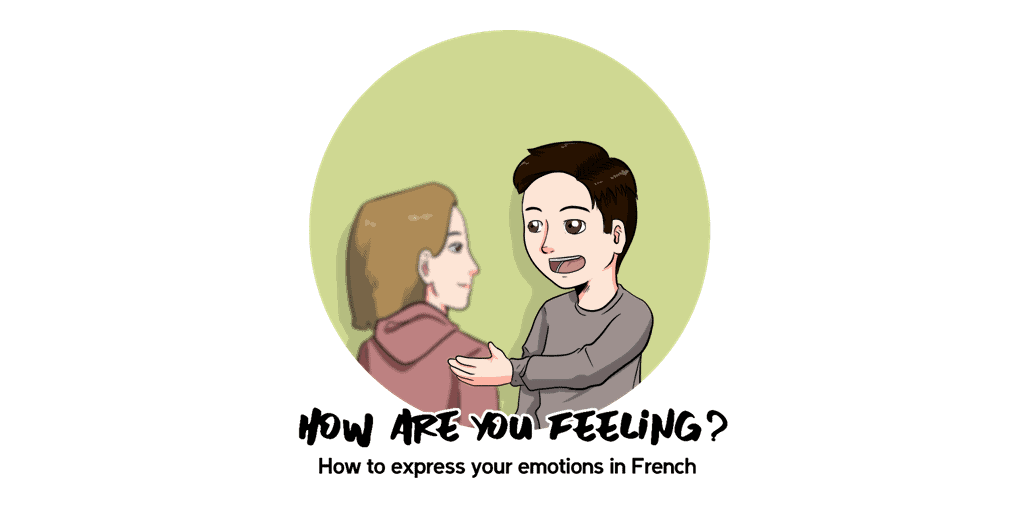 When someone greets you in any language, it’s almost impossible not to follow up with the question about how you’re feeling. It may be a bit awkward if you become silent after someone greets you with “Bonjour,” so it’s best to study up on letting people know how you feel.

There are several ways to express your feelings and emotions in French, so we’ll cover the basics.

Asking and Telling How You Feel in French

There are a few ways to ask someone how they’re feeling, but it’s important to keep in mind whether you’re speaking to someone formally or informally.

The most common phrases are as follows.

"How are you?" in French

The informal form is preferred when talking to friends, family, and peers. Use the formal form when communicating with strangers, your superiors, or elders.

In response, you can say:

*Keep in mind that when referring to more than one person, you will change the verb est to sont to agree with the subject.

To talk about your feelings, or les sentiments, in French, you will frequently use the verb: se sentir. The verb has various forms to agree with the person using it and how many people you’re referring to.

To explicitly ask about someone’s feelings, you can ask, “How do you feel (informal)” or “How are you feeling (formal). In french, you can use the following phrases:

"How do you feel?" in French

In response, you will use the same verb as follows:

Être de bonne humeur (To be in a good mood)

On our best days, we’ll be able to happily respond to the question in bonne humeur, or a good mood. Whether it’s the case or not, when speaking to strangers, we tend to respond the same way to avoid any further questions or explanations.

There are lots of ways to express your good mood and to varying degrees of happiness.

Some of the most common ways to describe a good feeling are:

For example, you can say “Je suis content” for “I am happy,” or “Elle se sent gaie,” for she feels cheerful.

The critical thing to note when speaking and writing French is to use the correct adjective with the corresponding subject so that the person you’re speaking to knows exactly who you’re talking about!

For example, some of the phrases you might say are:

Ideally, you’d be using these phrases for most of the time you’re communicating in French – perhaps while traveling in France. Once you understand the overall sentence structure of talking about how you feel and your emotions, you can apply most adjectives to the end as you continue to grow your French vocabulary.

Être de mauvaise humeur (To be in a bad mood)

As much as we’d like to be, it’s hard to remain in a good mood forever. There’s always certain circumstances that happen in our life or just “one of those days” when we’re feeling a bit down.

Just as there are several ways to express your good mood, there are just as many ways to talk about being in a bad mood, or mauvaise humeur:

Some of the phrases you’d use for communicating you, or someone else, is in a bad mood are:

Sometimes, our bad mood can show in our appearance even without having to communicate it verbally. If someone notices you look a bit down, they may ask you, “Qu’est-ce qu’il y a,” or “what’s wrong?”

Our bad mood can be attributed to events, or daily situations that may have us down temporarily or for the entire day. Some of the more abstract bad mood words to describe how you feel include:

Let’s take a look at a few phrases to put them in the context of how you’d use them in a sentence:

Some of the words used to describe a bad mood can be interchanged if the emotions and feelings are closely related. For example, “énervé” can be used to express a feeling of annoyed, bored, or irritated. Also, “confus” can describe either embarrassed or confused.

Understanding the context and nonverbal cues can let you know exactly which emotion someone is trying to communicate.

To wrap up, here is a list of French emotions vocabulary.

30 French vocabulary words and phrases for describing feelings and emotions

How about you? How are you feeling? Let us know in the comments below how you’re feeling today!

Previous Post 15 Ways to Say “How are you?” In French Next Post 7 Paris Parks You Should Definitely Visit Soon