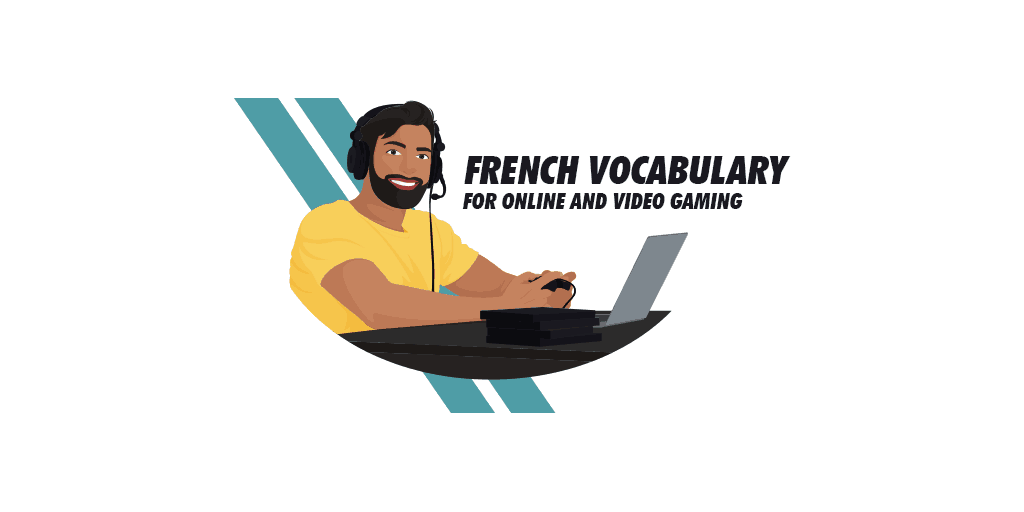 Gaming is one of the most popular trends around the world! With today's online gameplay capabilities, it's even possible that you're competing with someone outside of your country.

Did you know that gaming is an excellent opportunity for you to improve your language learning skills? There are tons of French vocabulary for online and video gaming.

Whether you're connecting with players via the PC or enjoying a solo mission game on your favorite console, there's lots of French to learn.

Check out these 25 French words and phrases that you're sure to hear during gameplay. We've even compiled the list before for you to refer to during a heated game quickly.

Before jumping into your favorite game, let's have a look at some of the beginning j'ai besoin de vocabulaire, or video game vocabulary to get you started.

As you go through the list, you will notice a lot of similarities between English and French counterparts. When it comes to gaming, a lot of words, especially slang, were adapted from English.

Most players online speak English, but it doesn't mean you can't surprise your gaming pals in France with a bit of local jargon.

Whether you're waiting for the upcoming lancement a Minuit, or midnight release, or already have your favorite game loaded up, its time to jump into the expérience de jeu (gameplay).

You might not be ready to jump online and interact with other players during your "kikou" or noob phase. If you're brave enough, however, your casque, or headset, is perfect for plotting out gameplay strategies or dropping your new French lingo.

Consider selecting French as your gameplay language. For games that you're already familiar with, it will help with understanding the translations.

Some games have a lot of dialogue, and seeing the text in French is also beneficial to learn the language while having fun.

Now the fun begins! The basics for all gamers is understanding the difference between your player and the PNJ, or personnage non-joueur (NPC, or non-player character).

You'll want to give your player a unique look during the conception du personnage, or character design stage, that sets them apart from the other characters. Consider a style that matches how you look in real life!

Once your character spawns into the game, or réapparaître, you'll be ready to test out your hand-eye coordination. Everyone is a kikou in the beginning, so don't worry. You have the entire game to learn how to level up, or prendre un niveau. We all get a boost of adrenaline with every accomplissement, or achievement, that out character obtains.

One of the most important things to do during gaming is to save, or sauvegarder, to ensure you don't lose your data. You should also sauvegarder this new French vocabulary to understand when the words appear on the screen when prompted to do so.

Congratulations! You've reached un point de sauvegarder, or checkpoint, in your game and French vocabulary. Just another accomplissement to add to your stats.

That's a lot of French for just learning the basics of gameplay. Feel free to take a snack break during the cinémathique, or cut scene, which is always dramatic for the storyline to get you excited for the next stages.

You can apply much of the French vocabulary that we've already covered to a variety of games. We've even got you covered for some of the more unique terms that you may come across in either online or video gaming.

Video games keep us anticipating what will happen next. Thankfully, many games have creative developers that add hidden features to the gameplay. Referred to as Easter eggs, or secrets  (we also say easter eggs in French), you'll need to do specific tasks or missions to unlock them. You'll be glad you did!

Most games are highly competitive, whether with the computer or other players. Every time you win a match or beat a game, be sure to cheer out: "La victoire est à nous," or "we are victorious." Your French-speaking gaming partners are sure to rejoice alongside you.

One of the darker sides of gaming is cheating. True gamers have all suffered the shame of a blowout or seemingly unfair situations. Maybe it's because of the other player's skill level —- but we always jump to the conclusion of triche and un dysfonctionnement, or 'cheat' and 'glitch,' respectively.

Gamers come in all ages, genders, and nationalities. We each have our preferences when it comes to the types of games that we like to play. You can use our beginner list of French vocabulary words to help with various kinds of game types.

A lot of joy in gaming comes from interacting with other players, either online or in the gaming chair adjacent to you. These games are called multi-plateforme, or multiplayer. Playing online gives you the advantage of having the entire screen to yourself for gameplay; some games allow for split-screen modes, or écran partagé, for enjoying with friends on the same TV or computer screen.

Another popular style of game is a jeu de combat, or fighting game. The phrase can apply for shooters, combat, and other related games. Brace yourself for a lot of shouting and exclamations with these games.

Impress your teammates with your French vocabulary by using words such as 'aggro (attack)' or 'maniement à deux mains (dual wield).'

More strategic games allow you to explore an open world, or monde ouvert, filled with seemingly endless fun and missions to keep you entertained for hours at a time.

For a more immersive gaming experience, test out one of the latest réalité virtuelle, or virtual reality games.

Just as if you're playing a démo, or demo game, we were sure to give you just enough French words and phrases to spark your interest in learning more!

Check out the entire list below for all of the words mentioned and their English translations. And be sure to check out some of the other beginner lists for French vocabulary you're sure to use every day!

What do you think about this list? What French gaming vocabulary did we miss? Share it with us in the comments!

Previous Post French Easter Traditions: How to Celebrate Easter in France Next Post A Guide to the Different Kinds of Dining Establishments in France