Many French films have achieved cult status for one reason or another, but some also made history because they launched timeless trends and style icons. 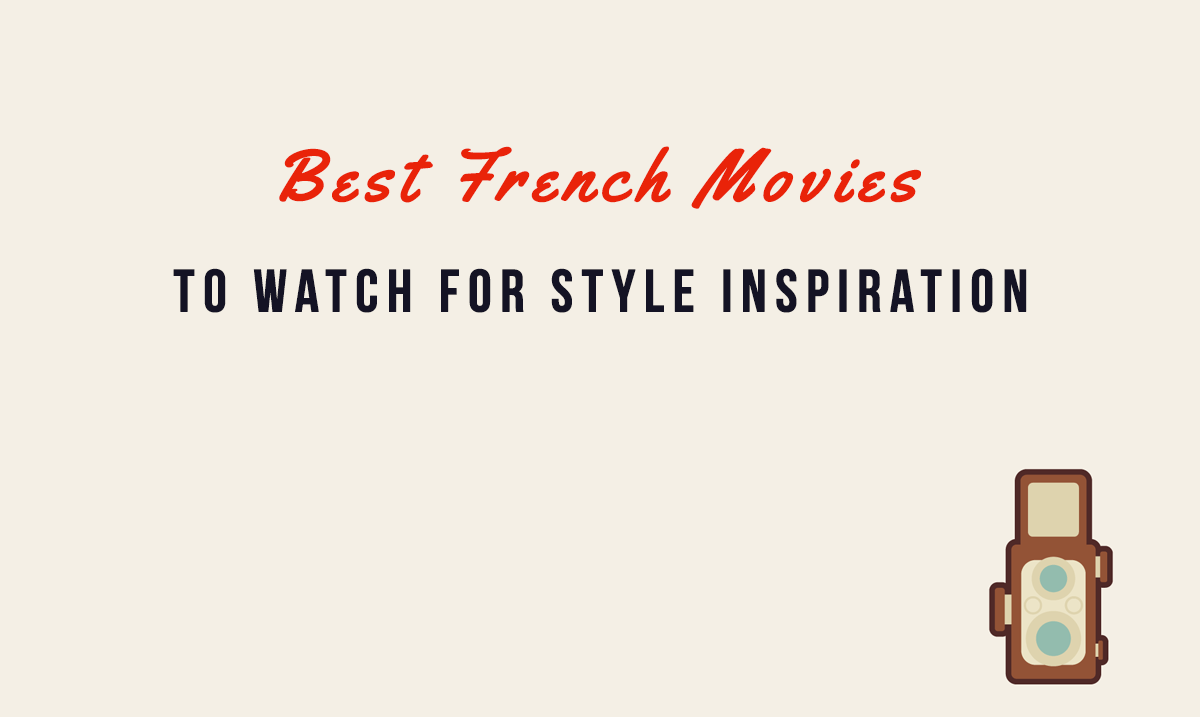 Let's do a tour of French cinema, with movies from the Nouvelle Vague and take serious lessons in style with iconic designers like Yves Saint Laurent, Pierre Cardin or Coco Chanel! 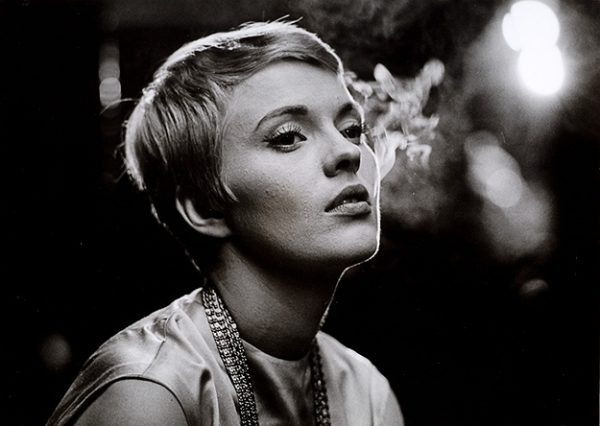 It's about a criminal (Jean-Paul Belmondo) on the run who gets with an American girl who sells newspapers for a living. As it's typical of the French Nouvelle Vague, there were no costume designer or official costumes for the movie. Jean-Luc Godard encouraged actors to wear clothes from their own wardrobe, and dress appropriately for each character.

The title of the movie is a pun in French: a "Belle de jour" is both a flower that only blooms during the day and a "Belle de nuit" is an argot term for a prostitute. Catherine Deneuve's wardrobe in this film is the epitome of the chic bourgeois sixties-prim look: her figure-hugging pencil skirts, silk blouses and stiletto heels will never go out of style. 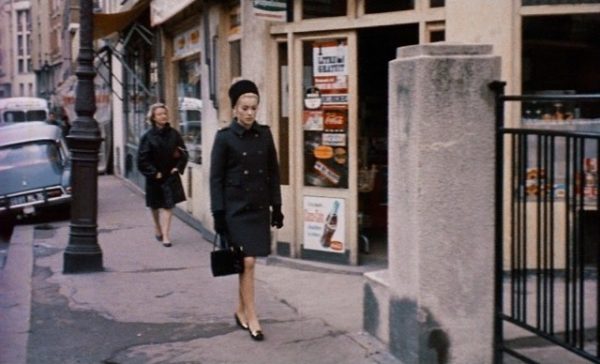 The designer Yves Saint Laurent convinced Deneuve not to wear mini-skirts at a time when they were in fashion. In this film about a sexually-frustrated housewife who turns to prostitution for satisfaction, there is a catch: the garments had to be sewn on the character to fit her perfectly...
It's also the film that sparked a lifelong friendship between the designer Yves Saint Laurent and the actress: she insisted on wearing his design in her future films. That's why you can watch any of Deneuve's films, she will always evoke an eternal femininity through the timelessness of her classic looks. A true French style icon!

This first adaptation of the novel The Talented Mr. Ripley by Patricia Highsmith stars Alain Delon in his first major film. This psychological thriller by the "French Hitchcock" displays Alain Delon's nautical and preppy style, with both cool and put-together summer blazers, rolled-up sleeves and sockless loafers.

The cinematography by Henri Decaë sets the scenes in Rome, Naples and other islands in the vicinity to get that sense of holiday, carefree style that would leave you blind-sighted if you stay in the sun too long. It features a magnetic anti-hero, handsome with a nonchalant sense of style: nobody embodied French style in the sixties like Alain Delon in this film.

To shoot the scene following Philippe's murder, director René Clément even left the actor to steer a boat by himself in the storm, to make his struggle more realistic!

The movie that launched Brigitte Bardot's career, in which she became the epitome of the Femme Fatale. The BB phenomenon was helped by the amazing designs by the French couturier Pierre Balmain.

Much like Bardot in real life, her character is an uninhibited young woman, sensual and fiercely independent, who shocks the small fishing village of Saint Tropez. Saint Tropez became a favorite jet set destination and BB became an international sex symbol--the European Marilyn Monroe. With her iconic choucroute (the ruffled and back-combed hair style, typical of the sixties and still imitated today), heavy eye-liner, and innocent yet sexy look, the Bardot myth was born.
Cheeky French people would tell you that she was the most beautiful when she was not wearing any clothes…. Let's not forget that the iconic scene where she dances dances provocatively in a split skirt, led to the Catholic League of Decency to condemn the film! Scandale!

This movie about a gambling addict, Jackie (played by Jeanne Moreau) is shot along the coast of Côte d'Azur. The "Bay of Angels" is the stretch of coast going from Nice to Antibes : those casinos and bistrots chics are the perfect background for this stylish movie.
The director said he wanted to "lay bare the working of a passion", in all its destructive splendor. Jacques Demy shot in black and white, in order to highlight the gorgeous costumes designed by the French designer Pierre Cardin. Floral print, low V-back dress, accessorized with a feather boa, a black hat with a white scarf; the classic petite robe noire or the timeless tailored suit are real timeless must-haves!

Coco Chanel herself designed the costumes for this film (she also did the costumes for La bête humaine in 1938). This film is the most characteristic of the classic Chanel, both comfortable and free, still incredibly modern today.

This comedy of manners depicts members of the upper-class, that's why you'll find hunting costumes with skirts with pockets, leather gloves, hunting jackets, and scarf tucked into the jacket collar. That British country menswear inspiration will also inspire Chanel for her iconic blazers, tweeds and coats.

Even if her style ideas are still relevant today, did you know that this classic film, considered as one of the best films ever made, wasn't welcomed well by the public at the time, and was ultimately banned by the French government as demoralizing and unpatriotic?

In Otto Preminger's golden-age film, based on the best-seller by Françoise Sagan, Jean Seberg plays Cécile, the rebellious daughter of a rich playboy Raymond (David Niven).

While on holiday on the French Riviera, her playful and carefree existence is threatened by her father's plans to marry his late wife's best friend. She wants to draw the new wife away, but things take an unexpected turn...
This film was made famous for its iconic petite robe noire, and it's no wonder: it was designed by Hubert de Givenchy himself, whereas the little black dress worn by Audrey Hepburn in Sabrina was made by Edith Head after a Givenchy sketch.

Its flawless sophistication matches the elegance of a man's tuxedos: the more formal parts of the costumes were designed by Givenchy, and the rest by Hope Bryce.

François Truffaut wanted to depict a love story between a woman and two men at the same time: the iconic ménage à trois while also being very avant-garde with a Nouvelle Vague Film. So like in other films of that period, the heroine Catherine's costumes were actually Jeanne Moreau's wardrobe.

Catherine depicts a new sort of femme fatale: when she cross-dresses and disguises herself as Thomas, with men's clothes and mustache. It was truly the tomboy fashion or garçon manqué style that became iconic. So many young women at the time dreamt of wearing a wide headband, cheeky newsboy cap, pixie cuts and oversized pullovers.

Everything about her style was copied time and time again: marinière tops, stripes of every kind on sweaters and effortless style really give that chic dandy look that comes to mind when we think about the French woman. It's the feminine-masculine ambiguity that's still fascinating today.

The fashion style of the Nouvelle Vague are revisited by fashion designers time and time again. Like in Breathless, the actors were wearing their own clothes because the directors were obsessed with the realistic feel to give to their films and therefore were not interested in fashion.

She's the one who gives that very particular look to the movie, with her feline eyes, Louise Brooks hair style, knee-length skirts, boucle coat and kitten heels. Anna Karina was Godard's muse and wife at the time. It's actually the nonchalant attitude of the actresses...and chain-smoking that forged the iconic Parisian style of the sixties. 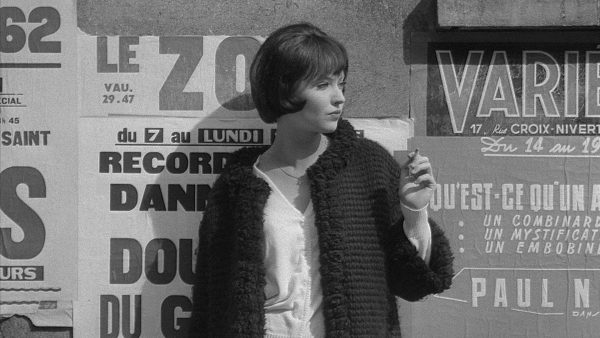 What they lacked in fashion, they made up for in style! Did you know that it's actually a chance meeting with Coco Chanel that made her change her name from Hanne Karin Bayer to Anna Karina?

It's actually Coco Chanel who designed the costumes in the all time classic film Last Year at Marienbad, although she's not credited in the film.The baroque and epic decors match so well the elegance and sophistication of Chanel wardrobe, with a mixture of the twenties and the sixties fashion.

As a result, there has to be a few little black dresses, but also a Chanel metallic suit with three-quarter sleeves and shimmering outfits as well. Alain Resnais was inspired by the style of some silent movies, like Pabst’s Pandora’s Box (1929) starring Louise Brooks. He even requested the entire team to watch the movie, and the hairstylist has to more or less copy Louise's style for the female character.
But Delphine had already cut her hair unknowingly, and what they came up with gave the famous "Marienbad hairstyle", which was copied by women all over Europe and America! For sure, the fashion and cinematography continue to be a reference to photographers, designers and filmmakers today!

Between the all-time classics, the adaptations of great novels or films that launched iconic French actors, this top 10 is of course incomplete but it's a great start to transform your wardrobe into that of a French style icon!

If you are craving more lessons in style, watch more movies with actors like Alain Delon (like The Samurai) or Catherine Deneuve (like Mississippi Mermaid), and other Nouvelle Vague films by Jean-Luc Godard or François Truffault. They are guaranteed to make your style sense tingling. Happy watching!