How to be a French poser with your date 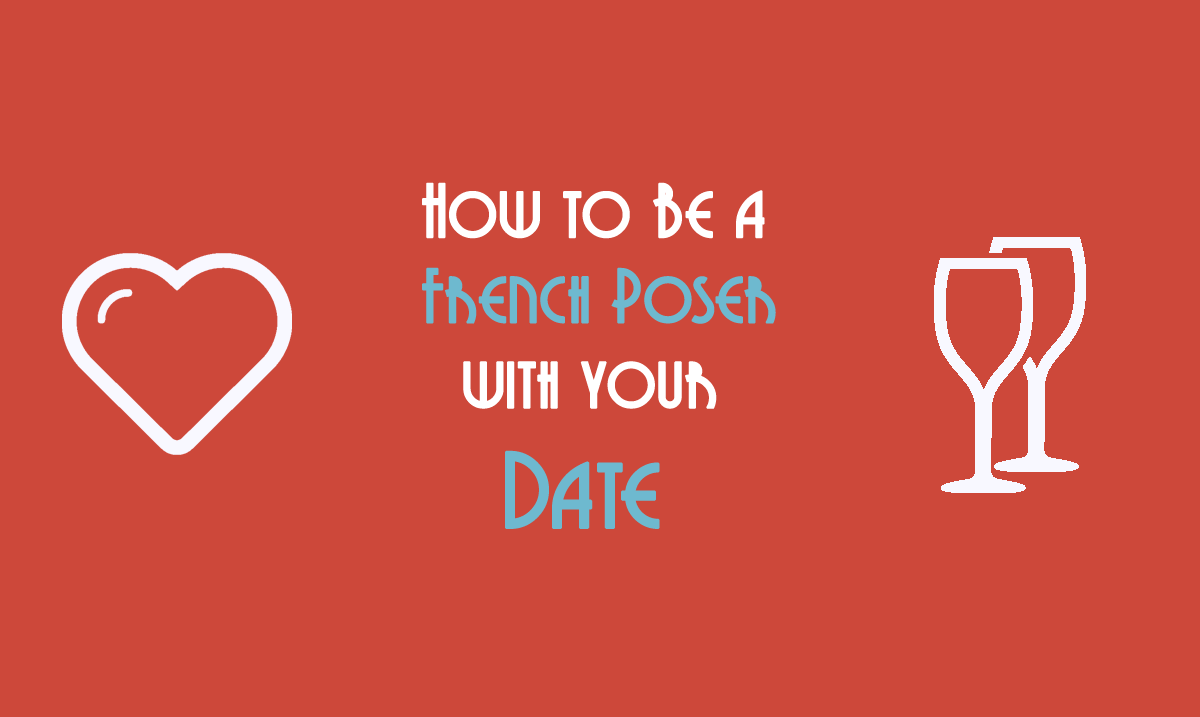 So you have chosen to hold your first date with someone you really like in a French cafe (à l’américaine) and now you want to make sure that the date goes well. First up, you should be congratulated for making a wise choice. You can almost never go wrong with a date in a French café, as such places have long been helping starry-eyed lovers who just lack the game.

The key to a successful date in a French café, especially for those who know squat about French culture, is to work with the ambiance and then fake your way through the date. One simple, yet effective way to do it would be to talk about a particular French song or music style.

About 95 percent of the time, French cafés play French songs in their establishments. Classic French music and songs are standard in these places because it helps with the ambiance. For the entirety of your date, the songs and music will likely be playing in the background and you can initiate interesting conversations about it.

Now you need not try to become familiar with all the French classics. Cafés will very likely play the most common French hits. Some of the favorites have such a rich story to tell that you’ll spend quite a bit of time talking about them and thereby lessen your chances of committing a faux pas during the date. These songs, especially the ones cited here, are distinctive and are easily recognizable.

Some may disagree with the selection of songs below, but keep in mind that the songs are meant for those who need help with their game while on a date in a French cafe.

You can earn the ire of Francophiles by simply not knowing this song or its famous singer Edith Piaf. The singer of this iconic French song is so popular that a French production movie was recently made about her. To know more about Edith Piaf, all you need to do is to watch the movie on Netflix and you are all set to impress your date.

Why you need to watch a 2-hour long movie: Even if this sort of movie is not your thing, the time and effort you spent watching it may turn out to be well worth it, depending on how lucky you can get on your date night.

This is another iconic French song by Edith Piaf. Francophiles like to think that this song is very descriptive of the life of and the philosophy taken on by its singer.  You on the other hand, can pretend to beg to differ with a sound argument gleaned from watching the movie, La Vie en Rose.

Additional trivia: This song was performed in a sequence by Captain Chantal DuBois, the villain in the Madagascar 3 movie.

Chances are that you have heard the English version of this song, “Somethin’ Stupid.” It is also likely that the version you heard was the one performed by Robbie Williams and Nicole Kidman. The French version performed by SachaDistel and Johanna Shimkus presents a few interesting trivia points you can talk about. The singers too, have quite interesting stories to tell. Even if you run out of things to talk about in the French version, you can always go ahead and jump to the recent Hollywood movie version of it and go from there.

How this song can help your game: With a song this familiar, you have a better chance of having a more comfortable conversation with your date.

Just like the previous entry on this list, you may have also heard “Autumn Leaves,” the English version of this song. Whether it was sung by Frank Sinatra or by Nat King Cole, the singer of the original French version, Yves Montand, trumps them like a boss. Montand was an Italian born singer and actor. The guy lived a very colorful and interesting life, which gives you plenty of things to talk about.

What is interesting about the song: Not too many people know that Les Feuilles Mortes, or Autumn Leaves, is a French original with music composed by Joseph Kosma and lyrics by French poet Jacques Prevert.

You may not hear this song played in trendy cafes around Pigalle, but it has become a favorite in French cafes around the world. While the song isn’t entirely French, it does have musical elements that are common in most classic French songs like the accordion playing, the saxophone stylings, and even the female lead vocal appears to be emulating the singing style of Edith Piaf.

Knowing your not-so-French: Chanson D’ Amour is performed by an American mixed music singing group, the Manhattan Transfer, and it made this list owing to its simplicity and ease of recall.

It can be argued that this song sung by Eddy De Clerq & Friends, is neither a classic nor is indicative of French music. However, it can still prove useful for you during your date. The sound of this song is more like a fusion of jazz and samba, but this quirk will make it easier for you to recognize it. Les Monstres Sacres became a favorite in cafes because it essentially gives a run down of the most influential characters in French culture, particularly in the fields of fashion, art, and music.

Brush up a little on French culture: Apart from making for a good topic for conversation, this song can also serve as your cheat sheet about the French culture, which is why it made this list.

The highlight of this song is the vocals of Jane Birkin, which sound like she is being treated to the most awesome foot massage in the world. If you happen to understand the lyrics however, you may suspect that it wasn’t a foot massage she was having at all. Written, composed, and co-performed in 1969 by Serge Gainsbourg with his girlfriend Brigitte Bardot, who herself was then married; the song was released later with Jane Birkin (yet another lover of Gainsbourg) singing the parts meant for Bardot. Je T’ Aime… has such a rich backstory that your conversation about it can last your entire date.

Insert your pathetic attempt to seduce your date here: Personalities behind the song like Gainsbourg, Brigitte Bardot, and Jane Birkin can make for a sexy conversation so you may be able to whet the appetite of your date in more ways than one.

Other suggested songs that you should listen to and do a prep read on are those performed by Petula Clark, Jacques Brel, Michel LeGrand, Brigitte Bardot, and Nina Simone. Google information about the songs and their singers, and that should be enough for you to remember interesting facts about them. Save the songs on your playlist and listen to them several times over to commit them to your memory in time for your date.

It is important to note that when one of the songs starts to play in the cafe that you don’t come off as some pretentious and smug know-it-all. Try to be nonchalant about it and pause from time to time to see how your date reacts. When your date shows interest, then you can work on your game and feed her more interesting information about the song or the singer.

As a final thought, you may get a little carried away while on your date and try to sing a line or two from the song. This, however, can be dangerous as you run the risk of mispronouncing the lyrics. To illustrate, you may want to sing, “I’d like to give you a kiss,” but instead say something weird or even offensive..So for your sake, leave the speaking and singing in French for later. Just talk about the songs.