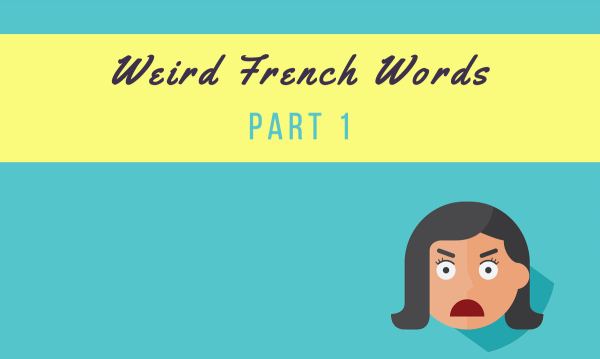 Every language has its own share of weird words. French is not exempt from this.

Here in this article, we listed down words that we think are quite weird due to either:

Can you think of even more weird French words? If what you have in mind is not included here, make sure to check the 2nd Part and the 3rd Part of this article series. Feel free to leave a comment, too!

So, let’s get the ball rolling, shall we?

Why the French has decided to come up with a single word for a one-eyed person, no one can truly tell. But “borgne” has figured in a couple of French proverbs such as:

This proverb means something along the lines of “being a sage among fools” or when in a group of inferior people, even the mediocre ones will be the considered the best.

What this means is to trade an issue or a problem for something that turns out to be even worse.

Borgne is also used in different contexts such as to describe something which has a poor reputation; i.e. hôtel borgne or cabaret borgne which means a shady hotel and a shady bar, respectively.

But French philosopher and writer Jean Jacques Rousseau has an even more peculiar use of the word, when in one of his writings he referred to a “malformed nipple” as téton borgne or something like a one-eyed breast. Now, how weird is that?

2. loisible: an adjective that means having the liberty to do whatever you please.

Notice how the French language seems to make everything sound fancy? It’s the same with this word. Regular English cows “moo”, while the French vache tend to meuglé. And the sound they make is called meuglements.

Well, meuglé to you, too, Madame Vache!

4. Flâner: to wander or roam around leisurely with no particular destination or purpose in mind.

Somewhat similar to strolling or roaming around but with no exact purpose other than to idly loiter or pass the time; flâner is another word that has no exact connotation in English.

It is related to ‘flâneur’, a much-discussed (and debated, even) term which grew into popularity in 16th and 17th century France and refers to any individual who likes to stroll or saunter around town. There are plenty of interpretations about what a flâneur truly is – whether he is a mindless wanderer or an intelligent urban spectator. Either way, flâner (and flâneur) is quite an interesting idea.

5. Yaourter: literally “to yoghurt”. The expression “chanter en yaourt” means to make up words when singing.

You’re probably guilty of this, or know someone who’s notorious for making up words while singing. Well guess what, the French have a word for it, and it’s called “to yoghurt”.

Here’s a fine example of Chris Pratt doing just that (but with aplomb!) while singing the song Uptown Funk:

6. Hurluberlu: an eccentric person or a weirdo.

Though it sounds similar to the English word hurlyburly which means turmoil or uproar, the meaning is quite different.  In French, a crackpot or an oddball can be referred to as “hurluberlu”. Don’t you just love how weirdly the word rolls in your tongue and makes you want to say it over and over? That’s the magic of this weirdo word.

Leave it to the French to come up with fascinating names for animals. Though one might argue that bats aren’t necessarily bald.. nor a type of rat for that matter.. or even remotely related to rats, there’s nothing much you can do about it.

Everyone knows about the magical word ‘abracadabra’, of course, as well as its many permutations (like JK Rowling’s avada kedavra spell, anyone?). But the French have an even more fun, sounds-totally-made-up word for it. Abracadabrantesque. Because why say ‘ludicrous’ when there’s a more outrageously fun way to say it, eh?

Here’s another French word that makes fun twists and turns as it rolls off of your tongue. And that quirky weird wide-mouthed sound it makes? Ha! What fun! But saying this word to describe how deflated you are just might wear you off further. Try it! Ready? Say RA-PLA-PLA!

Similar to the English terms “what’s-his-name” or “what’s-her-name” or Mr. So-and-so and Ms. So-and-so.

Different languages and cultures have a name for someone unknown, like probably Jane Doe or John Doe in English. You could say that Monsieur Untel and Madame Unetelle is something like that. Except, of course, for the fact the the Untels had to follow correct French gender usage. Thus, the “un” and “une” and the changes in suffix. Couldn’t say the same for the straightforward  Mr. and Mrs. Doe!

Want more weird/fun/crazy French words? Check out the part 2 and part 3 of this article! We have 20 more weird but fun French words for you. Make sure you never miss any upcoming articles by subscribing to the weekly newsletter. You’ll also get a FREE French learning package when you do!