10 Weird French Words That Will Make You Chuckle

The French language is not just all beautiful poetry-sounding words and charming accents.

It also has a lot of peculiar words tucked up its stylish sleeve as well. You have probably come across some of those words in the first part and second part of this series of articles.

In this article, as in the previous two, we will be talking about words that are considered weird because of its funny sound,  the strangeness of the word itself, or the amazing fact that someone actually spent time to come up with it.

English is supposedly the language with the largest vocabulary. But still, there are a bunch of French words that do not have an exact equivalent in English. You’ll also be discovering some of those here. 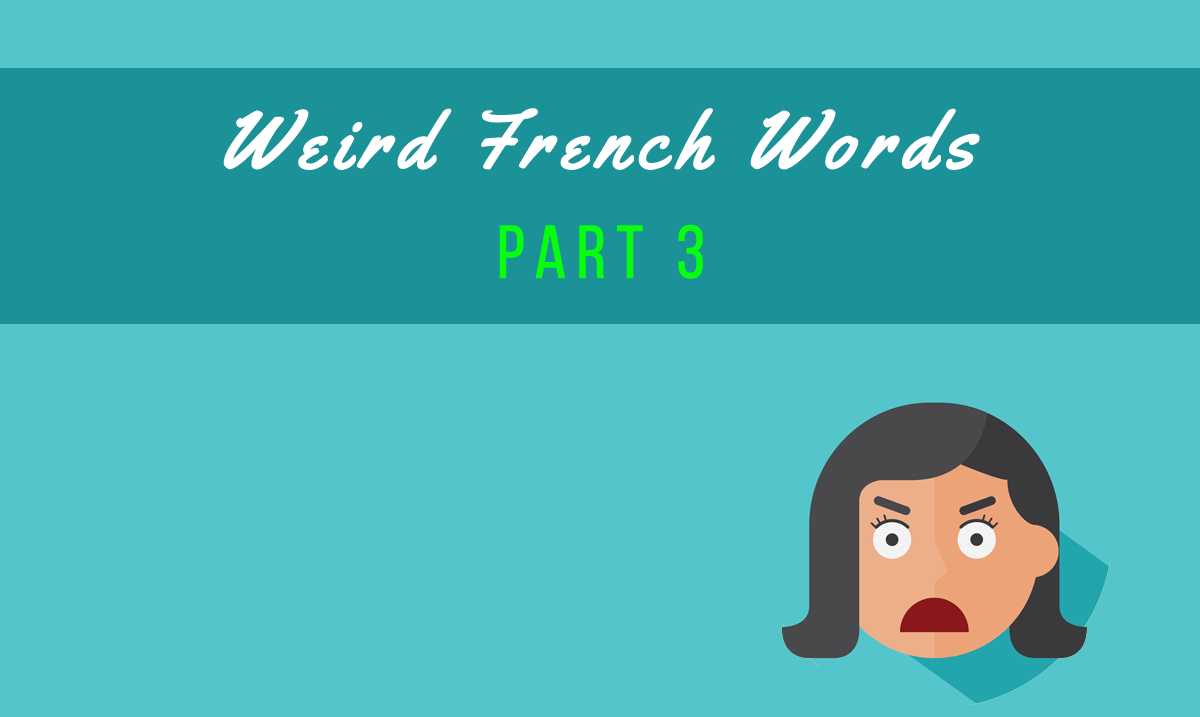 Yup, that’s one weird word, alright. First of all, we all know what a brassiere (or bra, if you wish) supports. And it’s not the neck. Whoever came up with this word seriously needs some re-thinking to do.

There is also an expression related to soutien-gorge which is “menteur comme un soutien-gorge” or literally “liar like a bra” but means a huge, shameless liar. According to the background of this expression, bras have often showcased womanly attributes in such a way that would sometimes appear misleading. Thus, the expression stuck.

So first we discover that bras are ‘neck supports’, and second, they’re liars too. Now that’s something you don’t read about every day.

It’s a bit weird to think of toes as fingers on your feet. But you have to admit that it’s technically the right name to call it too. But if you’d rather choose a less weird alternative, you can also say “orteil” for toes, and it still works just fine.

Literally, up to the “rim of the bowl” or something along the lines of “I’ve had enough!” and is used to express frustration or annoyance.

Not only is ras-le-bol a very fun thing to say (over and over, if you like), it can also up the ante in your conversations. Simply exclaim “j'en ai ras le bol!” each time you’re fed up and sick of things, and you’ll cement your reputation as a French-speaking drama queen in no time.

4. Jolie laide: ugly beautiful; someone who is unconventionally beautiful.

Leave it to the French to come up with a strange expression that scoffs at logic while enlightening us at the same time. Jolie laide is an expression used to refer to someone who is oddly beautiful; a lady that doesn’t fit the standard of beauty but is beautiful all the same.

Weird, no? Not quite. You see it often in every day – the lady with the buck tooth who lights up the room when she smiles, the girl with the closely-set eyes who seems weird at first look but when she looks at you, suddenly the rest of the world fades into view.

It’s the supermodel with the gap teeth or the vaguely awkward and lanky - but striking - Charlotte Gainsbourg.  It’s a concept of feminine beauty that embraces the unconventional and sees uncommon allure outside of what is the norm.

Yeah, French words can be utterly brilliant like that.

5.Rire dans sa barbe: to laugh quietly behind your beard while remembering something funny.

I know exactly what you’re thinking: who the heck comes up with things like this?

Honestly, these expressions are becoming weirder by the day. But when you laugh quietly behind your beard, remember this post.

6.Frappadingue: someone who is super crazy.

There’s regular crazy. Then there’s the frappadingue. The former is the kind you can hang with. The latter is something you should definitely steer clear of. Unless you’re a frappadingue yourself, then it’s all good.

Not to be confused with boo-hoo (the favorite word of crybabies), tohu-bohu is more badass on so many levels. This one means chaos! Turmoil! Anarchy! Bedlam! Pandemonium! And all the crazy confusion associated with those terms.

Though originally associated with a Hebrew phrase that made its way to French usage, this term makes it on this list because… how can you ignore a seemingly harmless-sounding word that is in fact totally filled with sass?

8. Spleen: an intense dissatisfaction or ennui

You know how the French are with our mélancolie and all-around desolation. But spleen is several times worse than simple ennui. (No, this is not the same as the spleen you know, and it’s not found inside your abdomen.)

This spleen is not a feeling you would want to be anywhere inside you.

It means a penetrating kind of desolation.

A fathomless pit of despair.

Do you feel sad just simply reading this? Yeah, that’s probably spleen, too.

This word is the slang version of the French term futé which is similar to “cunning”. But the way this word is used could often mean the opposite, as it’s mostly used sarcastically to mock someone deemed not too bright.

Another harmless word to watch out for, this one might sound cute but don’t be fooled.

There are other French words that mean curly hair, such as bouclé or frisé, but those two are not in the same playing field as crépu. Crépu is not your average, standard curly. It’s a step far above the competition. Like the Ronda Rousey of curls -- it’s on a league of its own.

Think of the kinkiest hair you could imagine. Curl it up some more… and a little bit more. When it’s all frizzy and wild, now that’s crépu.

Why there has to be a specific word for this, I don’t really know, but you gotta marvel at how fussy and precise the inventor of this word is.

So there you have it, ten more weird French words and expressions. Do you have weird French words that you think should make this list? Look for it in the first and second part of this series. If you still couldn’t find it in those lists, feel free to leave a message in the comments section.

Hungry for more French words? Whether it’s weird or not, learn all about it in the French Vocabulary Mastery Course.