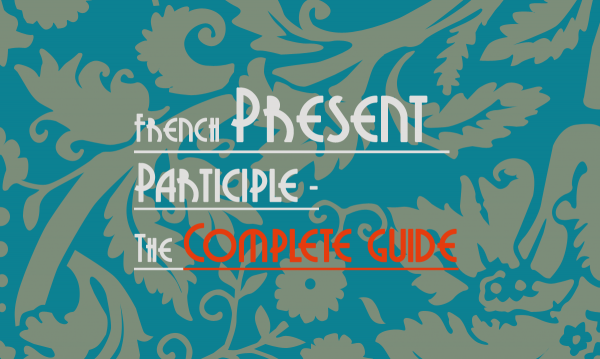 Before we go any further with this, let's try to address this question that I'm pretty sure is in your mind right now.

Why we should learn the French present participle?

They say that the forgotten one, if it does not want to be forgotten, it should act strong and be flexible. This is undoubtedly true for the case of the French participe présent here. This participle could be used either as a gerund, a noun, a verb or an adjective. Employing it properly will make your sentence light but beautiful.

Ready to start learning about it? Let's go!

First problem: How to form a present participle in French

Some of you may already know the rule to form the present participle of a verb, but let's review it one more time here.

The good news is that the rule is pretty straightforward and there are very few exceptions. For regular and all but three irregular verbs, the present participle is formed by dropping -ons from the form of the first person in plural (nous) of the present tense and adding -ant.

We have only 3 exceptions, 2 of them are verbs that always appear in the list of exceptions for all tenses in French: avoir et être. The 3rd one is also a well-known verb: savoir (to know).

When you SHOULDN'T use the French Present Participle

So, when SHOULD you use it?

It might not catch your eye at the first sign, but the French present participle could be found in many sentence structures, as detailed below:

​This is formed with the auxiliary avoir/être in present participle mood + the past participle of the verb (similar to the passé composé).

Having accepted the defeat, the players went home.

The rule of choosing the auxiliary (avoir/être) is similar to other compound tense in French (e.g: passé composé).

This structure is used to describe an action that took place right before another action. It is nearly similar to the structure après avoir/ être + participe passé

​I hope you found this article helpful and I am looking forward to your comments.

If you want more simplified (and not boring) grammar lessons, check out the French Vocabulary Mastery Course.