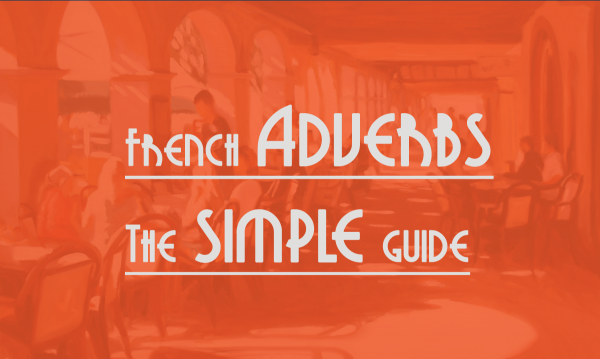 Looking for a simple guide on French adverbs? Here in this article, we'll break down French adverbs into the simplest terms and make learning all about it a breeze for you.

Like other languages, the main words you'll learn in French are nouns, verbs, and adjectives. However, you will definitely need more than that to express your full idea. This is where adverbs enter the picture.

I'm sure you already know that French adverbs use the ending “-ment” like the “-ly” in Engish, but that’s not all there is to it.

This article will answer some questions you may have about French adverbs such as:

Let’s spend 5 minutes and all your questions will be answered.

What can a French adverb modify?

A French adverb, like its counterparts in other languages, can modify a verb, an adjective or another adverb. It can also relate to the whole sentence, telling you what the speaker is thinking or feeling. In other words, it can modify almost everything, except a noun (which is modified by an adjective)

How to form a regular French adverb from an adjective

Although there are many adverbs that do not have the ending –ment, this ending is undoubtedly an important category of adverbs.  Let’s get through the general rules:

If the adjective ends with a consonant, change it to the feminine form (to get the “e” at the end) and then add -ment:

The different types of French adverbs

The table below lists down the main types of adverbs in French and commonly used examples:

The placement of French adverbs

When an adverb modifies a verb, it is placed after the verb

If you are using a compound tense, the adverb will be placed after the auxiliary (the conjugated verb) but before the participle. E.G: Nous avons (verb) bien (adverb)dormi.

If an adverb modifies an adjective or an  adverb, it will be placed before the word it modifies.

​Adverbs and adjectives are sometimes confusing, so I hope this article could help you to understand it better and therefore you could speak and write French correctly.

120 Common French Adverbs to Add to Your Vocabulary

Improve your French faster with the French Grammar Mastery Course!