The Differences Between French in Quebec and France

The Differences Between French in Québec and France 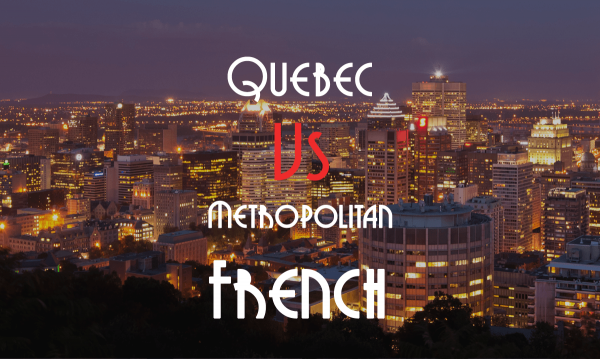 [You can also listen to this article plus additional information in this podcast episode  here.]

It can be said that Metropolitan (or Standard European) and Québec (or Canadian) French, while both rooted in early modern Classical French, are two completely distinct varieties of French. While even a non-French could correctly make this assumption, most would only have a vague idea on the level of difference between the two.

Most linguists agree that the difference between them is larger than that of British and US English, and is comparable to European vs. Brazilian Portuguese.  But before examining the differences between Metropolitan and Québec French, let’s review the history of how  the French language came to be in Canada. This will help us understand the differences better.

Part 1: The History of Canadian French

During the Age of Exploration, King Francis I (Francois 1er) commissioned a western expedition to find another route to China. In 1534, Jacques Cartier, the leader of the expedition, landed in the Gape Peninsula, planted a cross,  and claimed ‘New France’ for the King. French settlers began to colonise the new territory, which subsequently expanded  until it took up half of what is now known as the North American continent.

The French colonists continued to settle in New France until the 17th and 18th centuries, bringing with them Classical French, along with a smatterings of the type of French that is spoken north of Paris, and of languesd’oil during the era. Some linguists believe that, during this time several French varieties became merged in the new colony of New France.

The year 1760 saw the beginning of British rule of the New World, which isolated the French colonies in Canada, particularly those living in the modern day Québec region. The French that was brought to the colony was also isolated, during this time the noticeable differences between the French varieties began to appear. Standard European French developed with European influences, while Canadian French were infused with significant influences from the English language.

The late 1800s saw a shift towards industrialization in the Canadian Confederation. This increased the interaction between the French Canadians, English-speaking Canadians, and the United States. Business deals were mainly in English, which forced French Canadians to use English alternatives for words that were missing from the French Canadian vocabulary during the time. These words were  mostly adopted from the fields of manufacturing, trade, law, and the government.

The Quiet Revolution in the 1960s saw a major drive towards embracing their cultural identity among French Canadians. This also promoted a sense of Québec nationalism that is still present even today, with some Quebeckers still wanting to become an independent state from Canada. In 1977, the Charter of the French Language was drafted by the Parti Québécois and its objective was to protect the French Canadian language-also known as Québécois. The Charter of the French Language made Québec French the primary language  used in business in Québec, and, moreover, severely limited the use of English in public signs. At present, Québec French is the primary language spoken in Quebec and is also widely used in Ontario and New Brunswick.

Metropolitan French has evolved directly from its European roots. Although it can be seen to have a few influences from neighbouring foreign languages, such influences are subtle, even barely noticeable, in spoken Metropolitan French. With strong influences from the British and the nearby United States, Québec French, on the other hand, displays a greater number of adopted English words, especially in informal spoken Canadian French.

It is almost a given that the two varieties of French, when spoken, will have different accents and intonations; just like British and American English. Curiously, the written, as well as the formally spoken Québec French, shares, with minor differences, the same structure and grammatical rules as Metropolitan French. It is when Québécois is spoken informally that the differences between the two varieties of French become obvious. A French Canadian will generally have no problem communicating with anyone speaking Metropolitan French, though he or she may have to adjust his accent somewhat to be understood.

European French speakers, for their part, will probably understand formal spoken Québécois, but may get confused with informal spoken Québécois. The reason for this is that informal Québec French uses idioms, words, cultural references, and expressions that are unfamiliar to those who speak Metropolitan French.

The following are some of the differences between Metropolitan French and Québec French.

There are several grammatical features that exist in spoken Québec French that make it distinct from Metropolitan French. For example, the syntax of informally spoken Québec French makes much lesser use of specifiers such as relative clauses wherein “que” is used as a relative pronoun in many cases. For example, a Quebecker might say “J’ai trouvé le document que j’ai de besoin,” whereas a Metropolitan French speaker would form the sentence as “J’ai trouvé le document dont j’ai besoin.”

Some specifiers, like prepositions, collocate with certain verbs are taken out altogether. An example would be a Quebecker will say “J’ai un enfant à m’occuper,” but a Metropolitan French speaker will say this as “J’ai un enfant dont je dois m’occuper.”  This Québec French way of forming sentences often results in major syntactic differences between the two French varieties.

Other differences in the vowel usage between spoken Metropolitan French and Québec French include the intonation of the vowels, and the speed in which the vowels are pronounced in sentences.

Québec French vocabulary is distinctive from Metropolitan French; primarily due to the strong influence of the English language upon it. Also called Anglicisms, the borrowed  English words are even more obvious in spoken Québec French. With the Quiet Revolution however, the burgeoning sense of Québec nationalism made French Canadians try to consciously limit the use of Anglicisms in more formal forms of speech. When Québec French uses too much Anglicisms when spoken, it is usually considered as franglais-a derogatory term.

The loaned words in Québec French are not limited to English alone. Some are borrowed from the aboriginal languages that the early settlers were exposed to during colonisation. Examples of these aboriginal words include carcajou, meaning wolverine, atoca for cranberry, manitou meaning VIP, and micouène, which is a large wooden spoon.

There are words in Québec French that refer specifically to French Canadian culture that do not exist in Metropolitan French. Some examples of these words are poutine,tuque, and dépanneur. The word dépanneur, does exist in Metropolitan French but it is used to refer to a mechanic or an electrician who makes house calls, whereas the word refers to a “small grocery or corner store” in Québec French.

The vocabulary of Québec French also gives evidence of its isolation from France during the British rule in the 1700s. Some words in Québec French appear to have evolved differently in New France. Some examples of this are barguiner, pogner, and magasiner endured due to their frequency of use in informal speech, yet evolved differently from its European counterparts.

The difference in pronunciation has already been briefly discussed in vowels. As far as consonants are concerned, there are very few differences between Québec French and Metropolitan French. These differences however, are, nonetheless, noticeable. Take for example the pronunciation of the letter “R.” Metropolitan French pronounce a trilled or a flapped “R.” While this is also the case in Québec French, a good number of French Canadians still pronounce “R” with a uvular sound, much like it did in Classical French several hundred years ago.

Fun tip: Want to hear the differences in how Canadian French and Standard European French are spoken? Try watching a lot of French movies! Get your recommendations here plus tips on how to learn French with movies.

Québec French speakers often use the second person pronoun tu more often and in a greater variety of situations than speakers of Standard European French do. While this does not pose much of an issue in French speaking Canada, it is viewed as impolite in France. Even in Québec however, an elderly person might get insulted if the word tu is used when addressing them, especially when it comes from someone serving them. Such persons who use tu instead of vous are regarded as rude and are lacking in manners. This is why sales-people, government personnel, and suchlike in French speaking Canada are instructed to use vous instead of tu when speaking to clients.

Examples of the phrases, slang words, and idiomatic expressions that are unique to the Quebec French category are cited in the next category.

Slang words and idiomatic expressions are where the major difference between spoken Québec French and Metropolitan French lies. This is primarily because Québec French has a large collection of unique slang words and idiomatic expressions that are not present in European French, and, therefore, will not make sense to a Metropolitan French speaker. In fact, the number is so great that several reference books dedicated to the subject have been, and still continue to be, written.

Here are some of the expressions and slang words unique to the Québec French. The examples below range from being weird to straight-up funny, even to a non-French speaker.

An additional video from French.about.

I have to admit that it is quite impossible to mention most, if not all of the differences between Metropolitan French and Québec French. However, I believe that the differences that were covered here will pretty much give you an overview of the unique qualities of Québec French in relation to Metropolitan French. Please forgive me if I have missed any important differences with the two varieties of French. If you do spot that I may have missed, please feel free to share it on the comments section.

Try watching different types of French movies so you could train your ears to listen to different sounds of spoken French. To help you with that, check out this guide to French cinema.

Q&A: The French and Their Baguette