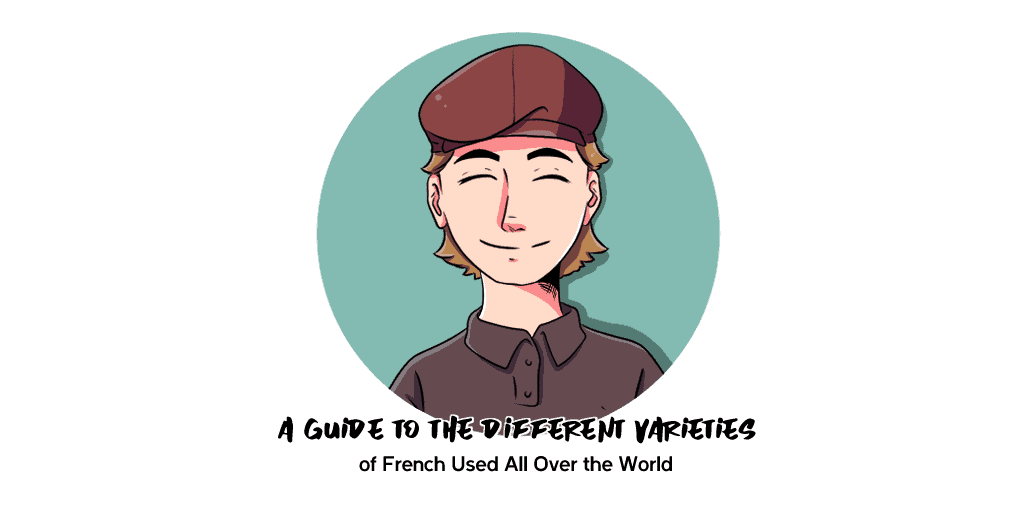 Did you know that there are approximately 76 million native French speakers? And another 235 million people that speak French every day? French is a top 10 language in terms of speakers around the world!

French is the official language in more places than just in France – you can find native French speakers in parts of the Americas, Africa, and many of the French territories.

The French language is an essential part of several cultures, and each place has its own influence on the way that they speak French. In this article, we will take a look at the different varieties of French being used all over the globe.

Table Of Contents
1
How did French Become an International Language?
2
French in France
3
French in Europe
4
French in Canada
5
French in Africa
6
French in the French Territories
7
SIGN UP BELOW... AND GET INSTANT ACCESS TO THE FREEBIE

How did French Become an International Language?

As the Kingdom of France began to spread internationally, starting in the Middle Ages, so did the widespread use of French. The spread of the French began in Europe as it became the official language of the European courts and used prominently in education and diplomacy during the 17th-18th Centuries.

During the same period, the Kingdom of France set out to colonize several parts of the world, a major location being the Americas. The new colonies introduced French to new regions now recognized as parts of Canada, the Caribbean, and South America.

Constant wars led to the Kingdom of France losing a lot of its overseas territories in the 18th-19th Centuries, but the French language remained.

During the 19th Century, France began to establish colonies throughout Africa. Even after the African countries gained independence from France, the language was so widely spoken that it remained the official language in many places.

As you might’ve guessed, the home of the French language is France. Even since the rise of the Kingdom of France, the French language holds an essential role in the country’s politics and education. With such pillars, the francophone dialect that you hear in France is the standard version of French that most people refer to.

French is spoken differently throughout the country, with specific regions and cities having their accents, tones, and quirks that they use to communicate.

In France, the most standard type of the language is Parisian French, often called International French. As the capital of France, French spoken in Paris is based more closely on the official language rules as used in education and diplomacy.

Parisian French is generally spoken faster than in other places and uses more connected words or pronunciations for a more fluid tone.

As compared to a southern accent in the US, the south of France also has a peculiar accent for the local French. One of the most notable in the region is called Marseillaise French. French in this region is fast with a lot more pronounced syllables.

France isn’t the only place where they speak French in Europe. In fact, it’s the official language for two prominent countries - Switzerland and Belgium.

While French remained the official language in the Kingdom of France, the language began to assimilate into neighboring countries. It was selected as an official language due to being the standard language for high society and the educated.

In Switzerland, there are several word differences. Many of the numbers are different and other common words such as salut (France) vs. adieu (Swiss) when saying goodbye; or déjeuner (France) vs. dîner (Swiss) for lunch.

In Belgium, many of the differences come from a change in accent. Most Belgians speak in a Flemish dialect, which derives from the Dutch language.

The hub for French speakers in Canada is in the Quebec province. As Canada’s largest province, there are more than seven million native French speakers (as compared to nearly one million) in the rest of the country.

There was a time when French was the primary language spoken in Canada until the early 19th century when British immigrants arrived. French remained in the western part of the country, now recognized as Quebec.

Canadian French, or Quebec French, is the closest related francophone compared to the Parisian standard. Many people compare the differences to UK English vs. American English.

Most speakers can generally understand each other, although there might be slight accent differences and word use.

French is widely used throughout Quebec - prominent in the media and taught in schools.

The Differences Between French in Québec and France

French in Africa is perhaps the most interesting place to study the language. Africa has the most French-speakers compared to any other continent, with approximately 75 million first- or second-language speakers. Several other local dialects have derived from French.

French arrived on the continent during the time of colonial settlement from France in the 19th century. Many of the countries which use French as an official language were former French colonies. The regions where people speak where French most prominently include West Africa, Central Africa, and the Horn of Africa.

African French is the most varied due to blending with local languages. It’s one of the hardest to decipher for non-native speakers because of a phenomenon called “code-switching,” in which several languages are used all within the same sentence.

French in Africa borrows words from local languages and vice-versa.

French in the French Territories

Not all former French territories established their independence. France maintains several territories in various parts of the world that fall under the jurisdiction of the country. In addition to policies, French is also the official language in the territories.

Although Haiti is no longer a French territory, it remains closely related to France and worth mentioning. French settlers came to France around the same time as in Canada, and French remains a dominant language.

Haitian French is one of the most closely related to Standard French, and many locals prefer consuming French media to assimilate to the culture.

Some of the French territories include French Polynesia, French Guiana, and Reunion Islands. Even with locations around the world, having French as their official languages connects them all to the culture.

When you learn French, you’ll often learn the standard Parisian French. With so many countries around the world that speak French, you’ll have no issue traveling to any continent and finding native speakers to practice your French.