How to Ask Questions in French

Questions are an essential part of any conversation, and being able to properly formulate a question in French is an extremely important part of your learning. Especially if you are naturally curious, asking questions in French is something you should want to learn more. In this article, we will look into the different ways that you can ask your questions using the French language. 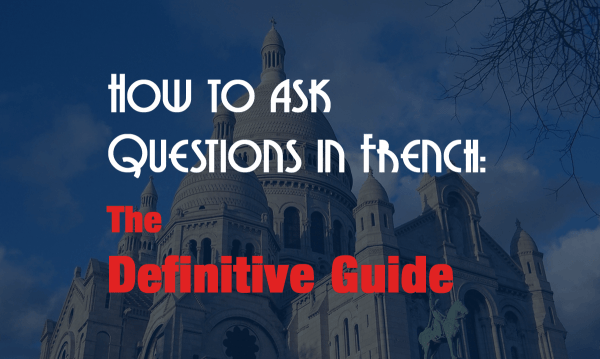 There are five ways in which questions are phrased in French. These are the following:

Get your free copy of The Most Common Questions in French

I. TURNING A STATEMENT INTO A QUESTION

The easiest way to ask a question in French is simply to take any statement and make it a question by changing the pitch of your voice. In writing, this can be done by adding a question mark at the end of the sentence. This type of asking questions is deemed informal but is still widely acceptable in regular, everyday type of conversations. This method of asking questions is also commonly used in English, and like in French, the expected reply is either a yes or a no. For example, “You are a dancer?” “She told you I'm not interested?” “You saw the movie?” All of which are regular statements-turned-questions. Some examples in French:

Another simple way to ask a question in French is to add est-ce que in the beginning of a sentence. Est-ce que literally means “is it that” in English, and is inserted before a regular statement to turn it into a question. The rest of the sentence structure stays the same.

You can put any question words right before it in a sentence to further create an even more specific question (not just a yes or no question).

Here is the structure:

More details and examples will be given on this when we discuss the question words later.

III. CHANGING THE ORDER OF THE WORDS TO FORM A QUESTION (INVERSION)

Inversion, or changing up the structure of a sentence, is the more formal way of asking questions in French. Normally, the subject is followed by the verb, but for the inverted questions, the verb is placed before the subject and then joined by a hyphen.

The subject and verb switch places and are linked by the hyphen.

In cases where you are very sure that the person you are talking to will agree with you, you can add ne c'est pas at the end of the sentence. It is just similar to the English usage of “isn't it?” or “right?” at the end of a question.

Non works the same way. It literally means “no?” and is also added at the end of the sentence. Hein is also similar. It is used just like “eh?” in English, and is often used in informal conversations.

The fifth and last method of asking questions is to use interrogative words. The question words may be placed in the beginning or at the end of the sentence. It can also appear right before est-ce que, or before the inverted subject and verb.

Examples: When did you arrive?

Here is a list of  the most commonly used question words in French.

Combien de personnes vas-tu inviter?      How many people are you going to invite?

Some French learners often confuse ou (no accent) and où (with accent). The first one means 'or' while the second means 'where'.

Example: Où allez-vous? (where are you going?)

These are pronouns which could mean who, whom, what and whose depending on how you use them: to refer to a person or thing, the subject or object, or if it follows a preposition. This is by far the most complicated of all question words, and it would be advisable if you could learn pronouns as well to get a better grasp of this topic.

Here are the basic rules:

3. Que and quoi are used when talking about things and could mean “what?” The difference is, you use quoi when it follows a preposition.

The forms of quel are the following:

Lequel is used to mean “which one?”and here are its different forms:

Laquelle de ces valises est à Fred?  Which of these cases is Fred's?

Now that you have this guide, you'll know how to ask questions in French. If you need clarification on this topic, do not hesitate to contact us in the comment section.