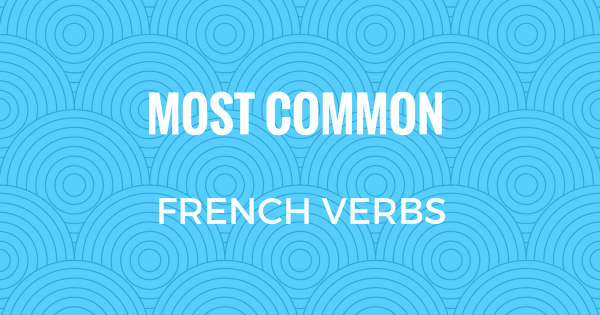 You can bookmark this handy guide or print the PDF copy for easy reference.

Get the FREE PDF

If you sign up to the newsletter, you'll get a more extended list available in PDF format. You will not only get my weekly newsletter upon sign up, but also a French learning package containing tons of FREE resources including the PDF for this list and so much more.

If you have already signed-up to the newsletter, check the link you received before. The PDF is already uploaded there.

Before we proceed to the long list of 200 most common French verbs, let's take a look one-by-one at ten of the most useful French verbs and see them with their present tense conjugation. Let's start!

On the top of the heap of French verbs is the most useful one of them all. Though this verb is highly irregular, you need to commit this to memory since you’ll find this one used repeatedly in everyday speech, either alone or as an auxiliary verb for compound tenses.

Here is the conjugation of etre.

For more, visit: The French Verb Être: All You Need To Know

The second most useful French verb avoir, is also an irregular verb. It is also used by itself or with another verb to form a compound tense.

Here is avoir in the present tense.

The third one on our list is another irregular verb. Faire is also a highly useful French verb which means “to do”. It also translates to “to make” in some cases.

Now let’s take a look at the conjugation of faire.

See also: All About The French verb Faire

The fourth French verb on our list is, unfortunately, another irregular verb. I know, I know. Don’t worry, it gets better when you memorize this verb fully. Aller also works as a standalone verb or as an auxiliary to form compound verbs for future tenses.

Here’s the conjugation of aller.

See also: All About the French Verb Aller

Okay, now we’re on to the fifth most frequently used French verb on our list, and guess what? Yes, it’s another irregular verb (will this torture ever end?--yes it does). Dire means “to tell” or “to say” and I must say, you’ll see and hear this quite often!

See also: All About the French Verb Dire

Another most frequently used French verb is “voir” which means, to see. Aside from its literal use though, voir can also be used figuratively as in “to understand” or “to experience”. It all depends on the context and usage.

See also: All About the Verb Voir

Savoir which means “to know” can be quite a difficult verb to know. (Get it? Okay.)   Aside from the fact that it is yet again another irregular verb, savoir has a close sibling connaître which also means “to know” and the differences can be quite complex! But that’s a topic for another day.

Venir is once again an irregular French verb and it means “to come”. Here is its conjugation in the present tense.

Another very important French verb is vouloir. It means “to want”. Here’s how to conjugate it in the present tense.

Finally on our list of the most useful verbs is pouvoir which is equivalent to can or to be able to in English.

So there you have it, 200 of the most common French verbs. You can also check out the different French vocabulary lists such as:

Be sure to start practicing these words with our Ultimate French Pronunciation Guide!

Of course, conjugation is another thing you'll have to work on. You know what will help you learn French verb conjugations effortlessly? French Verb Drills!

Learn more about it below.