Dogs are loyal, sweet, cute, and cuddly---and almost everyone loves them. More so the French! The French are notoriously known for walking around everywhere with their furry friends, and everywhere you turn, you’ll most likely find dogs in every size and shape. 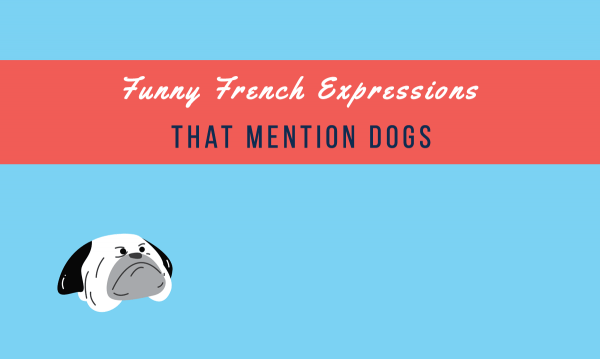 Dogs inside restaurants, supermarkets, at the hairdresser, on the streets; small dogs, big dogs, medium dogs, dogs in bags, dogs with sweaters, dogs having a meal in restaurants with their human family. Well, you get the point.

This fascination with man’s best friend has spilled over to idioms. Several French idiomatic expressions mention dogs in them, and here, we will learn all about it.

Here’s the thing though. The word for dog in French is chien and when used as an adjective it translates to something negative such as “wretched, nasty, ill” or just general pleasantness. For example, when we say chien de temps (though this is really an old expression that is no longer used anymore), it means bad or nasty weather. Or when someone tells you about ma chienne de vie, he/ she is talking about the wretched, thankless life he leads.

But dog lovers need not feel horrible about this pejorative use of the term. It’s somewhat similar to the use of the term ‘bitch’ (a female dog) which is used by English speakers to refer to all types of awfulness.

But enough about that introduction. Let’s start with the list of expressions, shall we?

Literal meaning: to treat someone like a dog
What it really means: To treat them badly, physically or emotionally

Poor dogs. All over the world, there are plenty of dogs tied up outside, freezing in the cold or panting under the heat of the sun. So when French people say someone is being treated like a dog, it means the poor soul is experiencing ill-treatment. But not necessarily being tied up outside the house though. Hopefully.

Of course, dogs have now been properly domesticated and are usually charming and sweet (if cared for properly). But when the French uses this expression to describe someone’s character, it means he/she has a bad attitude.

Literal meaning: dog that barks doesn't bite
What it really means: he talks a lot but he’s really harmless

In English, we know this expression as “its bark is worse than its bite”. Because of course, if a dog intends to hurt you, he would bite you in the ass (or feet) without as much as a squeak. In short, barking dog = c’est pas grave. But hey, we are not responsible for any dog bites if in case you treat this expression as a general truth, okay? (common sense tip: if the dog is baring his teeth while barking, don’t pet its head.)

When you’re in a bad mood, the French would say you’re in a dog’s mood. Or you’re being bitchy about everything.

Literal meaning: to have a dog’s pain
What it really means: to be in a lot of pain or to be doing something very difficult

Oh, man. Here we go again with the poor dogs. So when the French say that you’re in a dog’s pain, life must be pretty terrible at this point.

Useless news articles that are full of nonsense fluff are referred to by the French as crushed dogs. This could also mean misleading news headings that are not related to the content of the article. Basically, bad news reporting and awful journalism constitute chiens écrasés.

Literal meaning: to sleep into a gun’s dog (Un chien de fusil is the “hammer” part of a gun)
What it really means: to sleep in a fetal position, curled up in a ball

This might seem weird to some (if not all), but this expression is related to the term “un chien de fusil” which is the s-shaped hammer part of a gun, especially antique firearms. So when the French say someone is sleeping in the “chien de fusil”, the person is curled up in an S-shape, or in a fetal position.

Literal meaning: to burst/ die like a dog
What it really means: to die in an undignified manner, or due to neglect

We have already established that the use of the word chien as an adjective does not mean butterflies and rainbows. So when a person is said to have died like a dog, it can only mean no good. A bad death therefore could be referred to as dying like a dog. 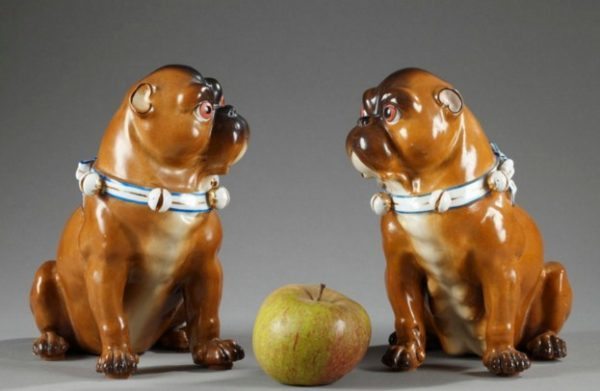 Literal meaning: to look at each other like earthenware dog statues
What it really means: when two persons gaze at each other in a tense, aggressive way

No one can say for sure when this expression came to be, but you gotta admit, earthenware dogs really do seem to be eyeing each other with animosity. (What’s up with that anyway?)

Literal meaning: to arrive like a dog in a bowling game
What it really means: to turn up when least desired or expected

Can you imagine what a group of competitive bowling players would feel if a dog suddenly shows up to join their game? Yup, it would be totally unexpected...even slightly awkward.

Unless the dogs look as ready as this. 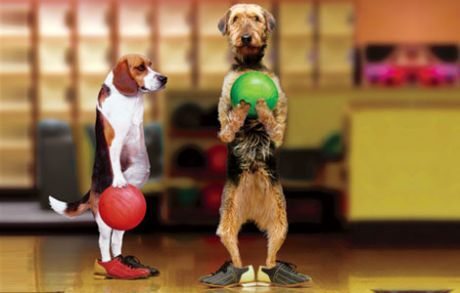 Literal meaning: to have some dog
What it really means: to be attractive, to have a lot of charm

When women have that little extra charm that makes them quite desirable, the expression avoir du chien can be used. Somewhat similar to the English term “foxy lady”, though a little old-fashioned, this expression is used for women only and refers to the complete package; not just good looks.

Literal meaning: crazy like a young dog
What it really means: crazy

Puppies---especially ones that have not yet been properly trained---can be difficult to control. They run around, sink their growing teeth and claws into furniture, dig holes, and basically act like crazed little devils, albeit cute ones. So when French people say someone is crazy like a young dog, you know exactly what they mean.

Literal meaning: the dog barks, the caravan passes
What it really means: it happens despite what is said about it

This expression can be traced back to Arabic origins and used as a poetic way to explain how despite other people yapping around with their insults or comments, things would still go on. Just like how the camels pulling caravans would still go on their way despite dogs barking at it as it passes.

Literal meaning: name of a dog
What it really means: an expression of distaste

Literal meaning: a weather to not put out a dog
What it really means: bad weather

It’s raining so common sense dictates that you shouldn’t bring your dog outside. Otherwise you’d be guilty of #1 (traiter quelqu'un comme un chien). So if it’s not a good time to take your dog out, better stay indoors (with your dog) and keep yourselves warm.

Go ahead and practice these expressions related to dogs in French!

Do you have any other French expressions about dogs that you would like to add? Feel free to leave a comment below!

….and if you want to learn more French expressions, check out this e-book from Talk in French: 365 Days of French Expressions.

Here are some FAQS about French Expressions with Dogs

What are some cool French phrases?

L’appel du vide literally translates to “the call of the void,” but actually refers to the sudden urge to go wild, and be reckless. We can use it for people who, out of the blue, want to do crazy things. They are almost pulled toward spontaneous activity, like they’re attracted to a siren’s song.

Mauvaise honte, literally meaning “bad shame,” is actually a phrase to describe someone who talks down their accomplishment, in hopes of someone talking it back up. This false modesty has its own phrases in English, such as “humble bragging” or “fishing for compliments.”

Amour fou, literally “insane love,” just means uncontrollable love. Like a crazy passion that consumes a relationship. However, the literal translation isn’t far off the mark. Amour fou has a negative connotation, unlike other romantic expressions, as it implies that this intense passion can actually damage a relationship, and make it unhealthy.

What are some famous French sayings?

“Je pense, donc je suis.” Rene Descartes is better known as the founder of modern Western philosophy. You might know this quote better in its English form: “I think, therefore I am.”

“La vérité vaut bien qu’on passe quelques années sans la trouver.” Jules Renard remarks on the value of finding the truth for yourself: “Truth is more valuable if it takes you a few years to find it.”

What are the most common words in French?

Of course, it is important to know how to use these words in a sentence! Practice using your words properly, and gradually build your vocabulary with us.

What are the French question words?