When to Use Tu vs. Vous in French: The Ultimate Guide - Talk in French

When to Use Tu vs. Vous in French: The Ultimate Guide 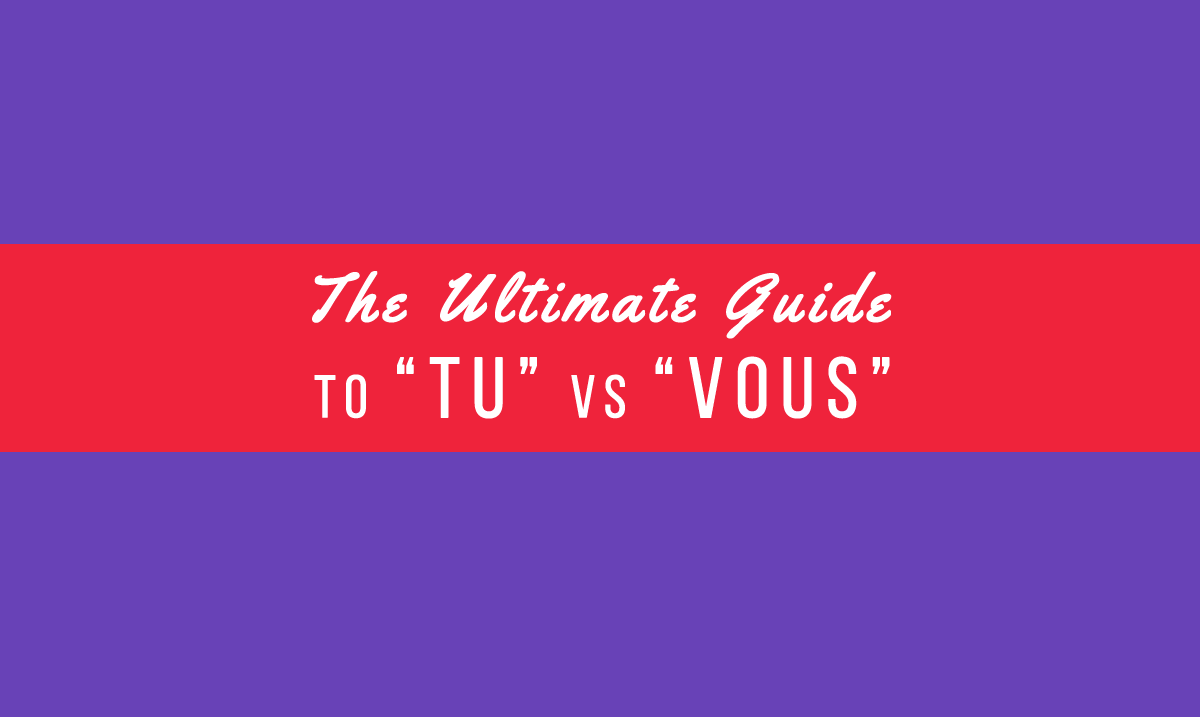 In a perfect world, using tu and vous when speaking French is a simple walk in the park. But no, we’re not as lucky as that.

The sad reality is, the rules can be complicated and French learners who find themselves interacting socially with French people often struggle on which “you” to use.

But wait---tu is for children and friends, and vous is for adults and strangers, right? Well yeeaah, that’s a good rule of thumb to follow for starters. Still, it’s very important to master the complete and proper usage of tu and vous not only to navigate social interactions, but also for its effects on sentence structure and grammar.

Today, we’ll erase all possible confusions about tu and vous. This article will show you all the ropes about this tricky topic.

What's in this article? (Click for quick navigation)
I. General Rules: When to use vous to say “you”
II. General Rules: When to use tu to say “you”
III. Sample scenarios
IV. Tu and vous in other parts of speech
V. Unsure which one to use? Ask!
VI. Frequently Asked Questions About Tu and Vous
learn step-by-step with the french grammar mastery course﻿﻿﻿﻿

I. General Rules: When to use vous to say “you”

Let’s start with the basic rules. You use vous with:

When you have no idea whether you should use vous or tu: better to err on the vous side than offend someone with tu. Later on you can just ask if you should be on more familiar terms and switch to tu.

Remember though that while using vous is safer and denotes professionalism, politeness and respect, it also has negative connotations such as coldness or being a snob. But when in doubt, the positives of using vous could still outweigh the negative.

II. General Rules: When to use tu to say “you”

Tu is the go-to form when addressing someone you are very close to, such as:

You also use tu when addressing someone in a similar social standing or situation as you are. This includes:

Tu is also used when talking to inanimate objects, non-humans, animals, and when praying to God.

Tu is also for speaking to children or people who are obviously much younger than you are.

Another reason to use tu is when you’re not feeling respectful towards someone. To prove a point (that you hate his guts and you’re pissed off), you can use tu.

The rules mentioned above may not be cut-and-dried so let’s have a look at specific examples below.

Co-workers speaking to each other

I cannot stress this any further, but when in doubt: use vous.

An adult speaking to a child: use tu generally

A child speaking to an adult: use vous

Child speaking to another child: use tu

Students to teacher: use vous

Human to non-humans: use tu

Still a little bit tricky for you? This LA TIMES flowchart might help you. 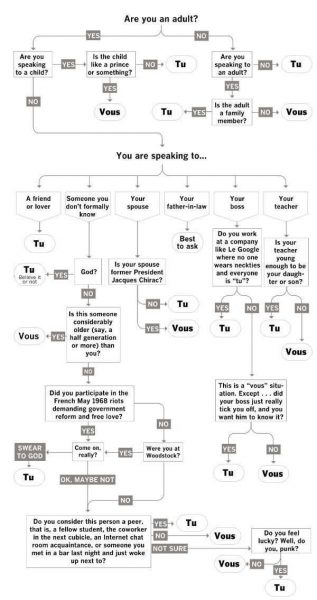 IV. Tu and vous in other parts of speech

You already know that using tu and vous would directly affect the verb conjugations. But here let’s look at the other tu and vous forms:

V. Unsure which one to use? Ask!

If you find yourself really unsure whether the situation calls for a vous or a tu, don’t worry, it’s okay to ask. Here are some questions you could use in navigating the move from vous to tu:

When you’re asked the same questions above or if you would like to set the level of familiarity during your conversation, here are some useful phrases:

Most of the cobwebs have probably been cleared in your mind by now. But maybe you still have some niggling questions. Here are some commonly asked questions and their respective answers.

Q: Are there ever any instances when using “vous” might offend someone?

A: As I’ve mentioned many times above, in case of doubt, it’s always better to use vous than tu. But there are some very rare cases where using vous can offend a person. I know you’re thinking, “you gotta be kidding, right?” Nope, not at all.

Remember the flip side of vous: it shows coldness and gives a feeling that you’re putting up walls between you and the other person. For example, with former lovers.

The jump from tu into vous would signify that you’re officially back to being strangers again. Also when one of your good friends suddenly talk to you using vous, it’s disconcerting.

Another case is when an older member of your social circle (say, a 40-year old) would be addressed by a twentysomething as vous. Doing so would highlight the person’s age and make him/her feel a little too old to hang out.

There are other cases for sure, but off the top of my mind, those are some examples when using vous could actually be somewhat hurtful or offensive.

Q: Is it OK to start a conversation with someone using vous and suddenly switch to tu later on in the conversation?

A: It’s possible. Let’s say you begin talking to someone using vous because you’re not so sure how to address him or her yet. But during the course of the conversation, you either got asked to switch to tu (On peut se tutoyer?) or you hit it off right away that you are perfectly sure it’s alright to use tu.

It’s still best to ask the other person of course, but if you’re super sure you’re hitting it off, go for it.

Q: Is it alright if one person uses “tu” while the other uses “vous”?

A: In most cases, people either address each other as tu (together, and vice versa), or vous. But in situations like a teacher addressing his young pupil, then yes. For reference, see the sample cases above.

Q: Do “formal vous” and “plural vous” always have the same conjugation?

A: Yes, the conjugation between the formal and plural you (vous) is always exactly the same. That’s good news, right?
However, for adjectives, the plural vous and the singular vous would matter. For example:

You are beautiful. (singular). The speaker is complimenting one beautiful lady.

So there. Have I answered all your tu and vous-related troubles? I hope so.

Quick Recap of this Article

Want more simplified French grammar explanations like this? Check out our French Grammar Mastery Course below.