How to Express Modal Verbs in French 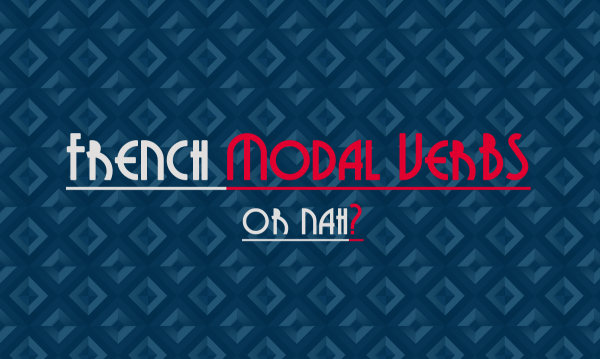 Is it really a problem that French doesn't have modal verbs?  Here in this article, let's take a look at how to express English modal verbs in French.

Quick Navigation
A Quick Background on Modal Verbs
How are English modal verbs expressed in French?
1. Can
2. Could
3.  May/Might
4. Must
5. Shall/will
an advanced level ﻿﻿﻿﻿﻿﻿﻿﻿podcast﻿﻿﻿﻿ to help you master french
6. Should/ought to
7. Would
8. Could have/would have + past participle
Quick recap
a complete step-by-step course ﻿﻿﻿﻿﻿﻿﻿﻿ for advanced level french

A Quick Background on Modal Verbs

In English, modal verbs are non-conjugated verbs, as listed below:

All of them are widely used in daily conversation in English. It seems to be a real headache for English-native learners that this structure does not exist in French. Don’t worry, just take this problem differently, it does not mean that you can’t express ideas using modal verb in French, just that you have to use conjugated verbs.

The more you learn French, the more you will get familiar with the French equivalent of those verbs.

How are English modal verbs expressed in French?

​For most of the cases, can in English is translated into the verb “pouvoir” (present tense) in French. But is that always the best choice? Not sure.

Let’s take a look at these 2 examples to elaborate this:

[Note : For some cases, consider using the future tense of “pouvoir” instead of the present tense.

The term "as soon as I can" is very common in English, therefore you better keep in mind that the French equivalent "aussitôt que" is usually followed by the future tense (rather than the present tense).

​Here again, "could" can cause some confusion in French.

When could refers to a hypothesis, a suggestion, or a request, we translate it by the present conditional of the verb pouvoir.

Example: Could you lend me this book?  Pourrais-tu me prêter ce livre?

When it refers to a single, unique action in the past, the compound past (passé composé) of the verb "pouvoir" should be used:

Example: He could not talk to him. Il n'a pas pu lui parler.

When it refers to a description or habitual action in the past, we should use the imperfect tense of pouvoir

In normal cases, these modal verb can be translated into the French peut-être/se pouvoir (present)

When it is used to express a polite question or to ask permission, you could think about the verb permettre to make it sound more polite

Example: I will go home now, if I may. Je vais rentrer chez moi si vous me le permettez.

Here it is quite straightforward. You could simply use the present tense of the verb devoir.

​These two modal verbs are used to express an idea in the future. So simply use the simple future in French.

The verb devoir in present conditional should fit here.

Example: I should relax a bit. Je devrais me détendre un peu.

Would is nearly similar to "could", so we could have many options. The only difference is that "would" can be placed before any verb, so here of course we are not limited to the verb pouvoir in French.

When it refers to an idea of the future, a hypothesis, or a suggestion, the conditional mood is used.

Example: I would tell you if I knew. Je le dirais si je le savais.

When it refers to a repeated action in the past, the imperfect tense is used

When it refers to a specific action in the past, think about the compound past.

Example: We asked them to give us a little time, they would not do it. Nous leur avons demandé de nous accorder un peu de temps, ils n'ont pas voulu le faire.

8. Could have/would have + past participle

Example: I could have finished it on time. J'aurais pu finir cela à temps.

Now that you know the rules, just try to read as much French text as possible and you will get familiar with how to express English modal verbs in French.