"Am I too old to learn a second language?"

"Is learning another language too expensive? Could I afford it?"

"Do I really need to learn French? I'm already proficient at English."

These--and other legitimate concerns--have been effectively holding back a lot of people who want to pursue learning French.

In fact, so many people think that way that it warranted an entire chapter in my book Fluent in French. 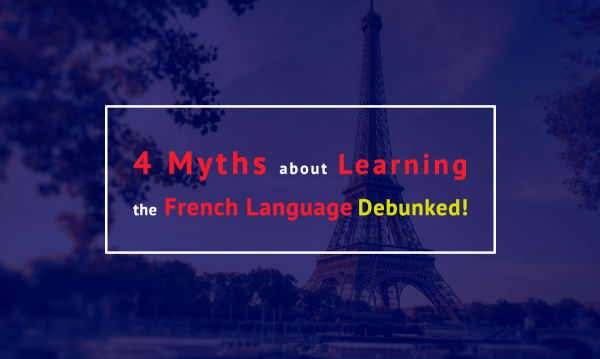 Table of Contents
MYTH #1: Immersion is all you need to learn French.
MYTH #2: You're too old to learn French.
MYTH #3: Learning French is too expensive.
MYTH #4: English – the universal language – is the only thing you need to know.
1. Speaking French will grow your job opportunities and increase your salary potential.
2.  French is a language of culture.
3. Learning French will improve your English and native language.
BONUS MYTH: “French pronunciation is near-impossible for non-native speakers to master. So why bother?”

MYTH #1: Immersion is all you need to learn French.

Sounds like a gloriously heady experience, doesn’t it?  Packing your bags and leaving everything behind to move to Paris.  To sip café au lait at le café Parisienne, munch on croissants, lead la vie de bohème, and picking up a legitimate French accent along the way. And who knows, maybe even a new love, too. <sighs>

Of course, I’m just exaggerating here. Immersion doesn’t have to be exactly like that. But you get my point.

Not everyone can afford to go on an immersion trip to France or to pack up and leave for months – or even years. It sure does sound like stuff out of millennial’s daydreams though. In fact, Buzzfeed listed 30 excellent reasons why you should move to France immediately. But seriously, is moving to France or to any other French-speaking country the only way you can learn to speak French like a native?

Of course not. This is a myth.

But why, you ask? Here are some reasons.

Don’t get me wrong though. Immersion is wonderful and it will help you learn things about the language that you will never learn in a classroom setting. But to say that it is purely what you need to learn speaking French like a native, is not true.

Immersion should be supported with proper language instruction to learn all the aspects of the language, be it reading, writing, listening, and speaking.

A truly effective method to learn French is to combine aspects of both immersion and traditional instruction. But did you know that you can still practice immersion even if you’re living your life on the other side of the globe, a 10 hour-flight away from the nearest French-speaking country?

In this website, I’ve written several articles about how to learn French effectively through creating a daily habit that involves a mix of language learning and culture.

Check out some of the articles and enjoy French culture wherever you may be.

MYTH #2: You're too old to learn French.

Ouch. The age myth. I’ve heard this again and again. For a while, scientists really did think that as you get to the age of 12, it would be difficult for your brain to fully speak a language like a native.

So is it too late for you, for me, for old geezers like us who have been on earth for some time already?

Fortunately not. Several recent studies  suggested that language learning as an adult is quite achievable. In fact, with a good mix of immersion and traditional methods, the adult brain can still absorb a new language and speak it like a native.

There’s no age limit to learning a new language. Millions of people who are deemed “too old” to learn a second language still do. And that’s because they saw this myth for what it is: the excrement of a bull, no less.

But let’s not kid ourselves, of course. There’s no denying that it becomes harder to learn a language the older you are. Heck, even walking or exercising don’t get easier with time. That doesn’t mean it’s impossible to do or that you should stop trying altogether, does it?

One way to even the playing field a little bit is by eliminating the biggest challenge that adults face when learning French – OPPORTUNITY and TIME. As kids, the opportunity to learn another language is integrated into the school curriculum, with all the resources provided as part of a class. For adults, not so much.

Older folks like you and I must be self-motivated and find the time to learn a language independently. Between work, family obligations, endless bills to worry about, and finding time to socialize and unwind, setting a schedule to learn a new language can prove to be quite a challenge.

Try to treat learning French as your gift to yourself; a part of your “me time”.  Any time that you dedicate to learning a new language should be considered a huge achievement, and any progress you make should be celebrated.

So break out a bottle of French wine for every lesson you complete, and remember that learning French is something you’re doing for yourself and you’re keeping your brain active and healthy by learning a new language. So, YAY!

MYTH #3: Learning French is too expensive.

Is it really? The truth is, if you want it to be expensive, then yes, it could definitely be. But if you are on a budget, there are smarter ways to go about language learning. And it all starts in the marvelous, amazingly helpful world wide web.

Take this website, for example. The Talk in French website offers plenty of free resources in our blog.Whether it is tips on how to learn French, grammar resources, vocabulary lists, or culture topics, make sure to check out the archives as well as the latest articles for really useful content.

When you sign up to the newsletter, you’ll get access to a growing list of FREE resources that covers all the aspects of French learning – from pronunciation to grammar, listening, reading, writing, and speaking. There are free audio resources for you to listen, too. Trust me on this: it’s definitely the most generous free French learning package you’ll ever encounter online.

When you follow the social media accounts of Talk in French, you will also gain access to daily vocabulary plus so much more freebies.

Amazing? You bet. Most of these things, say about 90% of the learning materials, are free. No strings attached. But if you want more help with your French, the Talk in French courses got you covered.

Here are more ways on how to learn a new language on a budget:

Rather than short term investments in learning French, it is best to commit to a long term process and creating a daily habit to reach fluency. Slowly but surely, you can do it. At little to no expense.

MYTH #4: English – the universal language – is the only thing you need to know.

So you’re proficient in the English language or a native speaker. That’s cool. You can certainly consider yourself lucky.

English is an extremely useful language to speak and most countries aspire to learn English as their second language. Speaking English gives you a number of travel and employment opportunities across the globe.

But what if I told you that only 5% of the world population actually speak English? The other 95% speak other languages.

Sure, a big chunk of that 95% are probably learning English as their second language which means that English is enough to get by around the world. But speaking English only when you travel to other countries would make you miss so many things.

Speaking French, for example, would open up so many wonderful experiences when you travel to France and other French-speaking countries.

Here are some other advantages of speaking French:

1. Speaking French will grow your job opportunities and increase your salary potential.

Did you know that:

So what do these all mean?

It means that your career potentials will grow leaps and bounds if you add speaking French to your repertoire of skills.

It means that if you are looking at a career in diplomatic services and international relations, French is definitely a useful language to learn.

It also means that speaking French would allow you to tap into the international job pool, opening up myriads of opportunities for you.

2.  French is a language of culture.

https://www.consulfrance-houston.org has this to say:

“French is the international language of cooking, fashion, theatre, the visual arts, dance and architecture.

A knowledge of French offers access to great works of literature, as well as films and songs, in the original French.

3. Learning French will improve your English and native language.

Grammar and syntax all play a huge part in learning a second language. As you begin to understand and dissect these things, you’ll start to pay more attention to how it’s constructed in your native language thereby boosting your own knowledge of your original language.

Same with vocabulary. Around 40-50% of English vocabulary has its roots in French. You’ll realize as you learn French that the more your French improves, the more your proficiency in English will increase.

Learning a foreign language improves your memory and does great things to your brain? Studies have proven that speaking more than one language delays the onset of dementia by an average of 4.5 years.

BONUS MYTH: “French pronunciation is near-impossible for non-native speakers to master. So why bother?”

I must admit. French pronunciation and getting a real legit French accent is truly hard work. But there’s no reason for it to stop you from learning the language. So many others have done it and so can you.  The how’s and how-to’s of getting your French pronunciation in line are all elaborated in the e-book Fluent in French.

The e-book explains in detail how you can resolve language learning issues specifically for the French language and it covers all the scenarios you’ll come across, and provides clear-cut guidance to help you speak French fluently. Fluent in French is available as a bonus in the Beginner, Intermediate, and Advanced French Courses.