A Complete and Easy Guide to French Adjectives

French adjectives can be one of the most colorful parts of speech. But if you think you know enough about adjectives, you can check out this other article that contains the different types of adjectives in French and a huge list of the most common adjectives. 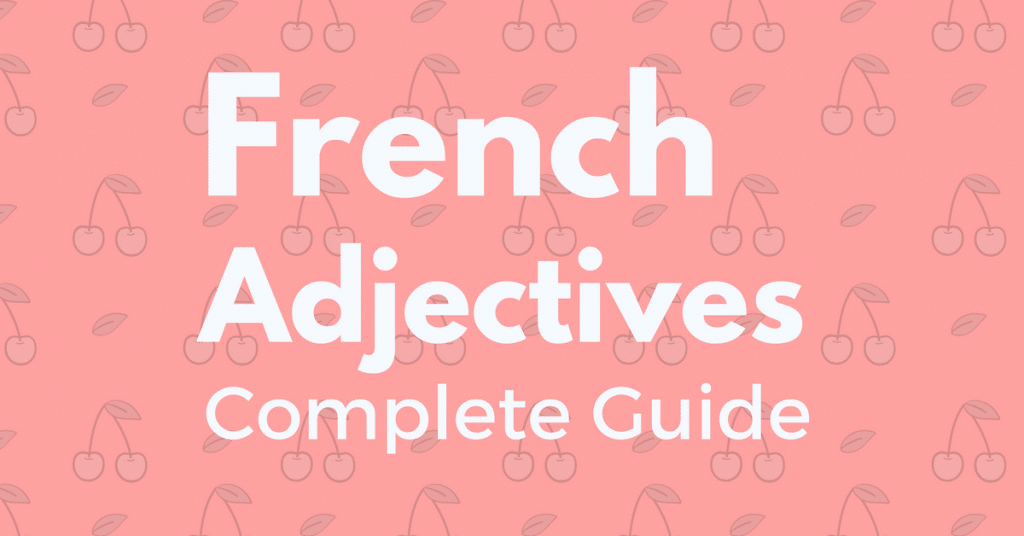 In case you need a little reminder of what adjectives are, here's a quick run-through:

Adjectives are words which are used to describe, identify, modify or quantify a noun. These are descriptive words which tell you more about a person or thing, like what it looks like, how big it is, what color is it, how many are there, and basically any sort of detail about the subject.

No time to read now?

Then click on the big blue button to download the French Learning Package.  You’ll find inside the cliff notes of this article in PDF format .

Here are some examples of adjectives in English:

But why should adjectives be studied anyway?

Aside from the fact that it describes a word and answers the question, “what kind of..?”, it also makes your speech or writing vibrant and exciting. Now who wouldn't want to come off as an interesting speaker, right? Especially for a romantic language like French, inserting the right (fabulous!) descriptions would make a whole lot of difference.

Note: This learning guide is divided into different parts with a quick recap after each topic. You can read the entire article in one seating, or you can choose to digest it in bite-sized, chewable pieces by learning one topic at a time and coming back regularly for the rest of the topics. Your study method is all up to you. The important thing is to enjoy!

While both French and English adjectives operate the same way, there are a few key differences between the two, and these are:

When we use adjectives in English, the only time we change its form is when we compare something.

She is prettier than her sister. Pretty is changed to prettier to compare the subject to another person.

That's the coolest idea ever! Cool becomes coolest to point out the level of awesomeness.

In French, on the other hand, there are a few other considerations aside from comparison. You also have to make your adjectives “agree” with the noun they are describing based on gender and the quantity.

So your French adjectives could be changed into four forms:

Let's use as an example the word joli (which means pretty).

Sounds like a lot of work, eh? Let's just keep going and the knots in your brain will soon be cleared out (trust us!)

The second difference between French and English adjectives is their placement in a sentence. In English, we put the adjectives BEFORE the word they are describing. In French, however, they are usually placed AFTER the noun.

A quick recap of the first topic:

2. HOW TO MAKE FRENCH ADJECTIVES “AGREE”

Having to make words agree with each other could seem headache-inducing to newbies in French. But don't worry, we're here to make the task as easy for you as possible.

Here are the basic rules you should remember when it comes to making adjectives agree.

Let's use the adjective noir (black) as an example.

A closer look at how to make adjectives feminine:

Rule No. 1: Simply add -e to the masculine singular adjective. This applies to most adjectives.

Rule No. 2: In cases where the adjective already ends in -e in its masculine singular form, you no longer need to add another -e at the end.

Rule No. 3: Some adjectives have a more complicated way of changing into its feminine form. But still these are still more or less follow regular patterns, so all you need to do is familiarize yourself with the following table:

This also applies to adjectives where you double the consonant to change them  into their feminine form. For example, in the word gros (big, fat), the s is silent while in its feminine counterpart grosse, the s sound is distinct.

Too many rules? Don't worry, you'll catch up real quick if you keep coming back and reading this page thoroughly

Just like in any other language, there are words which simply refuse to fit the bill. Here is a list of some of the irregular adjectives in the French language:

Now that we have finished with the basic rules on how to make adjectives agree, as well as how to change them to their feminine forms, let's look at

How to make them adjective plural in French.

As mentioned earlier, French adjectives change in two ways – the gender, and the quantity. If you found the previous topic a bit difficult to grasp (you'll get the hang of it, don't worry!), this one is a lot easier.

Here are the basic rules on how to change a singular French adjective into its plural form.

Quick tip: In cases where the adjective is describing both masculine and feminine objects, use the masculine plural form (instead of the feminine).

Pronunciation guide: When you add -s or -x in an adjective, the pronunciation remains the same! But when it comes before a word that starts with a vowel or h, the s or x is pronounced.

And finally, let's move on to the best kind of adjectives there is --- the ones that NEVER change no matter what form is used. Now if only all adjectives were like these, it would be one less headache to worry about, right?

Sadly, there's quite a few of them. These adjectives are usually about colors such as bleu marine (navy blue), orange (orange), and marron (brown).

A quick recap of the second topic:

More short but complete grammar lessons in these e-books! Get both today at a huge discount!

3. WHERE TO PLACE FRENCH ADJECTIVES IN A SENTENCE

As mentioned in the previous topics, one of the key differences between French and English adjectives is their placement in a sentence. While English adjectives tend to come BEFORE the noun they are describing, the French adjectifs usually come AFTER the word they describe. However some words simply refuse to fit the norm and make their own rules instead.

Here we'll discuss the rules on where and how to put the adjectives in a sentence.

The most important rules for you to take note of are the following:

3. Aside from the adjectives that appear after or before the word they are describing, there is also a special group of adjectives that could appear either BEFORE or AFTER a noun, and their meaning changes depending on their placement in the sentence.

Here are some of the most common examples:

4. Lastly, there is also a small group of adjectives which can be placed before or after a noun and their meanings do not change.

These rule-breakers are the following:

Extra tip: All these rules might be a bit confusing, but if you keep familiarizing yourself with the usage of  the different words and adjectives through continuous exposure to the French language, it can only get easier for you. Remember, constant practice and a lot of patience is the key. You're doing awesome though;  keep it up!

In English, using multiple adjectives to describe one subject is quite simple: you just pile them up in a neat line based on an agreed order.

But since French has a lot more rules when it comes to the order of adjectives, the question is, how do you arrange multiple adjectives in a sentence?

Here are some tips:

1. If one of the adjectives you're using normally goes before a noun while the other one comes after the noun, then you can proceed with doing just that.

2. If both of the adjectives you are using come after the noun, you can add et (which means and) between the two adjectives. un homme mince et laid (a thin, ugly man)une personne intelligente et drôle (an intelligent, funny person) Sounds simple enough, right?

A quick recap of the third topic:

There are four kinds of adjectives in French based on where they appear in a sentence:

Before we end our discussion on adjectives, let's practice saying a few French adjectives first.  The meanings are also included, and this list should help widen your French vocabulary. Ready?

These so-called adjectives are technically not adjectives at all, and are in fact, just a regular use of the functions of numbers and mathematics. But because they act like adjectives themselves in the way they describe or tell details about the nouns, they are often included in French lessons as adjectives.

If you are already familiar with French numbers, this should be a breeze to you. If not, you may want to brush up on your numbers by heading over to the article  The Easy Guide to French Numbers.  There are three kinds of numerical adjectives, and these are:

With all that classification out of the way, the question now is this: Where do you put a numerical adjective in a sentence?In the previous lesson, we discussed that adjectives usually appear AFTER the noun they are describing. But in some cases, they could also appear BEFORE, BEFORE or AFTER depending on the meaning, and BEFORE or AFTER with no changes in the meaning. For numerical adjectives, the rule is: they come BEFORE the noun that they modify.

The next question that begs to be answered is: Like other adjectives, do numerical adjectives need to “agree” with the nouns they describe? Fortunately for French-learners like you, this is one area where there are no difficult rules of agreement think about. The rule is very simple:

As previously mentioned, numerical adjectives are quite easy to understand if you already have a grasp of French numbers. They don't have as many rules as the other regular adjectives do.

With that, we conclude this lesson on French adjectives. Remember, the key to grasping these lessons is repetition Do not forget to keep coming back to this page and reviewing what you have learned until you have thoroughly familiarized the topics as well as the different rules.

I am confident that this French adjectives list masculine and feminine and plural variations will help learning to speak French easier!

Here are some FAQs about French Adjectives

Where do adjectives go in French?

Which adjectives go before the nouns in French?

Some common examples of adjectives that go before the noun include:

What are some positive French adjectives?

When looking to describe something or someone in a positive manner, here are a few French adjectives we can use:

What are the 4 rules for adjectives in French?

The 4 rules for adjectives in French are: