A Guide to French Colours

Do you need to know how to describe something in more detail than big or small? Learn how to say the different colours in French and use them in normal sentences and scenarios. 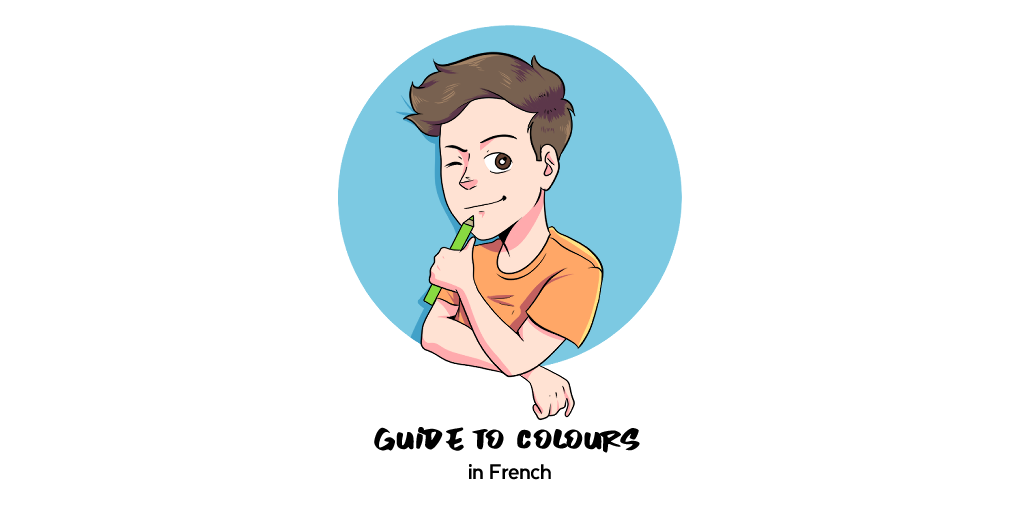 The Importance of Colours in the French Language

Knowing how to say the different colours in French will come in handy for many different reasons.

Colours are something that we learn very early in our lives, as they can be used to describe a lot of different things. So, les couleurs (the colours) should be some of the first words you learn in any language.

The use of colour in idiomatic phrases is something we do without noticing because it is  so deeply ingrained into our spoken language. For example, we use the phrase “seeing red” when talking about someone being angry, or “having a visit from the green-eyed monster” when talking about jealousy.

Imagine being able to incorporate such natural sayings into your repertoire of French phrases, and how much it will boost your language skills and make you sound more like a fluent French speaker.

Colours are generally used as adjectives, so following the French rule, the adjective must have the same gender and singular or plural agreement as the noun it is describing.  For example, if the noun that a colour is describing is feminine, then la couleur (the colour) will change to match it.

As an adjective, the colour will go after the noun, with the only exception being for poetry. For example the line “Je ne regarderai ni l’or du soir qui tombe” meaning “I will neither see the golden glow of the falling evening” from the poem Demain, dès l'aube by Victor Hugo. If you are interested in seeing the full poem or four more, these can be found in this article.

For example, when describing a green dress, la robe (dress in English) is feminine, so green, or vert, becomes verte. Therefore, “the green dress” in French is “la robe verte.” If it’s plural, “the green dresses” becomes “les robes vertes.”

There are three primary colours from which all other colours are formed, so they’re a good place to start when learning colours. Once you know the words for these three colours, you can move on to the others.

Rouge is used to mean red. It is also associated with the verb rougir, meaning “to turn red,” which can be used to describe someone blushing.

Jaune is used to mean yellow. For those learners who follow the Tour de France you may recognise the colour because of the yellow jersey (maillot jaune) that the leader wears.

Bleu means blue. Un bleu in French also means a bruise, which could be due to the fact that les bleus is a phrase that people use to refer to the French national sports teams.

Other Colours in French

So now that you know les couleurs primaires, you can start to learn the other colours that will help you to build more descriptive sentences in French.

Orange is probably the easiest colour for you to learn, as it’s the exact same word in English. Still, it is important to remember that the pronunciation is different. Orange is one of the two colours that doesn’t have a feminine and masculine form, so it doesn’t change depending on the noun’s gender being used with it.

Noir, or noire in its feminine form, is black in English. Noir can also be used to mean “gloomy”.

Gris means grey.  Or, if you use this colour to describe a feminine noun, the feminine grey is grise.

Marron means brown. Marron is the second colour, after orange, that doesn’t change its spelling regardless of the noun’s gender that precedes it.

Rose means pink. La Vie en Rose is a very well-known song by Edith Piaf which talks about finding love. This colour is another that doesn’t change depending on the noun, but whether it is plural.

Violet means purple. The feminine version of this colour is violette.

Like English, there are adjectives that are used in conjunction with the colours, which add even more description to the appearance of an object.

Fade means “faded” or “washed out”.

Âtre is a suffix that is used “-ish”. This word is usually used in French poetry.

Using these words in your sentences will help with your descriptions and make them seem even more natural.

Bruns is used for brunette hair. This is fairly simple to remember as bruns is like a shortened version of brunette.

Roux is used to talk about red hair. When using roux in relation to red hair, an easy way to remember it is to link it to the colour rouge, which is “red” in English.

Finally, black and grey hair are referred to simply by their colour names, noir and gris. When talking about dyed hair, you would say “colorés en” (coloured in), then the colour that they have dyed it in.

As mentioned at the beginning, there are phrases that use colours to paint an image in the mind. Here are a few that you might recognise or hear being said:

Être rouge comme une tomate means “to be as red as a tomato” and is used in reference to be blushing or being sunburnt. Although, for blushing you can also use the verb “rougir.”

Être dans le rouge means “to be in the red,” which means that you are struggling financially.

Être vert means “to be furious.”

Avoir le feu vert is used to say that you “have the go-ahead/green light.”

Être vert de jalousie means “to be green with jealousy.”

Noir sur blanc is a phrase used when something is undeniable. It literally  means “it’s written there in black and white.”

Être gris/grise means “to be tipsy” or “slightly drunk.”

As you can see, some phrases are similar to certain sayings we have in English, and it is easy to work out the translation simply from the words in the phrase.

Learning how to say the different colours is one of the first things most children are taught when they are learning to speak. So, if you are teaching your child to talk in French and would like some more words for them to learn, check out this article.

There are so many different sayings that use colours, the list above is not exhaustive, but they are the ones that you are most likely to hear or say in conversation. If you are interested in other common expressions, you can take a look at 14 French Expressions to Practice Today.

There is also a little bit of history behind the colours used in the French flag, or la tricolore, which is red, blue and white. This is because red and blue were the colours of Paris and white was that of the Royal House of Bourbon and were chosen to create unity after the revolution in 1789.

Colours are used so frequently in everyday conversations, that they are an important part of any language. So, once you have learnt the different colours in French and the rules on how to use them in a sentence, then you will be able to form longer and more descriptive sentences. You can also understand more complex colour-related phrases used in the French language.