Every language has its own share of bad words and French is no different. Today, we’ll be taking a look at some of the commonly used French curse words (les gros mots) – and no, it’s not just “merde!” There’s plenty more French swear words where that came from. 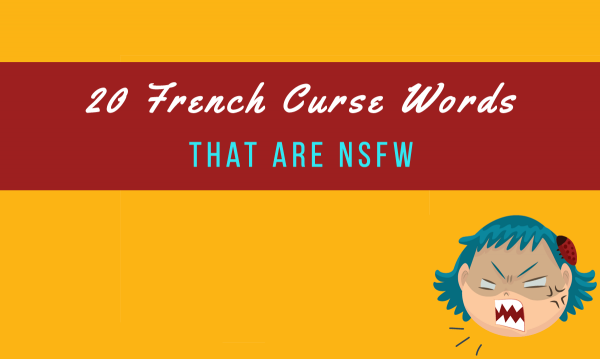 Why should you learn how to swear in French?

Aside from the fact that swearing is an everyday habit for a lot of people and has been reported to reduce stress and pain levels, some moments are just so horrible that they can only be fully expressed by a swear word or two (or more).

Learning how to curse in French will also allow you to mask your obscenities and even make them sound more elegant than their actual meaning. That was why the phrase “pardon my French” was invented in the first place. Besides, it’s not just a matter of being able to say these words yourself – it’s only fair that you should know when someone is cursing you out in French, too!

Take this short clip from The Matrix for example where the character simply known as The Merovingian was extolling the virtues of cursing in French.

Before we drop the merde bombs all over this article, remember that this post is intended only for those who are not easily offended and can tolerate hearing (or reading) some offensive terms every now and then. Otherwise, please turn back now while it’s still safe or you can check out these funny idioms instead.

Level 1 French curse words: Swear words that are somewhat acceptable for use around selected people. Some of it can be pretty offensive. You can, however, use these jokingly among your good friends.

Level 2 French curse words: Extremely vulgar and offensive; the type that you need to hide your kids, wife, and husband from, because these aren’t your regular insults. Use very sparingly with extreme caution and only in the right context and situation.

Now that I have said all the possible disclaimers I can say: let’s start, shall we?

Hands down the most popular French swear word, this one is pretty common. In "Les Miserables," one of Napoleon’s generals, a Frenchman named Cambronne, uttered a defiant “merde!” when his troops were outnumbered in Waterloo. And just like that, merde became known as le mot de Cambronne – the ultimate French curse word.

You can use it on its own, for when you’re exasperated. For more feeling, the French sometimes say “merde alors.”

Just like how English speakers use the expression “shit,” merde can appear in different usages.

Zut which is more common than the old-fashioned “zut alors” is actually just a very polite way to say merde.  It’s like saying “shucks” or “dang” to avoid swearing in front of people you shouldn’t swear in front of. So feel free to use this one as it won’t get you into any trouble at all.

What’s the cow got to do with it, you say? No one knows or cares, especially since no cows were harmed in the making of this expression. You can exclaim “oh la vache!” the way you use holy cow – as a form of disbelief, surprise, shock, pain, and similar instances.

Another popular one, you can use this to express shock or anger over something.

Putain is essentially a very harsh and impolite way to call someone a whore, but it can be used in the same manner as you would use "f*ck" in English. You can start your sentence with it, add it towards the end or use it as different parts of speech; it’s pretty flexible.

You can even combine it with merde and say "putain de merde!" ("f*cking shit" or literally “whore of shit”) for maximum impact.  Just make sure you know when it’s socially acceptable to do so (very rarely and only among friends).

While the translation may seem harmless to you, this expression is actually more insulting than it sounds. So use only when you’re really, extremely pissed off.

Another way to exclaim to the world how annoyed you are is to scream "ça me saoûle" – with feelings. Although commonly used by teens, this expression doesn’t have an age limit, so anyone beyond their teens can use it to express how annoyingly awful a situation is.

An old fashioned way to say something similar to “good grief!”, “good heavens!”, or “for heaven’s sake!” You’ll hear this uttered by angry grandfolks who are exasperated with the young ones.

Naze is basically “zero” but could also mean “useless” depending on the context. For example, “pauvre naze” is said about a useless person, and you can also say “je suis naze” when you’re super tired. For purposes of swearing, you can say “c’est naze” to say something is shitty or it sucks big time.

Cul is pretty flexible and can be used on its own or creatively in a number of ways. Like when you’re fed up (j'en ai ral le cul) or you want someone to suck it up and stop complaining (tu l’as dans le cul) plus various other situations.

This one is quite self-explanatory. You say this when looking at someone’s face bugs you big time and you just want him (or her) gone from your sight.

You can be sure that the translation for these words refer to some vulgar body parts and name-calling. But it could also be used to mean idiot. Other usage of con are “c’est con” (that’s dumb/idiotic), “gros con” (a big idiot) or “t’es con” (you’re an idiot).

This one is related to the previous entry (number 13) and can be used in about the same way as “this is bullshit.” If you feel that the situation you’re in feels like a load of shit, feel free to pull out this expression and mutter it (silently) to yourself.

Similar to crétin (cretin) or imbécile (fool), this is one of those things you say when you really need to do some name-calling. Again, use with caution.

If you know you are going to get offended but you’re still here reading this part, please leave now and check out my podcast, perhaps?

Now, I want you to understand that by sharing these terms with you, I am trusting you to be wise enough to reserve these for moments when nothing less than extreme profanity would do. This part here is virtually cordoned off with virtual glass which you should only break during emergencies. Warning: this is not for the faint of heart!

Salope can be translated to something along the lines of “c*nt,” while salaud is its masculine counterpart.

More like a rude version of “get lost” or “bugger off," this expression became controversial in recent years when it was uttered by no less than French President Sarkozy at a citizen who declined his handshake. If it can get a president in hot water, it sure can get you in trouble, too – especially when used with other swear words like con.

There can never be a graceful way of calling someone’s mother some awful names, so this one ranks high in the list of obscenities.

Shut up may not seem like a very offensive thing to say but trust me, its French counterpart is very much so. You can even kick it up a notch and say “ferme ta gueule!” which works in the same manner as “shut the f*ck up”...on steroids.

Ta mère is “your mom.” And nique is a really vulgar verb, so put two and two together and you get the mothership of vulgar cuss words. ’Nuff said.

French curse words and swearing in French in general, can be difficult to pull off. Not only do you need to be extra cautious not to offend anyone if you don't mean to, you also have to use it in exactly the right context. Plus there are the cultural differences and taboos you have to consider.

That’s why in our French Vocabulary Mastery Course, we’ve made sure that you’ll know if you should be using a colloquial term.

The slang terms and expressions are marked with special annotations to let you know if a term is popular and can be used any time, or if it’s offensive and to be used selectively. It comes with audio for pronunciation help, too!

Find out more about this course below.

“Sacrébleu” is probably the most stereotypical swear word people use when trying to sound French, and it’s often spelled wrong as "sacre bleu". But you won’t hear French natives say this anymore; only foreigners use this nowadays. The original word is sacré Dieu or “sacred God” which was considered blasphemous, so it eventually became sacrébleu.

Do you have any other French swear words you would like to add? Let me know in the comments section. 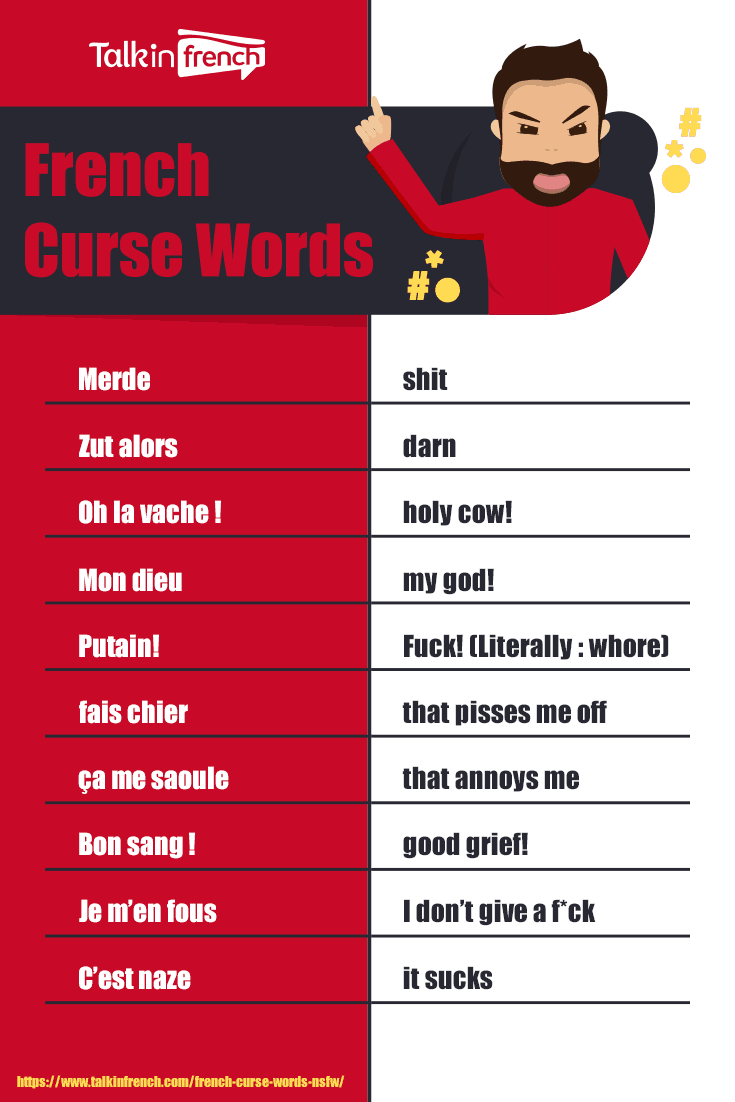 Here are some FAQs about French Swear Words

How do you say “fuck you” in French?

What are swear words in French?

Here are some French swear words: