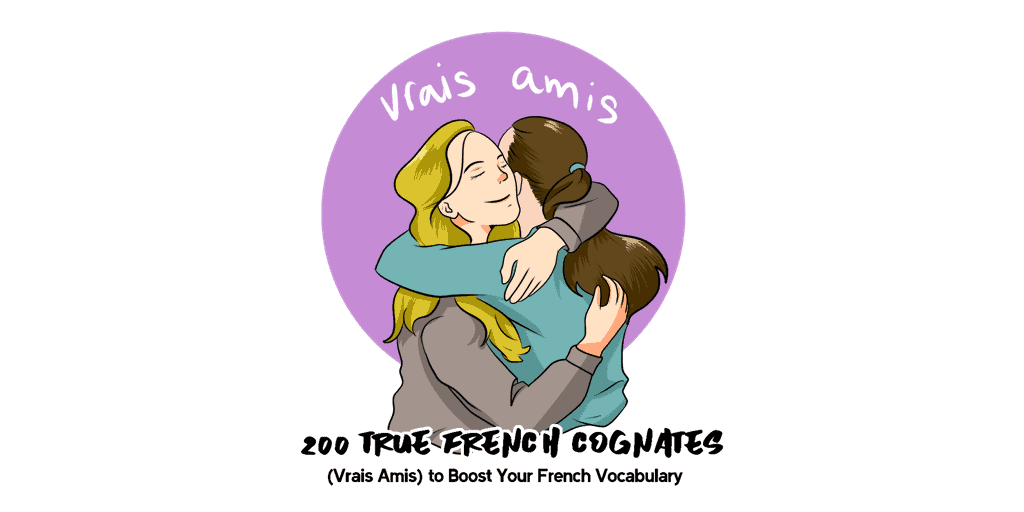 If English is your first language, chances are you’ve been using French your entire life. And we’re not talking about common phrases such as déjà vu and au revoir – we’re referring to actual words in both languages with the same spelling and meaning!

There are approximately 1,700 French cognates, many of which are identical to their English counterparts. We’ve put together a list of the 200 most common true French Cognates called Vrais Amis.

Brief History of French and English

So how did English and French come to share so many of the same words and even language concepts? The history of the two languages dates back to 1066 with an invasion into England.

William the Conqueror invaded England, known as the Norman conquest. Many traditions came along with them, including the French language. French became an official language for education, politics, and administration.

The joint Anglo-Norman language remained prominently used even after the era of the Norman presence in England.

Fast-forward many centuries to today, and the French language introduced back then transitioned into common words in Modern English.

It’s common to feel overwhelmed when starting to learn a new language – French is no exception. French has its own words, pronunciations, usage, sentence structures, grammar, and more than differentiate it from other languages.

Studying French Cognates helps ease the culture shock of the new language. Did you know that 30% of all the words in English are derived from French? And with a massive list of cognates, you’ll discover that you already have a substantial French vocabulary even before starting your first lesson.

You may even notice some patterns of the common words to give insight to other word origins and pronunciations as you expand your French vocabulary.

For example, many of the French cognates share the following endings:

Keep these in mind when going through our French cognate list.

Before we get into the list, let’s first take a look at the different types of French cognates.

The truest form of French Cognate is called Vrais Amis, or “true friends.” These words share identical spellings and meanings in both English and French.

The only difference for true cognates is the French pronunciation. Some of the words may include an accent. True cognates make it easy to read and understand French, but it may take some practice to say the words aloud like a native French-speaker.

One of the most common example is pork (en) vs. porc (fr). In English, pork refers to the meat of a pig, but in French, “porc” can also translate to pig. Since it’s a French cognate, you’ll have a general understanding of what the word is referring to, but be careful about how you use them in the French context.

You can’t have vrais amis without faux amis, or false cognates. These words have similar spellings in English and French, but very different meanings.

For example, grape (en) vs. grappe (fr). Grape refers to the fruit, while grappe translates to “bunch,” such as having a bunch of grapes. You can use grappe when talking about a bunch of anything, so it has nothing to do with grapes or even food.

See below for a list of 200 of the most common true French cognates. We focused strictly on words that have the exact same meaning and spelling.

*There are lots of other cognates that have slightly different spellings but were excluded from the list.

Now that you have a great list to kick off your French vocabulary, let us know in the comments below which words you’re most surprised about.