A Simple, No-Fail Guide to French Contractions | Talk in French 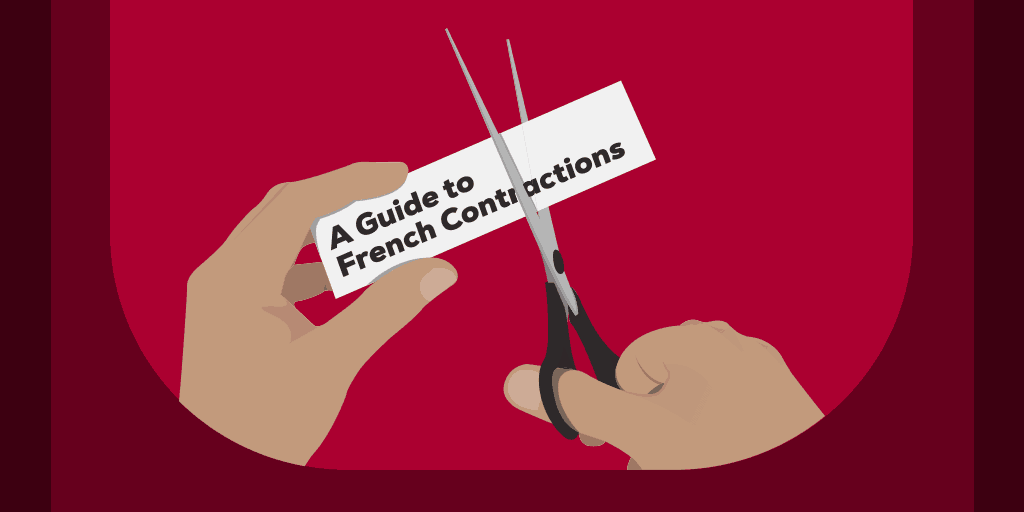 French words often appear with contractions. But unlike in English where you can choose to say “I am” instead of “I’m” or “you’d” instead of “you would” depending on the formality of your tone, in French you have no choice about it. You see, French contractions are mandatory. If the words call for a contraction, you contract it. There’s simply no other way.

But what are the kind of French words that need contractions? And when should you use them?

Here in this article, let’s learn all about French contractions and see how we can simplify the rules to make it as easy for you to remember as possible.

Quick Navigation
What are French contractions?
What French words need contractions?
Contractions in Informal French
Scenarios when you should not contract
Quick Recap
Conclusion

Before we jump into the meat of this lesson, first, let’s ask ourselves:

What are French contractions?

French contractions are two or more words combined together where a letter (or more) is removed. The omitted letter is often replaced with an apostrophe.  You see it in common French phrases: je t’aime, c’est la vie, je m’appelle…and so many others. But perhaps you’ve wondered if there are rules behind it?

The good news: Yes there are guiding rules on French contractions! And, yes, we’ll discuss them shortly.

Here are the French words that you need to remember when it comes to French contractions.

When le and la are followed by a vowel, h muet (silent h), or the pronoun y, the vowel in le and la are omitted and they are lumped in together with the second word.

When these nine single consonant words that end in silent e are followed by a word that begins with a vowel, silent h, or the pronoun y, the silent e are dropped and the two words are contracted.

3. The French conjunctions puisque and lorsque

These two conjunctions which mean since / because / as (puisque) and when / while / as soon as (lorsque) becomes shortened into the following:

4. The French preposition or adverb jusque

Jusque means until or too, and this word is also contracted when it is followed by a word that begins with a vowel.

Still with me so far?

A contraction will be formed when these two common French prepositions are followed by the definite articles le and les.

1.When la and l’ follows  à and de, there are no contractions. This means:

2. When le and les are used as object pronouns instead of definite articles, there are no contractions.

À and de also contract with the different forms of lequel (which one).

When laquelle follows à and de, there are no contractions. This means:

There are some words that are always contracted. It’s just the way they are. Here are some of them:

Let’s back up to what I said earlier in the first paragraph. I mentioned that unlike English where you have a choice to contract when you speak informal English, it’s not the same with French. But actually, there’s a tad bit of similarity here, too.

Language is a growing, changing thing and it adapts to new manners of usage. And yes---like in English, there are instances when you contract words when speaking informally.

Let’s take a look at sample scenarios below.

In informal French, ‘tu’ when followed by a verb that begins with a vowel will be shortened to t’. The most common way to do this is with tu as and tu es which become t’as and t’es.

This is a highly informal contraction and only appears in casual spoken conversations among friends. It NEVER appears in written texts such as newspapers, write ups, or other written materials, unless of course it happens to be a text message (SMS) between friends.

Also in informal French conversations, people take liberties in shortening some words and pronunciations. Here are some of them:

But once again, these are highly informal usages. You don’t need to follow these manner of speaking unless you really want to sound as authentic and naturally French as possible.

Scenarios when you should not contract

Of course, there will always be cases when even though you think you should contract, you just shouldn’t (yep, it sucks like that).

Here’s when you shouldn’t contract:

So there you go with everything you need to know about French contractions. It’s not so bad, is it? Feel free to review this lesson anytime you want. And if you have some questions about it, don’t hesitate to let me know in the comments section.