Common Mistakes Made by English Speakers in French

Common Mistakes Made by English Speakers in French 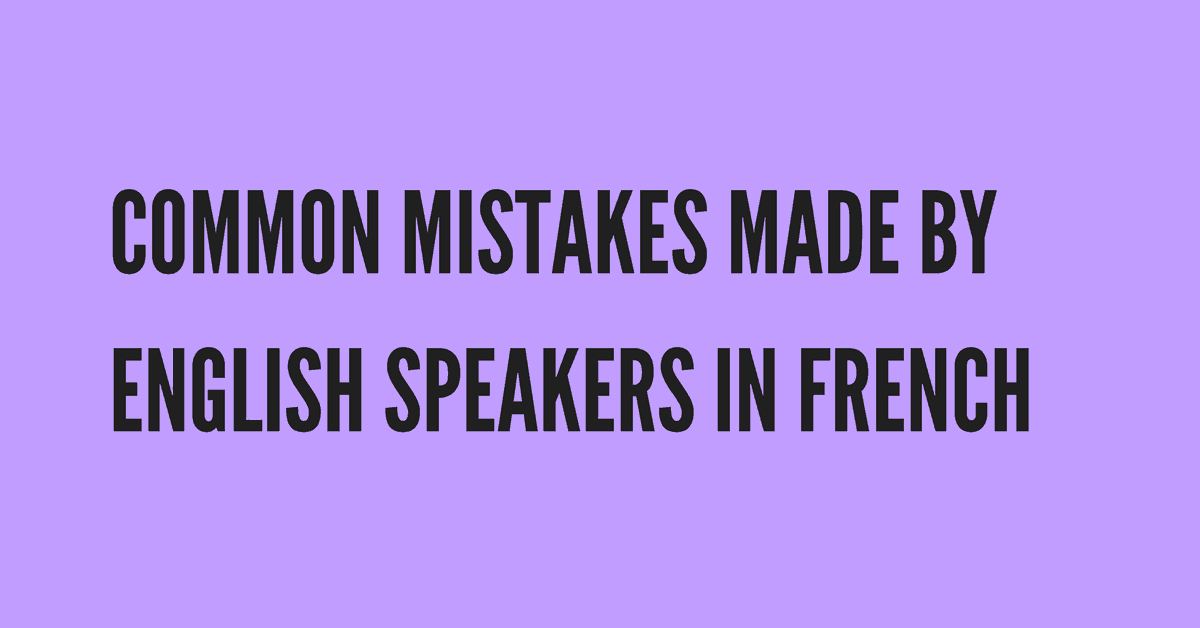 French and English have some vocabulary in common and share grammatical similarities, but they are undoubtedly different languages. So it is quite normal for French speakers to make mistakes in English and vice versa.

Do you chuckle whenever you hear a French native pronounce English words without an “h”, or when they add an “s” after an adjective to mark the plural?

Ok, you're so correct in your language, but do remember the French proverb "rira bien qui rira le dernier" (he who laughs last laughs longest). If you really want to be "the one who laughs last", be careful to not make mistakes when it's your turn to speak French.

Perhaps reading this article is a good start.

This is a confusing but also interesting verb. Some of you are starting to say "What's confusing about this verb, isn't that a simple 1st group verb?". Ok, you're right, but I'm not talking about the conjugation. Knowing that the usual translation of "manquer" is "miss", let's translate this sentence:

If you are doing a word-by-word translation, you will have:

The right sentence should be Tu me manques.

Contrary to English, in French, the one who is missed is the subject, and the one who misses (the other one) is the object. Actually the construction is "A manques à B" / "A is missing to B".

But in short, all you need to remember is that when you are missing someone else, he/she is probably more important than you, so he/she should be the subject, and not you .

You probably know about the contraction of some words in French before a vowel. For example:

You also know that the "h" in French is not pronounced. For example "hiver" (winter) is pronounced "iver"

But, whether  the "h" acts as a vowel or a consonant, or in other words, whether you have to use a contraction before a word starting with an "h" is not a simple problem for foreigners learning French. Actually both cases could be true:

Sometimes the "h", usually in words that are borrowed from other languages, acts as a consonant, so you cannot use contraction with those words. These are called "h aspiré" (aspired h).  Some examples are given below:

Note: a "h aspiré" only means that you cannot use contraction for this word, it does definitely not mean that you should pronounce this word. "Hamburger" in French is pronounced "amburger"

This is a small grammar point, but a very common mistake.

Let's take a look at this sentence:

"amie" has an "e", so the speaker is talking about a woman. The word "ma" is used for feminine noun, so all seems to be correct here. However, it doesn't sound very good to a French ear, so we use "mon" instead.

Similar to the use of "a" and "an" in English, French does not accept a vowel at the end of a word that precedes another vowel that starts the next word (.eg ma amie). So in that case, think about either contraction or a change in spelling.

In English, most adjectives are placed before the noun (with a very few exceptions), but in French it is not this simple and it can cause confusion for English speaking learners. Let's take a look at this problem:

Rule 1:  In general, the adjective in French is placed after the noun it modifies.

Exception 1:  Some adjectives are placed before the noun it modifies:

Exception 2: Some adjectives can be placed both before and after the noun, and have different meanings when placed in different positions:

In general, French adjectives are placed after the noun. But there are exceptions, so when you read a French text and find an adjective that precedes the noun it modifies, try to memorize it and understand its meaning. Reading French texts with  as much attention as possible is the best way to improve your French and therefore avoid this type of mistake

What about you? What mistakes do you make over and over again in French? Let us know in the comments!

To avoid making these mistakes, check out our French Grammar Mastery Course below.

Previous Post 29 French Movies to Watch: One Per Day (February Edition) Next Post 10 French Festivals You’ll Want to Experience in Your Lifetime