French movie culture is full of emotional and funny films, and are overflowing with cult one-liners---amazingly crafted pieces of dialogue that still look killer today and would sound great to quote in conversations. 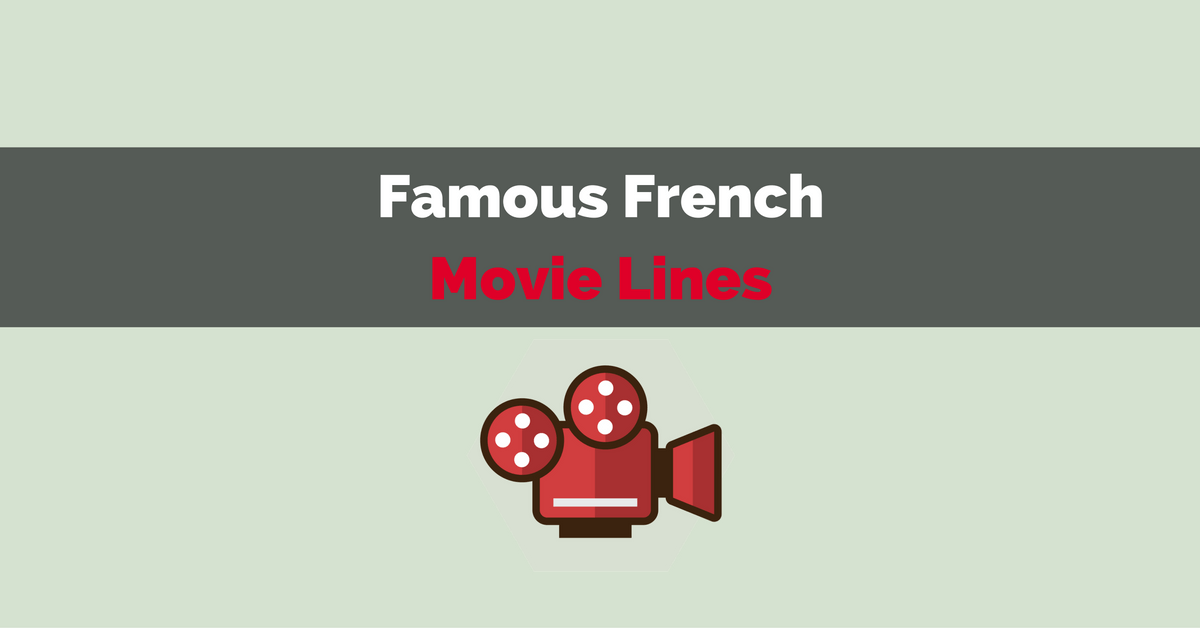 Let's list those gems to show off your French 7th art skills, with a mix of timeless classics and comedy movies that are full of these one-liners!

The film: based on a book by Louis Pergaud, the film is about two rival kids gangs whose playful combats escalate into violence. The title comes from the "war trophies" consisting in buttons cut off from the rival team. The one-liner that made history was not in the original book, and is uttered in frustration by Petit Gibus. It's very well known because of it's incorrect grammar (the correct form should be: si j'avais su je ne serais pas venu") and is still used today when you have made a decision you regret!<

"If I woulda known, I wouldn'ta come!

Make sure to grab your FREE e-book 365 Days of French Movies! Click the photo below to get your copy! 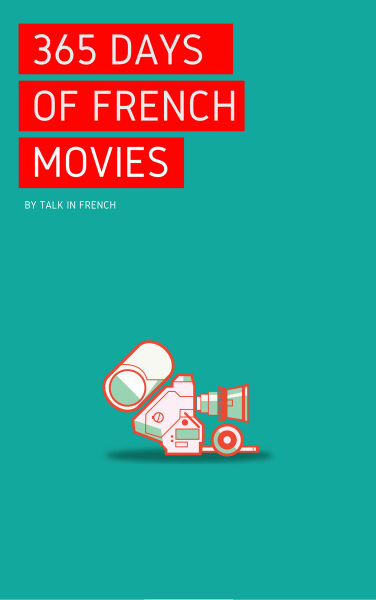 The film: the French Fried Vacation franchise acquired instant cult status (selling 2.2 million tickets on its initial release), with the Splendid group of actors Josiane Balasko, Michel Blanc, Marie-Anne Chazel, Gérard Jugnot, Thierry Lhermitte and Christian Clavier which you will hear utter many of the one-liners in this article. This film franchise directed by Patrice Leconte started in 1978 by satirizing life at holiday resorts such as Club Med.

In this second opus, the group is now in vacation in a ski resort and Jean-Claude Duss, Michel Blanc character is still as lousy with women as he was in the film film, hence this one-liner, who can be re-used in any situation:

So if you'll allow me to give you a piece of advice, it's: "Forget you have zero chance, go ahead, do it. You never know, on a misunderstanding, it could work."

The film: another comedy play by the Splendid troupe and directed by Jean-Marie Poiré, and also a classic comedy French film with loads of one-liners. It's about Pierre (Thierry Lhermitte) and his naive colleague Thérèse, who are working as volunteers for a telephone helpline for suicidal people and are both stuck for the Christmas shift.

Because the lift is out of order, they are visited by a number of unwanted guests, including Katia, a depressed tranvestite, M. Preskovic who always come in with disgusting types of appetizers to offer, or Josette running away from Felix, her violent husband who works as a Santa Claud during holiday season (hence the title of the film).

"Listen Thérèse. I don't like to be mean to people, but she's a nice girl indeed."

The film: in this comedy by Jean-Marie Poiré, a 12th-century knight Godefroy de Montmiral and his servant “Jacqouille” are accidentally travelling through time to the end of the 20th century where their strange habits clash with modern society, and hilarity ensues. It was number 1 in the French box office in 1993, prompted two sequels and an american remake, and remains the fifth highest grossing French film ever.

Here again, the antics of Christian Clavier (the infamous Jacqouille) are a source for countless one-liner, and I chose this one, where he meets Ginette the Tramp.

“Thanks, wench. You're real ugly but ya're sweet.

- Well look atcha nose! When you blow it, dotcha 'ave the feeling dat you're shakin' a pal's hand?”

The film: this cult gangster movie, also known in English as Monsieur Gangster is well-known for its kitchen scenes where those gangster sit around playing cards, drinking hard liquor and firing one-liners non-stop. Just as gangsters do in real life (probably).

It's so full of hilarious one-liners I had to choose just one for this article, but it's the one my family quotes time and time again (50 years after the movie came out) and it's pronounced by the dashing Lino Ventura.

- Idiots would dare everything, that's how you know they are."

Talking about "cons" (idiots), this film by Francis Veber, was adapted from the play by the same author, and nominated for six César awards (it got three). It's full of one-liners from "the idiot" Jacques Villeret, who got a César award for his performance! In the movie, Pierre Brochant attends a weekly "idiots' dinner where guests bring along an "idiot" (a "con" in French) that the others can ridicule.

Brochant manages to find a "gem", François Pignon, but is hit with dorsalgia. He is going have to rely on Pignon to solve his problems by making a series of phonecalls to try and locate his wife. Pignon gaffes every time, accidentally revealing the existence of his mistress to his wife, inviting a tax inspector into the hero's house (who is a tax cheater), or rekindling his relationship with his old friend Juste Leblanc.

"His name is Just Leblanc.

- Really? He doesn't have a first name then?

The film: this Alexander Korda film is based from Marcel Pagnol's plays, and is part of the "Marius trilogy" and had two sequels, César (Marius's father) and Fanny (Marius' ex fiancee).

In this film, mostly taking place in César's waterfront bar, Marius is trying to determine if he is going to confess his love for Fanny, his childhood friend, who sells cockles just outside the bar. In this extract, they are playing an epic card game in which César is trying to make his partner understand, through gestures, signs and this one-liner, that his opponent doesn't have any heart cards any more.

You are breaking my heart... My heart is being broken by you!

The film: also known as Le film de Les Nuls ("the Les Nuls Movie"), this 1994 comedy film was collectively written by and starring Chantal Lauby, Alain Chabat and Dominique Farrugia of the comedy group Les Nuls and directed by Alain Berbérian. It parodies bug budget American films (like Pretty Woman, The Terminator or Basic Instinct which are firectly spoofed) and pretty much relies on puns and visual wordplay, so it makes it quite difficult to understand for non-French Speakers.

This is a film that defined a generation, and you can still find today hundreds of French people who can quote it back to back. It has dozens of famous French movie quotes, but I chose the one parodying the French accent, since the cultest of them all is kind of naughty (look for "Vous voulez un Whisky?" for yourselves, you'll see what i'm talking about):

The film: this film noir directed by Marcel Carné and starring Jean Gabin and Michèle Morgan was based on a Jacques Prévert screenplay and a movie by Pierre Mac Orlan. It's about an army deserter (Jean Gabin) who catches a ride to the port city or Le Havre on a foggy night (hence the title...) and ends up meeting the young escapee Nelly (Michèle Morgan) in a lonely bar on the far edge of town.

They are going to fall in love and plan to escape to Venezuela. So cult one-liners are not only found in comedy films, because French people are not only funny, but also romantic. It's a film noir after all, so it may not go as planned!

-You have beautiful eyes, you know... Kiss me.

The film: to finish with, I'll give you the one-liner that sums up in itself the Parisian gouaille, its cheekiness and wit. This one liner is one of the most famous lines in French cinema, particularly thanks to the very distinct Arletty accent and intonation. This dramatic film directed by Marcel Carmé, and adapted from a loose collection of sentimental tales about simple people residing in a hotel.

This sentence is uttered by Raymonde, played by Arletty, a prostitute talking to her crook (Louis Jouvet). He wants to get away from her to go fishing in La Varenne, and she doesn't like it at all...

“- I need to change atmosphere, and my atmosphere is you.

If you want to carry on expanding your knowledge on cult quotations, here’s an additional list of honorable mentions that were also huge successes in French cinema: all films with Louis de Funès and Bourvil (comedic geniuses very well-known for their improvisation talents) notably Don’t look now… We’re being shot at!), Welcome to the Land of Shtis, Asterix and Cleopatra, OSS 117: Nest of Spies or Little Indian, Big City.

Do you have other favorite quotes from French movies? Don’t forget to share it in the comments section below!