Christmas and New Year’s in France: The ABC’s

Christmas is considered by many as the best time of the year.

And why shouldn’t it be? The food, the lights, the festive air, the gifts, the carols, more gifts, shopping, more shopping, family, friends, more gifts under the Christmas tree…

It’s got everything wonderful all crammed into a few weeks of celebration. Wonderful, isn’t it? (If you suddenly feel the urge to jump up and down like a little child, we truly understand. Christmas does have that effect on some people, including us, too.)

You can also check it out the podcast episode 36 and 37 for more details.

In France, it definitely is a full-blown (and in some cases, over the top) affair. But how do the French people celebrate Christmas and New Year? Here is a list of what makes the Holidays in France unique, all sorted out from A to Z. 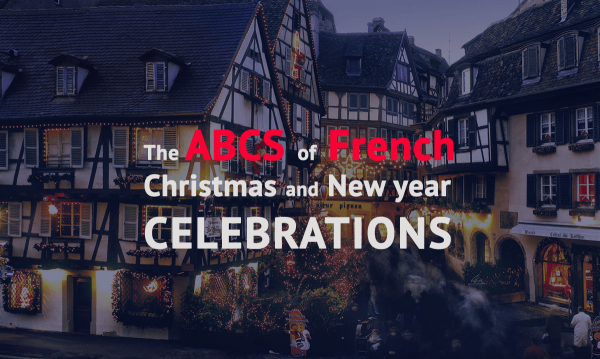 Advent is the time when members of the Catholic Church anticipate the upcoming birth of Jesus, or Christmas day. This is also a popular part of the Christmas season in France. Advent calendars can be found everywhere including in supermarkets and different stores. Children may also receive toys or candies leading up to Christmas day.

Looks too good to eat!

La bûche de Noël or the Yule Log is a cake shaped into a log and made of chocolates and nuts. It is a bit comparable to the traditional fruitcake, but this one represents the special log usually made of cherry wood which is being burned by families inside their homes during Christmas.

Chestnuts often appear in different food and traditions in France. It could be roasted inside the homes or out in the streets through vendors, it could be used in cakes, or it could be included in traditional Christmas desserts.

Merriment during the holiday season is not complete without drinks. During the le Réveillon or Christmas and New Year’s Eve dinners, a common aperitif is kir or white wine mixed with a berry liqueur, crème de cassis. When you substitute the wine with champagne, the result is a cocktail drink known as Kir Royale. Some stick to the regional favorites depending on the area. For example, some places prefer vin jaune which is kind of a Sherry-like Savagnin wine. The main meal is also washed down with different types of wine or champagne.

The Epiphany or la fête des Rois is celebrated on a variable date, but usually it is on the 6th of January. This is basically the celebration of the Three Kings, and in France, there is a tradition called le tirage des rois or literally, the pulling of the kings.The cake, called Galette des rois or three king’s cake, is generally eaten throughout the month of January.

It comes in different variants, usually puff pastry, or filled with almond paste and decorated with fruit candies. There is also a hidden knick knack inside the cake, usually a fava bean or a small figurine. Whoever gets the surprise item in his or her cake slice gets to choose a partner and together they will be given paper crowns and hailed the King and Queen of the celebration.

The traditional menu may vary depending on the region, but dishes such as chestnuts-stuffed turkey, chicken, goose, sea foods, oysters, and foiegras, often make an appearance in the Christmas table. Dessert is also a huge deal. Aside from the previously mentioned la bûche de Noël, le pain calendal is also common in Southern France and is commonly given to a poor person.

In Provence, the treizedesserts go just a little bit overboard with an elaborate creation consisting of 13 kinds of desserts representing Jesus Christ and the apostles. These could include fruits (dried and fresh), assorted nuts, pastries, cookies, and so on. The table preparation for Provençal Christmas dinners is also a tad bit more elaborate than the usual. 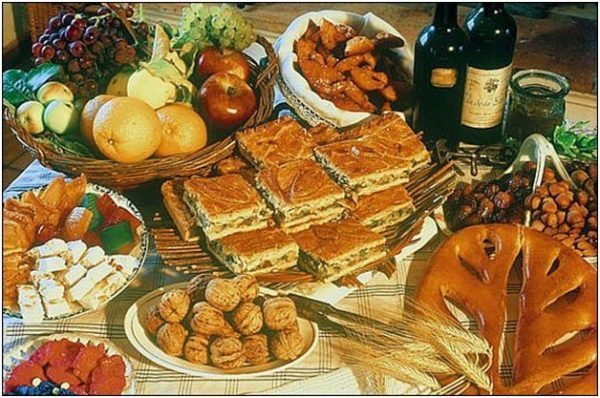 The 13 desserts of Christmas in Provence You can also find street vendors selling Christmasy foods such as roasted chestnuts, gaufres, waffles, crepes, and even vinchaud or warm wine to help keep the cold at bay.

As with the rest of the world, gift-giving is a glorious Christmas tradition in France. In some parts of France, Christmas presents or Les Cadeaux de Noëlarrive as early as the 6th of December during the feast day of Saint Nicholas.

Children also place their shoes by the fire, and wake up on Christmas Day to see it stuffed with all sorts of gifts and goodies (lucky for children with big feet!). Candies, toys, and other fun stuff also appear on the trees overnight (supposedly from Santa). Some adults wait until New Year’s Eve to open their gifts since this is the more grown up celebration.

The following are holiday greetings and words related to Christmas and the New Year. You should probably learn them too.

The New Year - LeNouvel An

Take note that when writing exclamation points in French, there is a space between the last letter and the exclamation. For a longer list of Christmas vocabulary, check this list of Useful French Vocabulary and Expressions for the Holiday Season.

The French Christmas is an intimate gathering for family or close friends. It is characterized by family reunions, generosity, charity to the poor, and making the event as special as possible for the children.

This is how you greet a Merry Christmas in most French regions. However, in Brittany, Northern France, they say “Nedeleg Laouen”. In Corsican, it’s ‘Bon Natale’.

This is a common aperitif during Christmas Eve and New Year’s Eve dinners. Santé !

Lyon’s Lights Festival is one of the most popular attractions during the Christmas season in France. This began as the city’s way of paying homage to Virgin Mary by lighting candles in their windows. Now it has grown into a spectacular display of urban lighting which includes amazing laser lights shows, and calls in tourist the world over who sit down and bask in the city-wide Christmas glow.

This is the mass in Christmas Eve and it is considered by many French families as a very important part of the whole celebration.

One of the most prominent Christmas decorations in France is la crècheor the Nativity. The crècheis filled with clay figures and displayed in homes and churches. Nativity plays and puppet shows are also being performed, and fairs selling nativity figures and scenes are also popular.

The mistletoe is also used in France as a Christmas ornament. These are being hung above the door to bring good fortune throughout the coming year.

Père Noël or Father Christmas is the French equivalent of Santa Claus. He gives gifts to good children. In 1962, a law was passed which decreed that every kid who writes a letter to Santa will receive a response through a postcard.

Aside from Père Noël, there is another ubiquitous Christmas figure, le Père Fouettard or Father Spanking! As the name suggests, he decides who has been naughty and gives them a thorough spanking.

Le Réveillon is a huge feast that marks the Christmas Eve and New Year’s Eve dinners. The word comes from the verb réveiller or to awaken or revive which refers to the symbolic awakening of Jesus Christ. The feast is celebrated with lots of food (see the previous entry on FOOD), drinks (see previous entry as well), and different traditions.

This is basically the French Christmas tree, often decorated elegantly with red ribbons or other ornaments. Did you know that the first Christmas tree originated in the Alsace region of France? This means that this iconic Christmas figure is actually a French invention.

Christmas traditions in France vary between regions, but these are all firmly rooted on family, food, and religion.

Christmas carols are also quite common in French Christmas. One example is this French version of Jingle Bells which goes like this:

V – Villages of Christmas and the Marché de Noël

The Christmas Villages and the Marché de Noël is another big event during the Christmas season. These erected villages feature carollers or orchestras, skating rinks, wooden structures, different decorations, local food and wares being sold, and an appearance from Père Noël. These places can get pretty crowded as kids of all ages (including the kids at heart) all troop to enjoy the festivities.

Christmas in France is often described by tourists as a winter wonderland which looks like it popped out of a lovely Christmas card. It sure does. 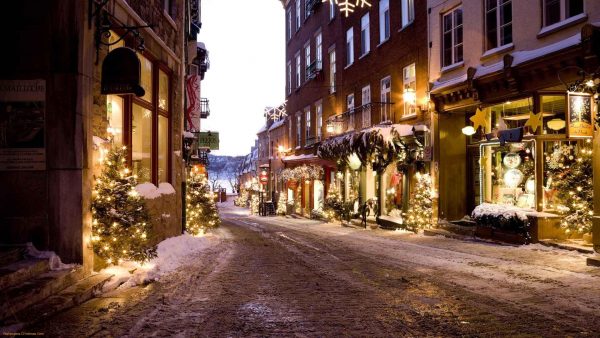 The Yule log is usually made of cherry wood which is often being burned inside French homes during Christmas. The log is sometimes sprinkled with red wine to make it smell even nicer. In some customs, it is left burning all night with some food and drinks in case the Virgin Mary or Baby Jesus decides to drop by.

A typical Christmas Day in France is a quiet event to be spent with family. It is a time to come together and relax, and even grab some zzz’s right before the big New Year’s Day celebration.

So, how about you? Are you planning to spend Christmas in France anytime soon? Meilleurs vœux!