The French Conditional Mood and How It Works Talk in French

French Conditional Mood (Le Conditionnel): How does it work? 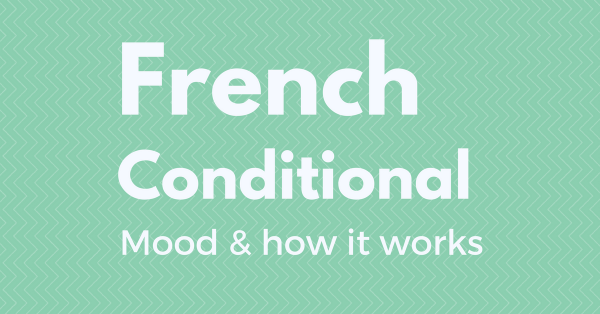 Let's talk about le conditionnel. What is it and how does it work?

Whether you are particularly aware of it or not, we often use the conditionals in our daily speech. The conditionals are both used the same way in English, as well as in French. But first, what exactly is it?

What is the Conditional?

The conditional is a form of verb being used when talking about things that could happen under certain conditions, or those that are not guaranteed to happen but may occur given a certain set of circumstances.

In English we simply use the modal verb “would” or its shortened form 'd, and then we add the main verb after it.

Here are a couple of examples:

In French however, it is a lot more than that. There is a whole set of different rules for different kinds of verbs. BUT – if you are already familiar with how to form the FUTURE TENSE, it will be so much easier to follow.

If you need to brush up on your French future tense, please do so by checking out this link to the article: Learning French Tenses: Future Tense.

Uses of the conditional

Aside from its function as mentioned in the definition given above, the conditional form is used (both in English
and French) in the following instances:

Basic Rules in How to Form the Conditional

1. Rules for regular verbs with -er and -ir endings in the conditional

The rule in conjugating regular verbs to form a conditional is similar to that of the rules for the future tense.
Basically, you use the same stem for future tense and just add the appropriate endings.
Let's use donner and finir as our examples

Je is shortened to j' when preceding a word that begins with a vowel, h, or the French word y.

Some changes in spelling for the conditional stem of regular -er verbs:

• The consonants 'l' and 't' in those verbs which end in -eler and -eter gets doubled. The pronunciation of
the first letter e also changes from 'uhr' to 'eh'. Exceptions are the words geler (to freeze), peler (to peel)
and acheter (to buy).

• For verbs that end in -yer, the y often becomes i when used in the future tense

2. Rules for irregular verbs in the conditional

The verbs with irregular stems in the future tense are the very same irregular verbs in conditional. So if you are already familiar with that topic, this is way too easy for you already.

Some examples of the irregular verbs that have irregular stems in both future and conditional are the following:
avoir, être, faire, aller, devoir, pouvoir, savoir, tenir, venir, voir, vouloir.

To say it simply, even if these verbs are irregular, they still conform to the pattern by using the same endings as the regular verbs.

1. The conditional endings are: -ais, -ais, -ait, -ions, -iez, and -aient. These endings are similar to the
IMPERFECT TENSE endings.
2. The stem used to form the conditional is the same as the stem used in FUTURE TENSE.
3. The endings to be used vary depending on the subject which could either be je, tu, elle, on, nous,
vous, ils, or elles.
4. The main rule for regular verbs with -er and -ir endings is simply to add the appropriate ending to the stem.
5. The list of irregular verbs for conditional is the same as the irregular verbs for future tense.
6. For verbs that have -eler and -eter endings, the l and t get doubled when changing to conditional

If you are having difficulty trying to catch up with this topic, feel free to visit the article on FUTURE TENSE, also in this site. Just remember to keep coming back to review the lessons until you have thoroughly familiarized yourself.

Want more lessons like this? Check out this grammar course!

Previous Post Expressions to Use When Complaining in French Next Post French Tenses Made Easy: Express Past, Present and Future Without Using the Actual Tenses