How to Sound French: 12 Things You Need To Remember About Liaison

There is a huge line between sounding like an actual French speaker and sounding like you're spewing gibberish. We call it liaisons. When done right, congratulations, you will actually sound French-y and coherent. But when used poorly, you will appear as an unintelligible, bumbling mess.

We are here to help you navigate the disparity between the two. 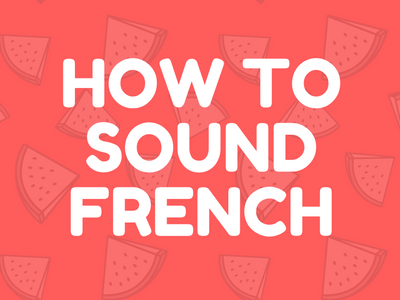 Liaison (French) is what makes listening to and speaking French so darn difficult for newbies (and even not so newbies). Liaisons happen when a consonant which is normally silent, dead, or phonologically null, suddenly gets pronounced at the beginning of the word that follows it.

Think of it as just like your normally silent and docile friend who suddenly acts up under a specific set of circumstances. Like probably the quiet guy who who turns loud and rambunctious after a bottle of beer (yeah you know those types). That's exactly what liaison is like.

Before we go into the details of when and how liaisons occur, or the specific circumstances that set it off, you have to remember a couple of things first. One: there are no clear divisions and syllable boundaries in French words, so the words are all basically linked together. This is unlike English or other languages wherein syllabic boundaries correspond to word boundaries. This is the backbone of the liaisons.

In relation to number two, also keep in mind that the final consonants in French words (except for the letters c, f, l and r) don't get pronounced at all. This happens in almost every case, except when liaisons step in and try to run the show.

The liaison steps into the spotlight and gets some airtime when a word that ends with a consonant (which is normally silent), is followed by a word that begins with a vowel or a mute h. The reason for this is to facilitate the melodious link between words that must never, ever be broken. Like, ever.

When this happens, the sound of the last consonant will be merged with the syllable that follows it.

As you can see, the first word ils ends with the consonant s while the second word ont begins with a vowel. To pronounce this, you say |eel zon| instead of saying  |eel on| which would be so un-French and so wrong. See how s gets pronounced as z and becomes the start of the second word or syllable? That's liaison for you, guys.

Compare this with ils sont which ends and starts with a consonant, and therefore does not require the services of the liaison. It is pronounced as |eel son|.

5. Some liaisons are required

We call this liaison obligatoire, and as the name implies, you should always use liaison in some cases.

Here's when it is terribly necessary that you use liaisons:

6. Some liaisons are optional

We call this liaison facultative. In some cases, you may or may not use liaisons because it is not mandatory at all (hooray!) So when do you need to use these optional liaisons?

In other cases not mentioned, you are probably better off avoiding liaisons. Or not. It's totally up to you.

This is when liaison is optional:

7. Some liaisons must NEVER see the light of day

Remember when we said liaisons are used so that the sound of the string of words remains melodious, unbroken and pleasing to the ears? Well, there we said it. So in cases when liaisons ought to be used (theoretically) but they just don't sound right at all when used, these are times when it is prohibited.

So remember if you feel like using liaisons at some point during those words, please...

There are some changes in the sound of the consonants when it is used in liaisons.

9. Some examples for s, x, and z liaisons

10. Some examples for t and d liaisons

11. It is different from enchaînement

Enchaînement is when a consonant has to be pronounced whether it follows a consonant, a vowel, or a mute h. This is quite unlike liaison wherein a previously silent consonant gets pronounced because of the word that follows it.

12. It is quite different from elision too

It's the opposite, really. Elision happens when sounds that are normally being pronounced, do not get pronounced anymore when it follows a vowel or a mute h. Think of it as your other friend – the one who is usually loud and obnoxious but suddenly goes silent when there is a hot girl nearby. Yep, exactly like that.

Aside from all those listed, the most important thing you have to remember is to keep listening to spoken French. Soon enough the liaisons would jump out at you and become all too familiar. So listen, listen, and listen some more. It will get ingrained in your system soon enough.

If you need any clarifications about this lessons, just ask me in the comment section.