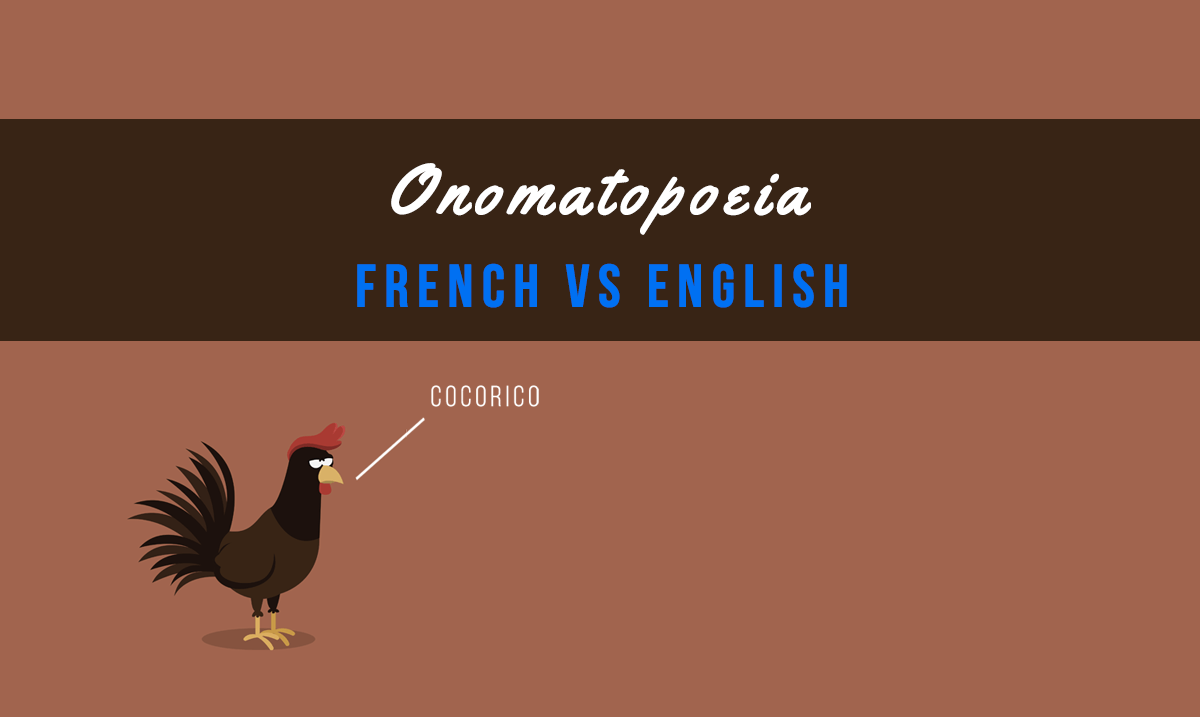 Bonjour ! In this lesson, we'll be talking about French onomatopoeia. Here's a rundown of what's covered in this article.

But before we dive into today’s lesson, let me address the elephant in the room. Some are probably asking:

OK, it does sound like a big scary word. But onomatopoeia is a figure of speech that mimics the sound of an item it describes. It is the “written sound”.

In French it is called une onomatopée.

I'm sure you've been using them everyday---made-up words that are based on how they actually sound. For example, boom! for a loud crash, tick-tock for the so​und of the clock, vroom for the sound of an engine, meow for the sound a cat makes or zzzz for sleeping.

Onomatopoeia comes from the Greek words ”onoma”  which means name and “poio” which means to create. There is a wide range of sounds covered under the onomatopoeia blanket.

These include sounds made by:

The funny thing is, while the different onomatopoeia sound quite natural in your own language, the sounds vary and become more and more hilarious as you go to different parts of the world. For example, a loud evil cackle is a KÄKÄTTÄÄ  in Finnish.  And pigs in Georgia don’t say oink, oink, they say ghrutu ghrutu.

Sound weird? Wait till you see this list of French onomatopoeia listed side by side with their English counterparts.

You’ll encounter some of these as you read a variety of texts in French: it often appears in comic books (bandes dessinées), cartoons (dessins animés) as well as children’s books (livres pour enfants).

No time to read now? You can also download the longer version of this list of French onomatopoeia by signing up below.

Let’s check them out.

The French don’t really catch some Z’s, but some R’s instead. Even better than ron-ron, the snoring sound in French is actually called a ron-pshi to mimic the sound of a loud inhale and exhale.

The sound French babies make when they cry is called a ouin-ouin. Sounds more positive than the wailing sound of a wah-wah, no?

3. Expression of pain in French: aïe !

Did you stub your toe or step on an errant piece of lego? Ow, that hurts! The French would say aïe ! instead of ouch!

One could argue that the sound French people make when they drink-- glou-glou -- is a tad quieter than the standard glug-glug..

6. Sound of a beating heart in French: poum-poum

In French, a beating heart makes a poum-poum sound instead of thump-thump.

Being noisy in a French library? You'll likely hear a "chut !" In English, it’s simply sshhhh!. But shushing someone in French is chut.

8. Sound of disgust in French: beurk

See something disgusting? The French don't say yuck. They would say beurk ! or berk !

Alas, someone brought out a mouth-watering French pastry. Miam-miam!

Now this is weird because smack! in English means someone just slapped the bejeezus out of you. If your French date texts you smack right after you went out, don't take it to mean he or she is into some form of domestic violence.

The sound of a slap in French is called paf, vlan or pof !

French onomatopoeia for sounds made by objects

11. Sound of a clock in French

This is the sound the clock makes: tic-tac in French while it’s tick-tock in English. Close enough, right?

12. Sound of a ringing phone in French

In French there’s a couple of extra d’s in the sound of a phone ringing.

13. Sound of a gunshot in French

Sound weird to you? It sure does. The sound of a gunshot is pan-pan in French!

Would you have guessed that pin-pon is the ambulance sound in French? Quite different from wee-woo in English.

15. Sound of a doorbell in French

Yes this is the sound of a doorbell ringing. And yes, come to think of it, the French one is just a Frenchy version with the extra ue of the English ding-dong sound!

16. Sound of object falling to the ground in French

Something fell to the ground and made a huge noise. Patatra ! the French would say. The English would probably be scratching their head and thinking how it sounded more like a kaboom! or splat! ?

17. Sound of object falling into water in French

The splashing sound an object makes when it falls into water is plouf in French.

What sound does a pig make? The French say it’s not oink-oink but groin-groin !

Which one sounds more accurate? Is it the French’s croac-croac or is it ribbit? You be the judge!

21. Sound of a snake in French

Instead of hissing, the French would say le serpent siffle. The verb siffler is also used to say “to whistle”. So do you think the snake makes a sort of whistling sound? Scary thought, come to think about it.

Just a little variation in the spelling, but close enough.

No, it’s not the sound of an adolescent girl saying an over-extended ‘hi’to her friends. It’s a French sound for the whinny of a horse.

25. Sound a rooster makes in French

Finally, the last one on the list is the sound a rooster makes which happens to be among the most difficult animal sound humans ever had to decipher. While English people would call it a lengthy cock-a-doodle-doo, in French it’s simply cocorico !

Bonus: What sound do hens make in French?

Did you enjoy this list of French onomatopoeia? How do you say those sounds in your native language? Feel free to share it with us in the comments! 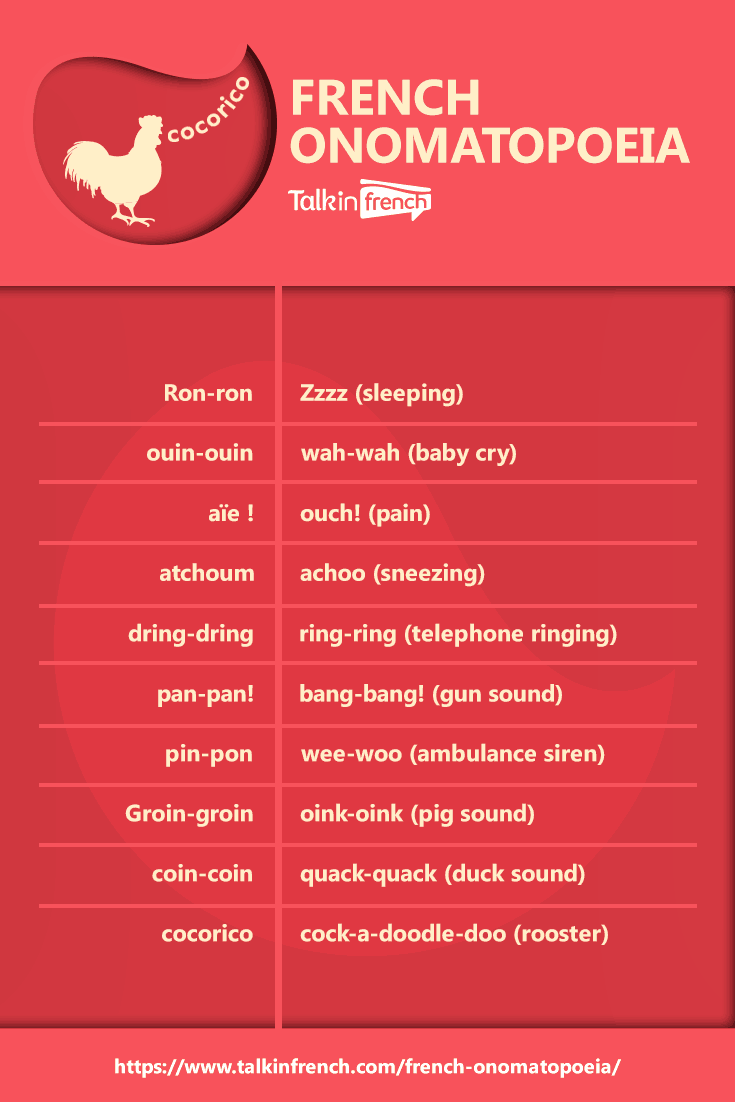