How to Transform French Verbs Into Simple Past (Passé simple) 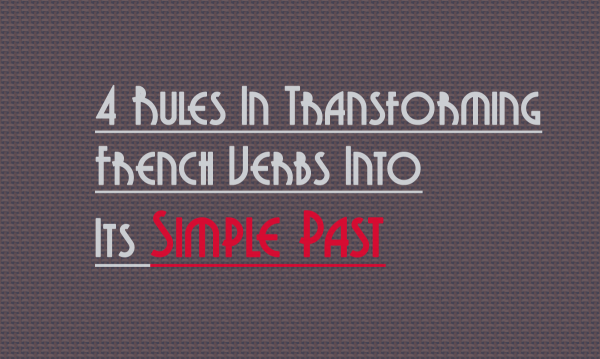 Where could you encounter Passé Simple (the historical and formal tense)? You will probably not see it in a friendly chit-chat, maybe not even in this kind of blog article if it is translated into French.

You will probably say "so what is the point of knowing it? I am not a native speaker, and I can understand French text without it".

OK, you have some point there, but imagine one day, you are reading an amazing novel, and encounter a "strange verb" that you have never seen before. You are probably seeing a verb in Passé Simple, and you will no doubt regret not knowing it  before.

You know what, this tense is usually regarded as a complicated tense for foreign learners of French, but you can never "feel" the beauty and how flowery French is without understanding the passé simple. What a pity if this were the case, no?

The purpose of this article is, of course, not to make you a master of Passé Simple, but to help you understand its rules and be able to recognize verbs using this tense

Grab your notebook and pen to take some notes. If you already have a good/fair level of French and a good memoire, you may try to write down a short paragraph employing Passé Simple after understanding the rules.

Quick Navigation
What is passé simple?
When and where to use passé simple?
How to use it simple past in French?
Quick Recap
Conclusion
an advanced level ﻿﻿﻿﻿﻿﻿﻿﻿podcast﻿﻿﻿﻿ to help you master french

What is passé simple?

Most FLE students (Français Langue Etrangère – French as a Foreign Language) are told that Passé Simple is old-fashioned and that there is no need for them to understand it.

No, don't do that. It would be a pity if you couldn't see and "feel" this beautiful aspect of the French language.

The passé simple is as important as the passé compose, which is commonly used in spoken French. The passé simple or simple past in English takes the place of the Passé Composé in literature. It sounds more flowery and knowing it will help you to better understand novels written in French.

When and where to use passé simple?

Similar to the Passé Composé, the main role of the Passé Simple is to recount a specific action in the past.

How to use it simple past in French?

The conjugation rule of the passé simple is not “simple” as its name suggests, and usually students who attempt to master this tense are advance-level students. But don't be afraid, if you follow the rules, recognizing and understanding this tense is really an achievable target.

Tips: If you read a verb in a French novel that looks weird, think about the Passé Simple. Next, try to replace it with the passé composé, if you feel that the meaning of the sentence has not changed, so you are probably right (that this is the Passé Simple).

1. For regular verbs, to form passé simple, you have to drop the infinitive endings, such as –er, -ir, and –re, then replace it with the passé simple's endings.

Let's take the example of "parler" (to speak).

Note: If the verb ends with –cer, you will need to change c into ç to keep the sound of the soft c.

The same rule applies to verbs ending in –ger, like voyager. Change the –g into –ge but add it before –a.

2. Now, for regular verbs ending in -ir or -re, use the following endings:

3. For irregular verbs, we usually encounter these 2 types of endings:

The hard part is to get the stem. Here , we would recommend you to learn the conjugation of some common irregular verbs (avoir, être, faire, savoir, pouvoir, devoir…), and then you will be able to recognize other verbs when you encounter them in a text.

The passé simple is, after all, is not as "simple" as its name indicates. So, don't push yourself too hard if you can't memorize all the verbs at a glance. Take it easy, do it step by step, perhaps one day you could write your own novel in French, why not?

Please do not hesitate to leave a comment if you have any questions about this tense.