Often when people hear about French food, they think long, complicated processes, difficult to pronounce ingredients, and hard, awfully hard work. French cuisine is synonymous with gourmet food and this is oftentimes enough for amateur home cooks to shy away from.

But hey, guess what? There are simple French recipes that you can make. And it won’t be that arduous and complicated at all. Plus, we’ll be doing some hand-holding throughout the entire process by injecting some simplified terms and will even help you with the difficult to pronounce fancy schmancy French-y words. 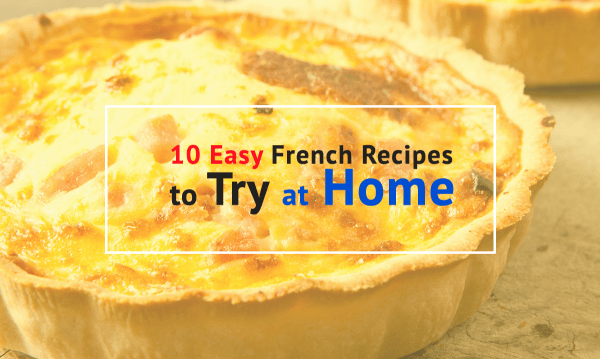 What’s more, we have included photos of the ingredients lists that you can easily save so that you can just whip out your smartphone or tablet when you’re at the supermarket!

So now you can finally do that secret dream you nurture in the deep confines of your mind: the one where you invite all your good friends over for dinner and impress the heck out of them with a wonderfully-prepared multi-course meal. To turn it up a notch, why don’t you invite your mom over, too?  Or if you’re really confident, your BF/GF’s parents! Ha! Major brownie points for you.

To give your French cuisine background an added boost, check out this article about French Food Habits. It will help you impress your guests further with awesome know-how about French food.

We will also be sure to include a few of the French recipes in French, for those interested in challenging themselves in the French language.

So if you’re ready, here we go.

Let’s start, of course, with the starters or the entrée. In France, entrée (a word which means “entrance”) refers to the light first course served before the main one. In some countries however, like the United States and parts of Canada, the concept of entrée has evolved over the years and today, they often refer to it as the substantial main dish; with the starters known as appetizers. But for purposes of this being a French site and all, we will refer to the entrée in its French concept.

This one literally means a ‘Nice Salad’. But not because it’s really nice (which it certainly is), but because it is named from the place where it hails from: Nice, a city in the southern coast of France. 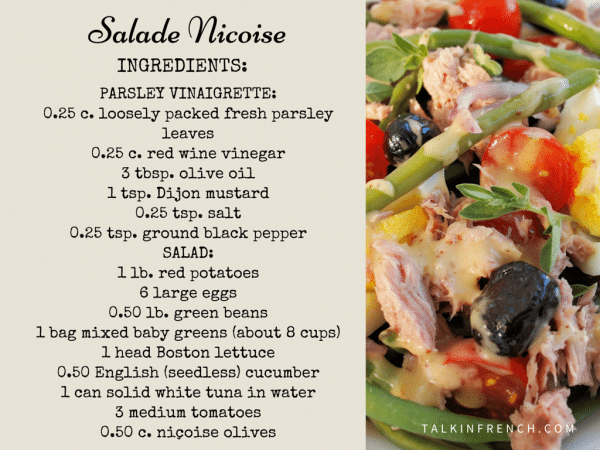 Here’s a version from delish.com that is both easy to do and looks fabulous in the plate, too.

For the instructions, go here: delish.com

We have this French recipe in French as well! Visit here.

The French soup that we know today has been around since about the 1800s. Well-loved as a hearty and soothing soup, it is based mainly on meat stock and caramelized onions and topped with croutons and cheese. 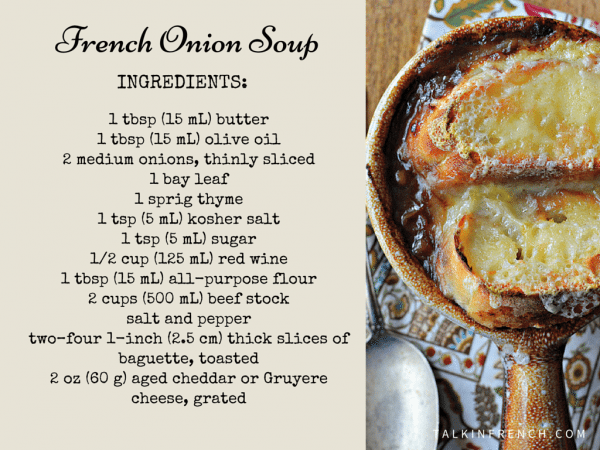 This quick recipe from styleathome.com has easy-to-follow directions that will make cooking so easy for you. Bear in mind though that it’s for 2 servings only, so if you want to make more, you might need to double or triple the ingredients.

For the rest of the recipe, go to styleathome.com.

Quiche is another traditional French food which is basically a savoury pie with various fillings. There are a lot of variants to the classic quiche but for this list, I’ve selected savoury bacon with buttery leek, oozing with cheese. Because – your friends are sure to flip out when you describe it to them that way.

You can serve this as a starter dish or even as a light brunch or lunch. Either way, your guests are sure to love it!

But wait -- did you know that there’s a French expression that makes use of the word quiche? Saying “je suis une quiche en _____” or ‘I am a quiche in ______’ basically means I’m not good at a certain thing. Let’s just hope you’re not a quiche in making a quiche, right? Here’s a recipe to help you with that. 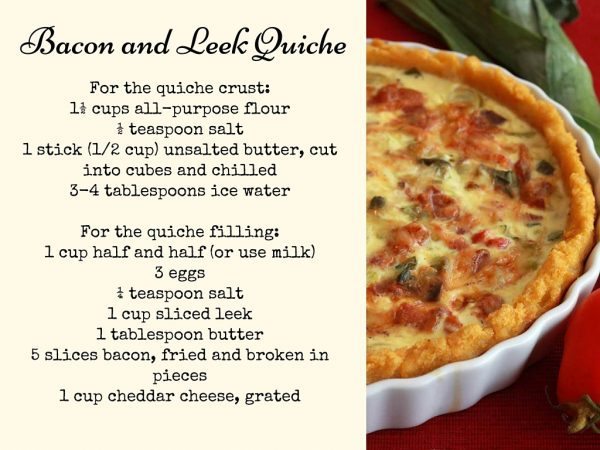 See the rest of the directions over at daringgourmet.com.

Now we go to the main course, the heart of your meal, or in French, le plat principal.

Also known simply as pepper steak, the Steak au Poivre is easy to do but bursting with flavors. It’s a dish that traditionally uses a filet mignon which is then coated with peppercorns and then cooked. And guess what, you can actually do it in less than half an hour. Amazing.

This idiot-proof, super-easy  guide from RealSimple.com should come in really handy. 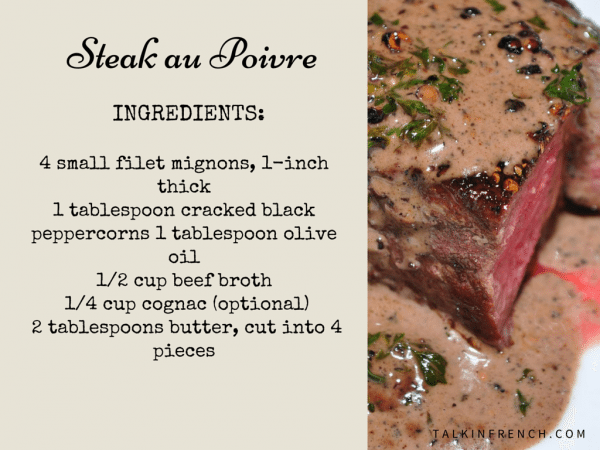 See the rest of the recipe at realsimple.com.

You’re probably worried that this beef stew is about as difficult to cook as it is to pronounce – and spell, too. Thankfully, there’s an easy recipe for this. As a background, the boeuf bourguignon is a Burgundy-style rich beef stew cooked in wine. The burgundy is what gives it great flavour and deep colour.

The recipe in this list is quite easy to do as it has been adapted for the crock pot or slow cooker which makes it totally foolproof and difficult to mess up. So all you have to do is stick everything in the slow cooker, let the thing do its magic, and voila! Boeuf Bourguignon! 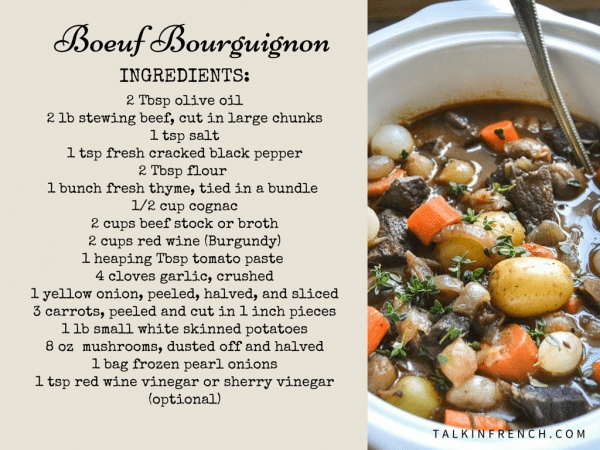 Get the rest of the recipe here.

Coq au vin literally means “cock with wine” and it is simply a chicken stew cooked and tenderized with wine. Originally, tougher older birds are used for this dish, but nowadays, any regular chicken would do.

Here’s a quick yet delicious recipe for Coq Au Vin from eatingwell.com. It’s easy to follow and won’t take a lot of culinary skills to pull off. 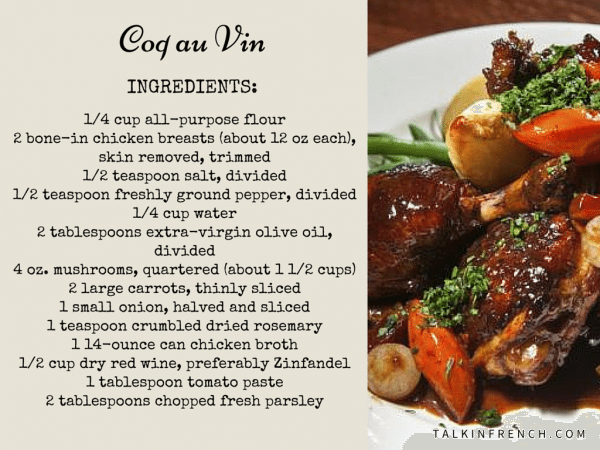 For the recipe, visit this site.

For the recipe in French, visit this site.

Steak frites or Steak and Fries is quite common in brasseries all over France and Europe. This classic French dish is quite simple once you set out and make a mission to do it. This particular recipe from cbc.ca is easy enough to recreate at home. 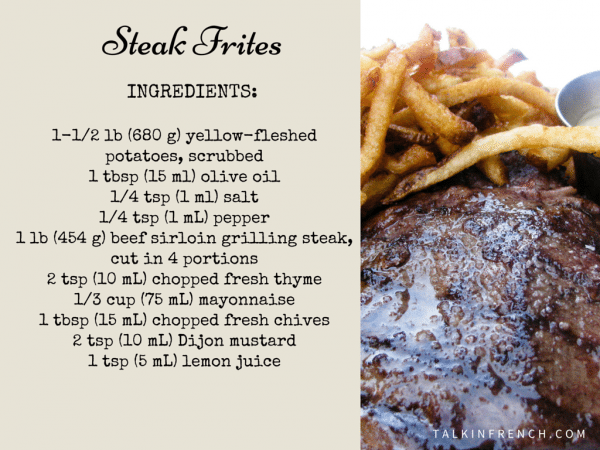 You can check out the rest of the recipe here.

Ahh dessert. The French’s specialty, the ultimate chef-d'œuvre, the exquisite way to cap off the impressive multi-course meal you prepared from scratch.

Some people think about dessert and already they go:

(And by “they”, I meant me). Desserts and pastries are taken quite seriously in France and the country has a looong list of desserts that will wow even the most discriminating foodie. For this recipe list, I have included a couple of no-brainers to tease your guests’ palate.

This classic baked dessert would need a little bit of effort from you, but compared with other French desserts, it’s still relatively easy to do. To those who are not familiar, clafoutis, a traditional dessert from the Limousin region, is made of cherries arranged in a buttered dish and covered with batter. Originally, black cherries are used but there are several variations using red cherries, prunes, plums, cranberries, and many other types of fruit and cherries.

This particular recipe uses any type of cherries you prefer, but plums, apricots, or peaches may also be used as substitute, depending on your taste preferences. 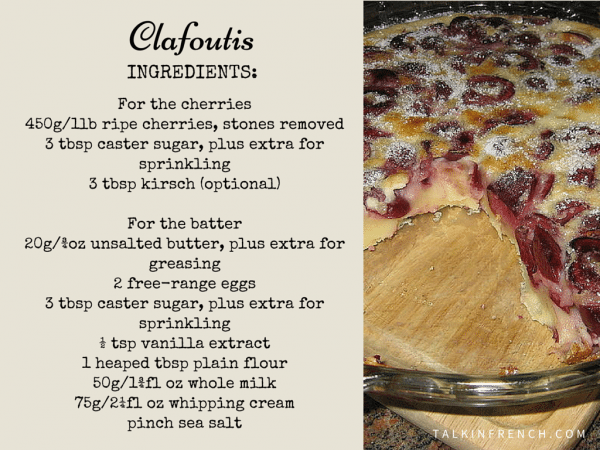 Get the remainder of the recipe here at bbc.co.uk.

This famous dessert is widely popular and loved everywhere and translates in English as “burnt cream”.  The name is pretty straightforward and tells you exactly what it is because the making of this dessert involves burning the custard cream with a gas torch. And yes, that’s the fun part! (and no, I’m not an arsonist!)

This article from 30poundsofapple.com that I’m sharing here is a bit long but the directions are laid out step by step which makes the process easy to follow. For the creation of this dessert, bear in mind that aside from the ingredients listed, you’ll also be needing individual ramekins and the crème brulée torch, so if you don’t have that yet, you should get one too. If a torch is not available, the grill function of your oven would do, though it won’t yield the same results. 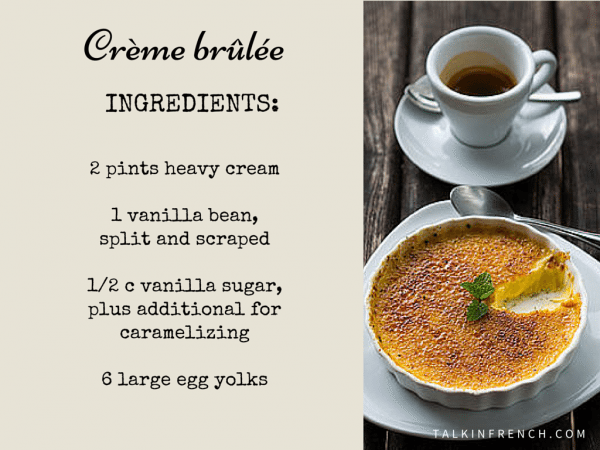 You may check out the rest of the recipe here.

Now if you’re opting for something simpler - probably just a light brunch or afternoon snack with your besties - you can impress them with this French sandwich called croque monsieur.

Don’t let the name intimidate you, this sandwich is both hearty and quite simple to do. You might have seen this featured in the Meryll Streep movie ‘It’s Complicated’, where Meryll served up Steve Martin and Alec Baldwin with a cheesy, oozy sandwich thing that made both men swoon.

Well, this was it. Behold, the croque monsieur!

Effortlessly sexy, so elegant. It’s something that wows any guest and before they know it, they’re already goners, twirling around your crafty little croque monsieur-making fingers. 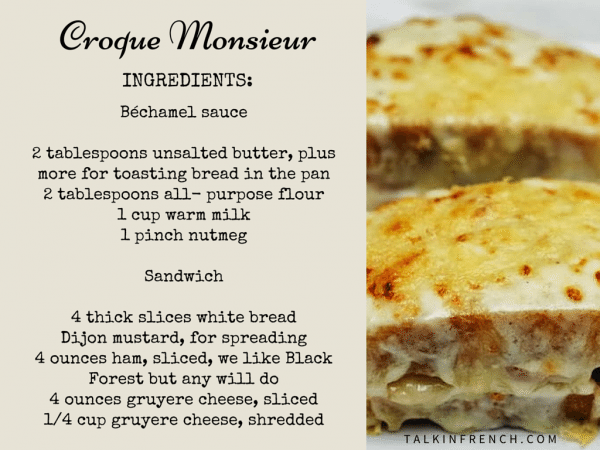 Well now you can pull off a Meryll Streep and make your own classy sandwich with this easy recipe from FoodRepublic.com.

Get the rest of the recipe here.

Nothing beats the real deal, of course. When you can, it’s best to just grab your SO, friends, or family and go on a food adventure in France!

Remember, when heading to France for some authentic French cuisine, grab a copy of the Travel in France with Confidence e-book from Talk in French. It has a menu reader that will help you find your way through French food. Pair that with Paris for Foodies, a must-have travel companion for any food aficionado travelling in Paris!

Do let me know how your dinner goes! Please feel free to share in the comments section.