“Demonstratif” may sound like such an overbearing and intimidating lesson, but trust me, this is among the easy ones. 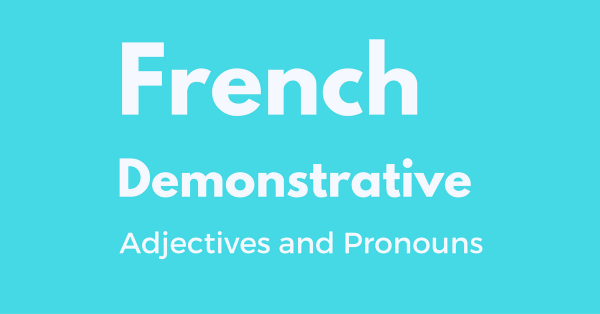 As previously discussed in the lessons about French adjectives, adjectives are words that describe or give further information about a noun. Demonstratives do that too.

Simply put, demonstrative adjectives are used to point out something and indicate a specific noun. In English, these are the words: this, that, these, and those.  (example, this gum, that troll, these jars, those unicorns)

In French, the word 'ce' covers the entire demonstrative adjectives. This will, however, change its form depending on the kind of noun it is referring to.

Both ce and cette can refer to 'this' or 'that', and it is usually understandable which one the speaker is referring to, based on the context.

Ces can refer to either 'these' or 'those', regardless of the distance of the noun being pointed out.

And that's it for the demonstrative adjectives.

Now we move on to the second part.

The function of a pronoun is to replace the noun that it is referring to. The demonstratives this, these, that, and those can be used to do the same. For example, we say, ”that was so much fun!” or “this is what I've been waiting for all my life!”, and “these are awesome!”

French demonstrative pronouns work the same way, except that they have to agree with the nouns they're replacing, and a different set of words are used and not the same ones as the demonstrative adjectives.

Ce goes together with the verb être which means to be.

Ce is used in the following 3 instances:

Cela and  ça both mean it, this, or that, and could refer to either a statement, an idea, or an object. The difference between the two is that  ça is the less formal one and often appears in everyday speech.

Ceci is not as commonly used as cela and  ça. Its uses are: to refer to something that hasn't been previously mentioned, or to show someone a certain thing.

Celui means the one, and the rest are the different forms you use when referring to its feminine and plural forms.

celui and its different forms are used in the following cases:

Here's a QUICK RECAP OF THE TOPIC: