Getting to Know the French Imperfect Tense (Imparfait) 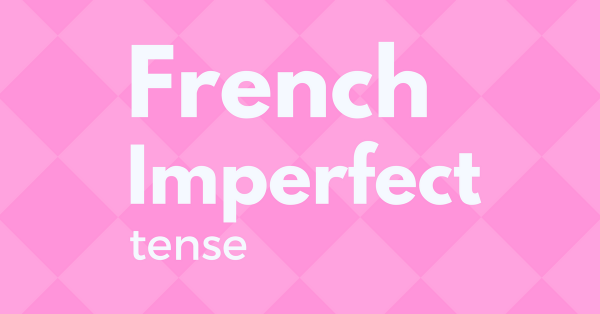 In case you're racking your brain trying to recall your lessons in imperfect tense in English, chances are, you won't remember it. Why? Because the imperfect tense is only common in the romance languages such as Latin, French, Italian, Romanian, Spanish, and Portuguese.

In English, we use the past progressive to denote continuous action while the simple past is used to express a previous state.

In French, the imperfect or imparfait is the verb tense used to talk about past events, especially as descriptions. This is why it is often called a “descriptive past tense” since it is commonly used in giving a description for something that happened.

Unlike the perfect tense which is used in events that were fully completed, the imperfect tense does not imply a beginning or ending of an action. The duration of the event being talked about is unspecified, hence, it is imperfect.

The imperfect is called such based on the Latin word imperfectus which means 'unfinished'.

When and How to Use the Imperfect Tense

Here are the common uses of the imperfect tense:

1. To give a physical or emotional description of a past event.

◦     She was depressed when her boyfriend left.

2. To talk about a past habitual occurrence or state of being.

3. To indicate an action that was ongoing when something else took place.

◦     I was looking at the photos when I remembered our old house.

How to Form the Imperfect Tense in French

A possible mistake would be to literally translate the English counterpart of the imperfect by using the verb être. This is not be the case for the French imperfect tense. To conjugate a verb into the imperfect, you need only change the ending of the verb.

The Imperfect Tense for -er Verbs

Let's take for example the verb donner. Chop off the -er, and add the following endings based on the pronoun:

Important: je changes to j' when used with verbs that begin with a vowel, most words that start with h, and the pronoun y.

As an example, let's use the verb finir. Remove the -ir and add the appropriate endings.

The Imperfect Tense for -re Verbs

We'll use attendre as an example. Take out the -re and add the correct endings.

Like in other tenses, verbs that have a -cer or -ger ending have slight changes in their spelling when conjugated to the Imperfect Tense. Take note of the 1,2,3,6 pattern in the changes. Meaning, the changes occur in the first, second, and third person singular, and in the third person plural.

The Imperfect Tense for Irregular Verbs

Fortunately, there is only one irregular verb for the imperfect tense, and this is the verb être. More good news, it even follows the pattern to which makes our lives super simple this time.

Example: J'étais heureux. (I was happy)

Before we finish this topic, let's take a look at the most important points discussed: