French Names and How to Pronounce Them + Hidden Meanings 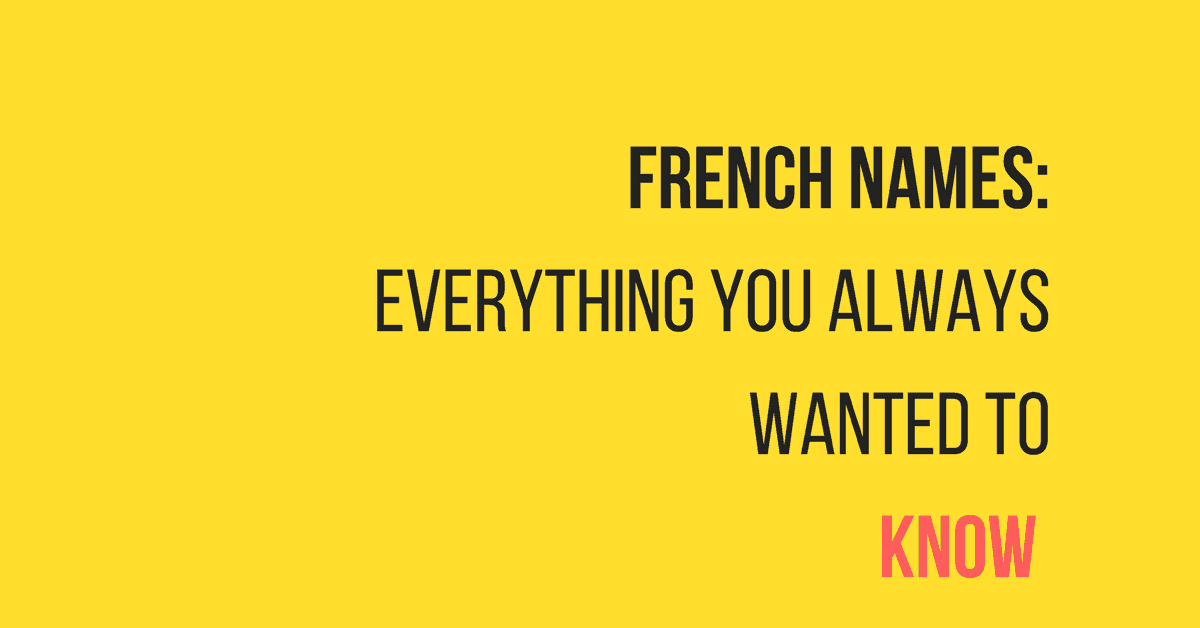 Different cultures have different naming traditions, and in France, French first names reflect its language and culture. Whether you’re looking for a French name for your baby, learning how to pronounce them or simply just satisfying your curiosity about French names, this article will help you.

Most of us, especially those with not-so-common names, have sat through one situation or another where a person we’re talking to is murdering our names by pronouncing it the wrong way.

Now imagine what it’s like for French people. French words are notoriously difficult to pronounce for non-French, and names are no different. To give you an idea, check out this short Buzzfeed video where Americans try to say French names.

If you found yourself fumbling through the names just like the people in the video, don’t worry, this article will tell you everything you’ve always been wondering about French names. We’ll address those questions one by one, and after reading this article, you’ll be one step closer to speaking to French people with confidence.

Before we dive into the nitty-gritty, keep these things in mind:

Counterparts in other languages

Most French names have versions in other languages, especially English. For example, Éléonore is Eleanor while Guillaume is William. There are few, however, which are uniquely French. The most unusual names will be listed later, too. So watch out for that.

Most traditional French names are gender-specific

Masculine names can be made feminine and vice versa, by adding or omitting a few letters. Often you can change a masculine name to feminine when you add –e, -ine, or –ette. Jean, for instance, becomes Jeanne, Jeanine, and Jeanette with the addition of the mentioned suffixes.

Some cases, the spellings change to accommodate the feminine counterpart just like Frédéric (M) which becomes Frédérique (F). A few names are gender-neutral or unisex like Dominique, Camille or Maxime. But just like in other languages, names are increasingly becoming modern and unconventional.

This is why you’ll see a lot of Jean-Claude, Jean-Baptiste, Pierre-Louis, Marie-Eloise and many others. The names are usually combined from two names of the same gender, like Jean-Marc, but sometimes, you’ll come across hyphenated French names composed of one male name and the other a female name, like Jean-Marie.

No need to be confused with the gender though. Just remember that the first name in the hyphenated sequence is the correct gender. Therefore, Pierre- Marie is a male name while Marie-Pierre is a female name.

Another important detail about hyphenated names is that both names are considered a single unit: not two separate names but a single first name. This is why you don’t take liberties of calling Jean-Luc as just Jean or Pierre-Louis as simply Pierre. Address them by their names Jean-Luc and Pierre-Louis. Because that’s just how it is.

Traditionally, French names were based on saints from the Roman Catholic calendar of saints. This explains the prevalence of names like Pierre (Peter), Jacques (James), and Marie (Mary). On top of that, did you know that in the 18th century, French names used to be restricted by the law and limited only to popular saints’ names?

A new law was passed in 1966 which allowed additional foreign and regional names, diminutives, mythological names, and alternative spellings to be used. And finally, in 1993, French parents may already name their kids without any type of legal constraints. (Source: Wikipedia)

You might also have noticed that it’s common for French people to capitalize the letters in their surnames, here’s the reason for that. In case you’re wondering why, many people in France have last names which are also first names. So to avoid a potentially awkward situation, the capitalization distinguishes first names from last names.

Take a look at the top 50 surnames in France. See how most of them are first names, too? Yup, that’s why.

Now for the list of the usual French names. You might have read these names already in books, history, movies, or pop culture, but what you might not know is how exactly to pronounce them as well as the meanings behind it.

We have divided the names into fifty each for female and male. Take note, however, that the pronunciations are in basic phonetics, for an easier grasp and understanding, even for those who have not studied IPA.

If you happen to be on the lookout for the coolest-sounding unique French names for your baby, or simply just interested to see a list of the most unusual French names, well, look no further. Here’s a small list of rarely used French names that you probably never heard of before, including their pronunciations.

IV. Famous French people and how to say their names

There are quite a number of important French people in art, music, and current events. And often, these names could come up in small talks or business chit-chats. How do you say their names without committing a social faux pas?

Here is a list of popular French names and a basic pronunciation guide, plus a quick reminder of who the person is.

There you have it. Everything you need to know about French names that we could possibly fit in one article. Should you have any comments, please do not hesitate to sound off in the comments section below.

Looking for French nicknames to call your loved ones? Here's a good list of French terms of endearment!

For more of these kinds of helpful information, you can sign up to my weekly newsletter by clicking the box below. I promise, you’ll love the updates.

Until the next article! Merci beaucoup!