I can sense your reaction. It goes like this: French reflexive verbs? Say what?

But fear not, we will change all that with a quick read. Before you know it, you’ll be quite knowledgeable about the topic (or not)---it all really depends on how interested you are. 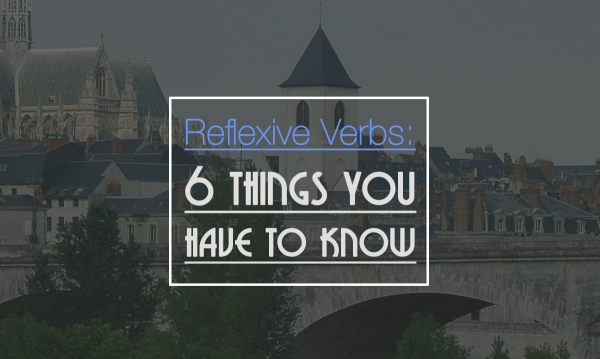 Reflexive verbs are action words that refer to the same subject and object. Meaning, the person being talked about in the sentence is doing the action to himself.

In English, it often appears with reflexive pronouns such as myself, himself, herself, or themselves. (Example: The cat bathed itself.)

Reflexive verbs work basically the same way in French as in English. However, it is used more widely in the former than we normally do in English.

A reflexive verb consists of a reflexive pronoun and a verb. In dictionaries, these verbs appear as se + the infinitive form.

The group of verbs known as reflexive verbs share some distinct commonalities. These include the following:

4. How to form the reflexive verbs in the present tense

Here is a step-by-step guide on how to use the reflexive verbs.

Step 1: decide which reflexive pronoun to use, based on the subject (which is also the object of the sentence). It could be either of the following:

Il s’habille. He is getting dressed.

Some very simple examples that involves a lot of washing:

5. How to form reflexive verbs in the past tense

To form the reflexive verbs in the past tense, we use the ever-helpful verb être as its auxiliary. Here is a little step-by-step guide.

As always, there are exceptions. So –

Step 4: Determine if there is a need for agreement or not. Remember that you do not need to bother with past participle agreements during the following cases:

The following reflexive verbs are always used with an indirect object reflexive pronoun.

6. Where to place the reflexive pronouns

There are three simple things you need to remember when using French reflexive pronouns and these are :

Quick tip: You use toi when you tell someone TO DO something, and t’ or te when you DO NOT want him to do it.

Quick reminders before we end this article:

So with that, we say bye bye!

P.S: If you need clarifications about the topics, please ask us in the comment section.

Here are some FAQs about French Reflexive Verbs

How many French verbs are reflexive?

Because of how common the reflexive form is, there are countless reflexive verbs. More than 100+ for sure! Keep in mind that they are usually limited to either everyday things you can do to yourself, or in regards to one’s personal state, body parts, hygiene, clothing, or location.

What are 5 reflexive verbs in French?

Five examples of reflexive verbs in French are: s’appeler (to call oneself), se dire (to say), s’aimer (to like/love oneself), se réveiller (to wake up), and se coucher (to go to bed).

How do you identify a reflexive verb in French?