Are you looking for the perfect French name for a boy or girl? Here is a list of the top 42 French names that might work for you. 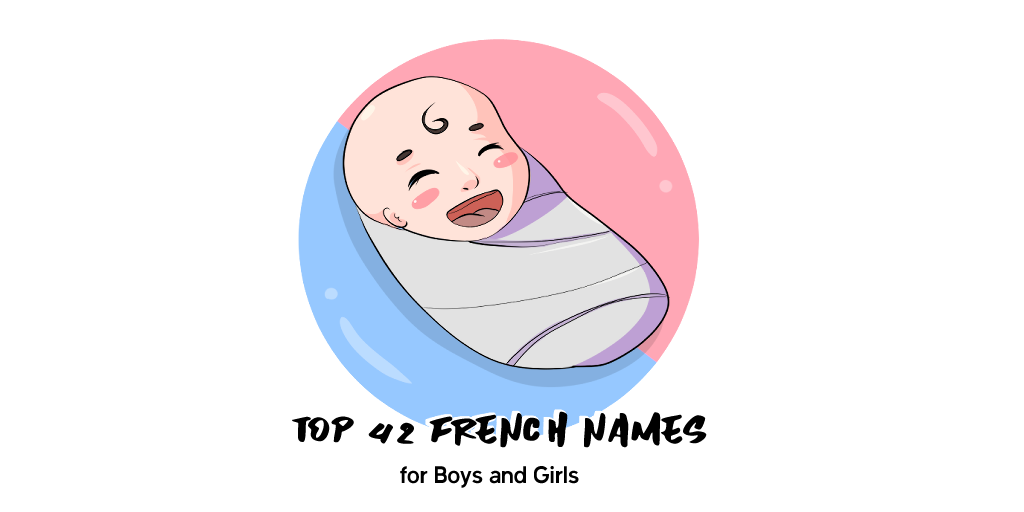 Why Is a Name Important?

A lot of people will agree with the statement that your name forms a part of your identity. From a young age you will know your name and most children begin talking about themselves in the third person.

That being said, names are a very important part of a person’s life. Below are 42 French names, some you will find work for both genders, while others are used more as girls names and others as boys names.

Also for those reading this that are parents or about to become one and want to teach your kids French, you might want to check out the article French for Parents 101.

The name originated as a French diminutive of Adele and has since become popular in the US, especially with its other spellings.

Adeline was introduced in England by the Normans, however, after a bout of popularity it slowly faded out of use until it re-emerged in Victorian times.

The name is the French version of the Latin name “Amata”.

There are many different spelling variations of this name, including “Amy” which is popular in England and “Aimee” (without an accent).

The name is the French variation of Alexandros, a Greek name.

The pronunciation of this name is similar to that of “Alexandra”.

The name is a Catalan and Provencal variant of Anna. It is also thought that the name could have come from a Persian goddess of fertility and healing.

Andre is a French boy’s name meaning “strong and manly”.

Andre, sometimes André, is the French and Portuguese version of “Andrew”.

The name was most popular in the 1970s-1980s, however it still remains popular and is used frequently around the world.

Beau is a French boy’s name which is popular in the US meaning “handsome”.

It is a fairly new name, only having emerged in the 20th Century. While it is predominantly used for boys, it has been known to be used as a girl’s name a few times.

Blaise is a unisex name meaning “to lisp or stammer”. Although, given that the name also has origins in Latin, there are several other meanings that could relate to Blaise depending on where you are in the world.

There have been several notable Blaise’s over the years, including a Christian martyr and Merlin’s secretary.

Camille is a French unisex name meaning “girl in white” or “religious attendant”.

It is derived from the Latin “Camilla”.

Caroline is a French girl’s name meaning “song of happiness”.

The name is the feminine variation of Charles.

Chloé is a popular French girl’s name meaning “young green shoot”, although in a broader sense the name can be taken to mean “blooming” or “fertility”.

The name derived from the Greek Khloē. Although it has several links to different religions, for example Chloé was the epithet of Demeter, the Greek goddess of agriculture and the harvest, as well as one of the first Christian converts.

Clémence is a French girl’s name meaning “mild, merciful”, which has been around since the Middle Ages.

The name is a feminine variation of Clementius, a Latin name.

Colette is a French girl’s name meaning “people of victory”.

The name began as a short form of Nicole.  Although it lost popularity for a while, it was recently made more popular with its appearance in Ratatouille.

There was also a French nun called Saint Colette who would give her money to the poor.

The name was derived from the name Alodia, which potentially became the Spanish Elodia before becoming Elodie. It is very popular in German and French speaking countries.

Gabriel is a Hebrew name that is popular in France meaning “God is my strength”.

The name is a favourite for Christian parents as it is the Archangel who brought the news of Jesus’ birth to Mary, as such he is known as being the bringer of good news. Also, in Islam Gabriel was the angel who dictated the Quran to Mohammed.

There are feminine versions of this name as well, such as the French name Gabrielle.

Genevieve is a French girl’s name meaning “belonging to the tribe” or “race of women”.

The name comes from the medieval German names Genovefa, also found as Kenowefa, and is currently the most popular it has been since 1930.

The patron saint of Paris, who was around in the 5th Century defending the city from the Hun, was Saint Genevieve.

There are many different names that contributed to the creation of this one, including Louise and Clovis.

It is the French version of Helen and Helena.

The name originally appeared in Greek legend as the wife of the King of Sparta (and the daughter of Zeus and Leda) whose kidnapping led to the Trojan War. It was also the name of a Saint in the 4th century.

Isabelle is a French girl’s name meaning “pledged to God”.

The name is a variant of the Middle-aged name Isabel, which developed from Elizabeth.

The name is the French variation of James and Jacob, as such it is another French name that has biblical roots.

The name is the French variation of John and is commonly combined with other names, such as “Jean-Paul”.

Jeanne is a French girl’s name meaning “God is gracious”.

It is another way of using the name “Jean”.

Josue or Josué is a French boy’s name meaning “the Lord is my salvation”.

It is a variation of Joshua that is used in France, Spain and Portugal.

It is the French form of Julian which derives from the Latin Julius.

It is a variation of Juliet. The name Juliet originally derived from Julius, as the name is thought to be the feminine version of Julien.

Léo, or Leo without an accent, is a popular French boy’s name meaning “Lion”.

The name has links to astrology as it is the fifth zodiac sign, in Spain it is the name for a holy oil and a constellation is also named Leo.

The name has recently been increasing in popularity due to its use by several high-profile couples, such as the Duke and Duchess of Cambridge.

Luc can either be used as a stand-alone name or it is used as a shortened version of Lucien.

It is derived from the Gallic name Lucian.

It is derived from the Gallic name Lucian.

Madeleine is a French girl’s name meaning “woman from Magdala or high tower”.

It is the French version of Magdalen and has several various spellings including Madeline.

Marc is a French boy’s name meaning “of Mars the god of war, warlike”.

This is a popular variation of Mark in French and Welsh.

Mathéo is a popular name (top 100) in France, but actually originated in Spain.

The name is a variant of Matilda, which comes from Mahthildis, which is a German name.

Mathis is a French boy’s name meaning “gift of God”.

It is another French variation of Matthew, which is popular in France and Germany.

Nicolas is a French boy’s name meaning “people of victory”.

It is the French and Spanish version of Nicholas, which is of Greek origin.

It is currently as popular in France as Gabriel.

Remi, primarily used for girls, or Remy, which is more commonly used for boys, is a popular French name.

Sacha is another French unisex name that has growing popularity.

Sophie is a French girl’s name which began as a variation of the Spanish Sophia, meaning “wisdom”.

Like Louis, Sophie is a name that has been used in royal families recently, for example Princess Sophie of Sweden.

Théo is a French boy’s name which means “divine gift”.

Théo can be spelt without the accent as well and is usually assumed to be a nickname of Theodore.

Valentin is a French boy’s name meaning “strength and health”.

It is a name of German, French, and Scandinavian origin.

The name means “life” in Greek. It is another religious name that has been used by two Christian saints.

There you have it, 42 French names for boys and girls. It is important that you choose a name that you like and will suit your child--from childhood until they become elders.

If you are looking for a baby name, think about how your child will feel about their name as they get older. Some names sound cute for young children, but wouldn’t seem appropriate in a professional setting as they grow up.

If you are interested in learning more facts about French names and how to pronounce them, you can read Everything You Wanted to Know About French Names But Were Too Afraid to Ask.

Or, if you are looking for a French name to call someone you love, there is a list of French endearments that you can look at as well.
Previous Article
Next Article