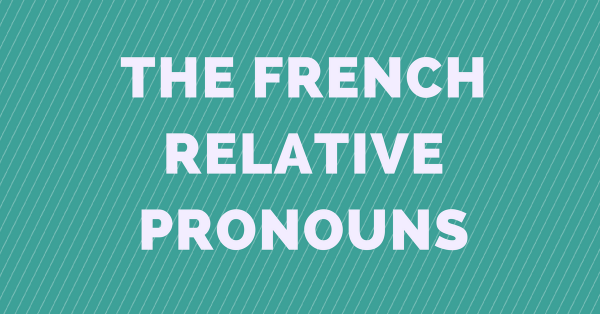 In this lesson, we'll talk about French relative pronouns or pronoms relatifs.

A Review of Relative Pronouns in English

In English, relative pronouns are the words who, which, that, whom and where. These types of pronouns serve several purposes:

To talk about it in grammar-y technical terms, relative pronouns are also used:

When it comes to French, relative pronouns work the same way. These are the words qui, que, lequel, auquel, duquel, dont and où.

Qui and que can both be used to refer to persons or things. The main difference is, qui is used for the subject (or indirect object for persons) while que is for the direct object. Qui is also being used after a preposition (à, de or pour)

Qui (subject) could mean who, which, or that.

Que (direct object) could mean who, whom, which, or that.

Mon frère, qui a vingt ans, est à l'université. (My brother, who's twenty, is at university.)

*Est-ce qu'il y a un bus qui va au centre-ville? (ls there a bus that goes to the town centre?)

Les amis que je vois le plus sont Léa et Mehdi.  (The friends that I see most are Lea and Mehdi.)

*Kindly note that que is shortened to qu' if it precedes a word that starts with a vowel or most words that begin with a letter h.

Here's a major difference between English and French relative pronouns: in English, who, which and that are often being interchanged in daily use. In French, however, this in not the case. Qui and que strictly have separate uses for each.

Lequel is the French relative pronoun counterpart for “which” and it is used for indirect objects. It follows the prepositions à, de or pour and only used when referring to things (never about people). In addition, it has to agree with the noun's gender (masculine or feminine) and number (singular or plural).

All four means “which”

Aside from having to agree with the noun's gender and count, you also need to consider the combinations of words which, in turn, creates an altogether new word.

Similarly, lequel changes into different words when combined with the preposition à and de.

Another French relative pronoun is dont. When translated in English, it means whose, of whom, of which. It may be used to refer to persons or things. The good news is, it does not change its form, nor does it have to agree with anything!

Plural noun: les films dont tu parles  (the films you are talking about)

This French relative pronoun is used for places and times. Its English counterpart could either be where, when or even which and that, depending on how it is used.

Où is also used as the question word where (see article on ASKING QUESTIONS IN FRENCH) and the way it is used as an interrogative pronoun is basically the same as its use as a relative pronoun. There is an added function however, and that is to refer to a time something occurred.

In short, it covers both place and time in its relative pronoun function and takes the job of “when” as well, aside from “where”.  (Note: the interrogative pronoun “quand” is not as multifunctional as où and cannot be used as a relative pronoun.)

Paris est la ville où on peut manger les meilleurs escargots. (Paris is the city where we can eat the best snails.)

In addition,  où can also be used after prepositions.

Can you try making your own sentences using the French relative pronouns you learned in this lesson? Share it with us in the comments section!

Previous Post French Past Tense: Everything You Need to Know Next Post 129 Common French Adjectives [with PDF and MP3]