How to Fake a French Accent: A Quick Guide | Talk in French 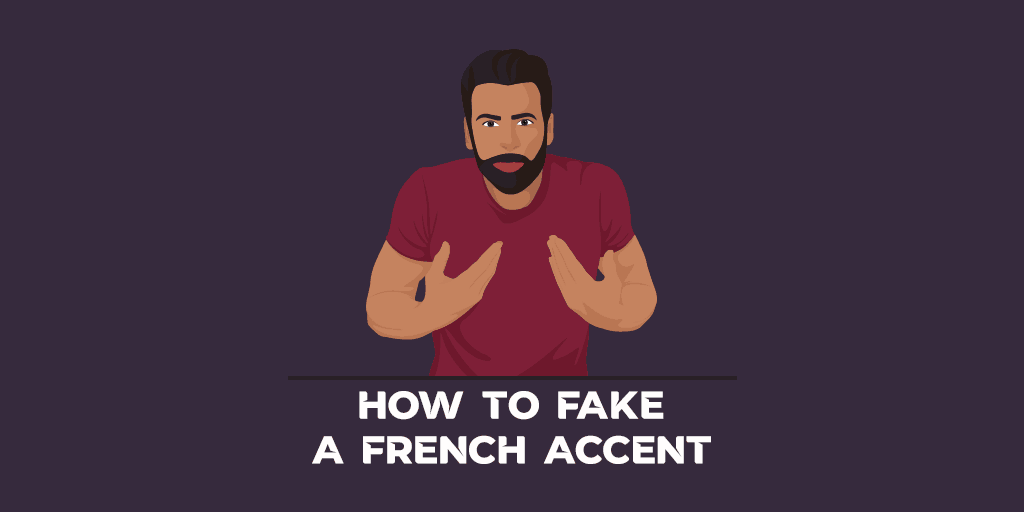 The French accent is a significant way to distinguish between native speakers and those still learning the language. There are ways, however, to fake a French accent so you can fit right in with the locals.

The accent is very distinct as compared to other languages – speaking with the accent also helps for improving your French-speaking skills.

French accents around the world

There isn't just one version of French – there are approximately 270 million people who speak French either as their first or second language. There are countless more who are learning French to use while traveling, work, or other personal reasons.

France isn't the only place with native French speakers. People speak French all around the world, and as you can imagine, it varies slightly depending on the location. Other places where you'll find French widely spoken include Canada, French territories, and countries in Africa such as the Reúnion Islands, Djibouti, and Côte d'Ivoire.

So out of the 84 'la francophonie' countries (or French-speaking countries), which accent should you learn?

The standard for learning French remains Parisian French. As the capital of France and where most of the language originated, speaking with a Parisian-French accent allows you to easily communicate with speakers no matter where they're from.

The Difference Between French in Quebec and France

Ways to fake a French Accent

Successfully faking a French accent involves understanding specific aspects of the language to apply the accent correctly. French speakers have a unique way of pronouncing vowels and words, using different parts of their mouths or face to produce sounds only found in French.

Once you understand these characteristics, you'll have the perfect French accent, whether speaking in French or using a French accent in your language!

The r-sound is one of the most distinguishing factors for faking a French accent. French has two types of r's used in the language: the basic 'r' pronunciation and a uvular trill sound.

The 'r' sound in English is usually pronounced as 'are' or ‘er.' In French, it's pronounced 'air.'

The French rarely pronounce the r-sound as we do in English. The letter produces a sound involving a uvular trill, a skill you should learn if you want to perfect the French accent. The sound comes from the back of your throat with air moving past your uvular to make it vibrate.

The uvular trill is helpful when using a French accent to say English words to sound like a native French speaker.

Since the th-sound is absent from the French language, native speakers replace it with a z-sound. It's essential to use when practicing a French accent with English words for producing an authentic accent.

In French, you'll see a lot of words with the letter 'H' in their spelling, but when you say them aloud, the 'H' is silent.

If you want to fake a French accent in English, you also have to make the 'H' in every word silent.

You would pronounce 'hair' as merely 'air' or 'hamburger' as 'am-bair-gair.'

Another distinct element of the French language includes the use of the nasal when producing certain sounds. These nasal sounds are common when using the words:

Each of these words sounds more closely like 'un,' but has different meanings. Beginning French speakers find it difficult to tell the difference between each, but once you master the sound, you'll sound like a native speaker in no time.

How to improve your French accent?

It takes a bit more than reading about the French accent to be able to 'fake it till you make it.' As with everything else in learning a new language, you have to practice it a bit to truly sound like a native French speaker.

Now that you have an idea of some of the things to keep in mind to produce a French accent, you can keep them in mind while using the following accent-learning strategies:

The best way, by far, to learn the French accent is by listening to native-speakers using it in regular conversations. Listening helps you to pick up how words are said, the tone, pace, emphasis, and much more that you typically wouldn't get from merely reading it.

In case you can't sit around a café all day in Paris and listen in on the local conversations, you can always find a great movie or music to listen to. There are plenty of French listening exercises to hear native speakers talking to each other.

Check out these free resources from Talk in French:

How to Practice Listening in French

You can produce a lot of the French accent by the way that you say words – how you hold your mouth, where you place your tongue, how air flows with your pronunciations. Many of these subtle techniques involve "watch" how someone speaks French.

Most French-speakers talk with a small mouth, typically pursing their lips together to pronounce many words.

Sometimes, holding your mouth the correct way is just enough to fake a French accent. It will surely help with word pronunciation.

10 Essential French Movies to Watch Before Heading to Paris

Did you know that there are more than 1,000 words in French that are spelled and mean the same thing in English? The biggest difference is how you pronounce each word.

French cognates are a great place to start with learning the French accent since the words are so similar in both languages. If you keep in mind the characteristics of the French accent mentioned above and say them in a way like you see native-speakers talking, you will have a better chance at faking the accent.

Faking a French accent is excellent when first learning to speak the language. Learning the accent helps you say words in their correct pronunciation, and the practice is great for better comprehension of French.

Let us know in the comments some of the ways you practice faking a French accent.

Previous Post French Vocabulary: Names of Diseases and Ailments in French Next Post French Easter Traditions: How to Celebrate Easter in France