The 12 Best French Movies on Netflix

Are you wanting to watch films in French but aren’t sure where to start? Here is a list of twelve of the best French movies available on Netflix. 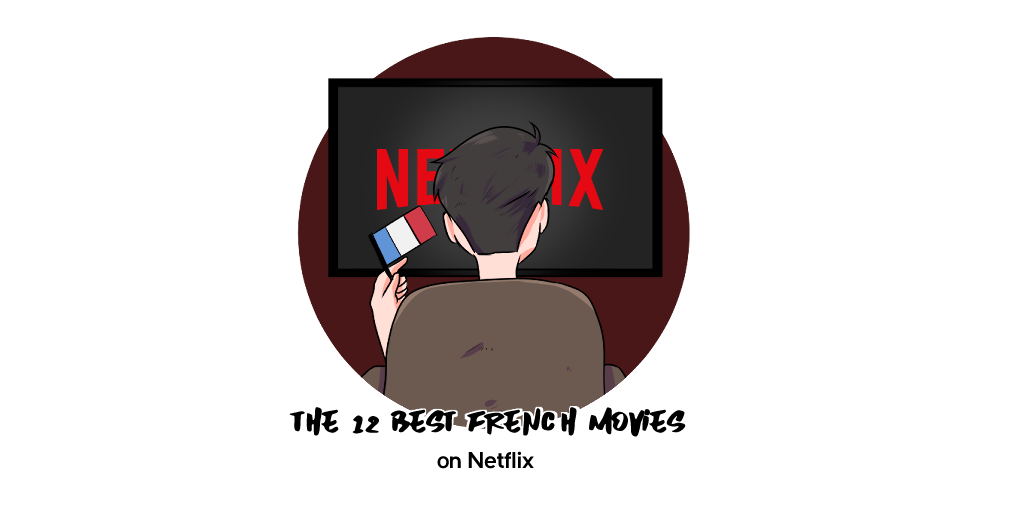 Watching French movies while you are learning French can help your acquisition of language greatly. It can work in a similar way to immersion.

Watching French films helps develop your listening skills because you will hear the actors and actresses talking and you can either follow along with subtitles in your native language or try to pick out what phrases you can understand depending on your skill level.

Another way watching French movies can help you is that you will be learning and seeing more about French culture. As with most art forms, films are influenced by social issues that are affecting people at the time of their creation, so you will be able to learn more about what is going on in the country.

The Climb or L’Acension is a French comedy that follows Sam, an unemployed Senegalese Frenchman, who makes the decision to climb Mount Everest to impress his love interest, Nadia. He undertakes this challenge despite not having any experience with climbing mountains.

The Most Assassinated Woman in the World or La Femme La Plus Assassin du Monde is a mystery thriller that is loosely based on French actress, Paula Maxa’s life. As such it gives viewers an insight into what the French theatre was like in the 1930s.

The film is set at the Grand Guignol Theatre in Paris, where Paula (played by Ana Mouglalis) works and has acted out several death scenes over the years. It is while she works here that there is a serial killer roaming the city which draws a few parallels to her work, and her stalker could be far more dangerous than first thought.

I am Not an Easy Man or Je ne Suis pas Un Homme Facile is a comedy directed by Éléonore Pourriat. This film portrays the feminism movement and the stereotypical gender roles in a funny way.

The main character is a man called Damien, who is a chauvinist who likes to express his “dominance” in front of women. Damien hits his head and passes out, when he awakes, he is in a different matriarchal world, where the gender roles have been reversed and he is faced with the same sexism he has been showing women.

Despite the topics that are covered, the film is overall a rather enjoyable and light-hearted watch.

I Lost My Body or J’ai Perdu Mon Corps is an award-winning animated film. It is a slightly gruesome concept that was loosely based upon the book Happy Hand by Guillaume Laurant and follows a severed hand on its mission to reunite itself with the rest of the body. A lot of the film is shown through flashbacks of the person’s (Naoufel) life.

In 2019, this film won the Critics’ Week Grand Prize at Cannes but lost to Toy Story 4 when it was nominated for the Best Animated Feature at the Academy Awards.

If you like action thriller films, then Lost Bullet or Balle Perdue is right up your alley. The film was directed by Guillaume Pierret and released in 2020.

The story follows Lino, a car mechanic, who is accused of murdering a cop, Officer Charas, and has to prove his innocence by finding a “lost bullet”. He knows that he has been framed and must find this one piece of evidence to exonerate himself so takes the mission on himself.

The African Doctor or Bienvenue à Marly-Gomont is set in the small village of Marly-Gomont and inspired by one of the writer’s (Kamini’s) father whose family were the only black family living there.

The main character, Seyolo Zantoko, has just finished medical school and moves his family to this rural village. It is another French film which handles a difficult topic in a satirical way, showing acceptance and love in a small community.

Nothing to Hide (Le Jeu)

Another French comedy is Nothing to Hide or Le Jeu. Everyone has secrets, you can know someone for years and still not know everything there is to know about them, this film delves into the unknown.

Seven friends, two couples and a single man, get together for a dinner party and create a bet where they have to show every photo, text, and phone message on their mobiles. This is not a game that should have begun and slowly but surely secrets are revealed.

School Life or La Vie Scolaire is a new take on an old trope. We follow the main character, Samia, who is the new headteacher at a school, trying to motivate some students who have been categorised as lost causes.

The World is Yours (Le Monde est à Toi)

If you like comedy films involving crime sprees, then The World is Yours or Le Monde est à toi is a good French film for you to start watching.

The film revolves around a small-time drug dealer named François who dreams of leaving the job behind and starting on a legitimate business dream. A spanner is thrown in the works when it’s discovered that his mother has thrown out his savings, so he has to go on one final job.

Based on a novel written by Olivier Adam, Des Vents Contraires (Headwinds) follows Paul Anderen as he relocates with his two children back to his hometown. He and his wife, Sarah, were having some troubles in their marriage, her being the main breadwinner and him wanting to focus on his writing, when she disappeared.

Follow the Anderen’s as they move back to Paul’s hometown on the French coast and learn how to adapt without their wife/mother.

C’est Quoi Cette Famille (We are Family) focuses on the potential of mixed families in a comedy setting.

Jour J or Wedding Unplanned is a romantic comedy which follows the wedding planning journey of Mathias and Alexia. The story is set in the South of France and demonstrates a well-known plot of a love triangle.

Alexia discovers a wedding planner’s business card in her partner’s pocket which leads her to believe that he is getting ready to propose. Little does she know that he is having an affair with the planner and just goes along with the charade so that he doesn’t get caught out.

As you can see, aside from the generic and typical genre, there are a lot of the French movies available on Netflix that tackle societal issues., These movies will help you understand the culture of the country a little more while being entertained.

If you are interested in different mediums in which you can gain the same understanding, we have more information on them here:

Or, if you are interested in finding out more about the films available for you when you are learning French, you can take a look at our collection of articles on them here, including lists such as 10 French Films that Men Would Love and 10 Child Friendly French Movies.

Above all, when watching these films remember not to become frustrated if you don’t understand everything that is being said. If you require subtitles, or if you need to continually pause the film so that you can think about the words you are hearing, that’s okay! It is all part of the learning process.